In 1909, an American newspaperman made an attempt to be the first to cross the Atlantic Ocean by air, in a dirigible originally designed for a failed expedition to the North Pole. 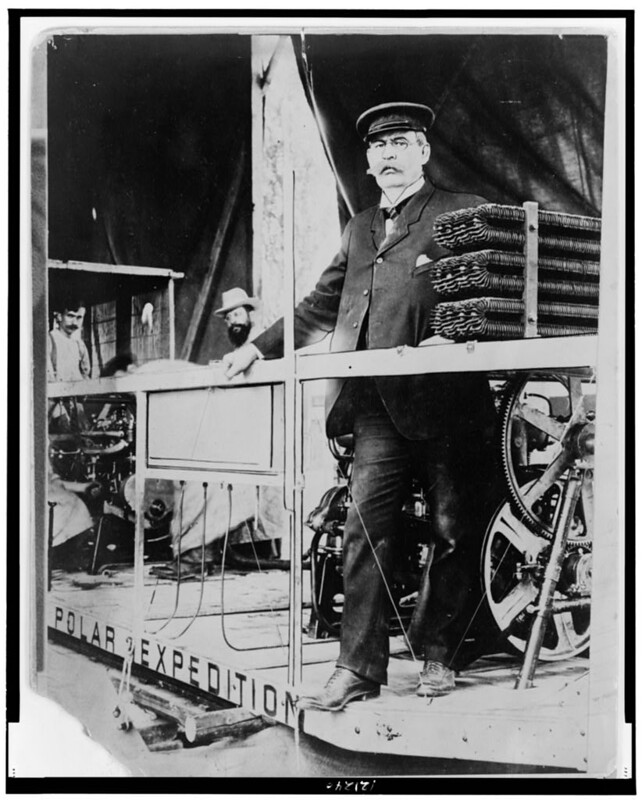 Walter Wellman on the “America”

The first attempt to reach the North Pole was in 1827, by Royal Navy officer William E Parry. His team was forced to turn back short of their goal. Over the next 70 years a dozen other attempts, by teams from America, Norway, and Italy, all failed. One of these hopefuls was Walter Wellman, an American journalist who owned the Cincinnati Evening Post and also wrote stories for the Chicago Herald. In 1894, 1898, and 1899, Wellman, financed by a consortium of newspapers, attempted to lead expeditions to the North Pole. Each ended in failure.

In 1905, Wellman changed his strategy: if he could not reach the Pole over land, he would instead try to reach it by air. The Wright Brothers had flown just two years before, and the primitive “aeroplanes” of the time were nowhere near capable of such a trip, but “airships” had already been flying long distances for a century, and Wellman decided that a dirigible airship was just what he needed. Raising money from a wide range of supporters, including several newspapers and President Theodore Roosevelt, Wellman went to France and commissioned the construction of a 165-foot airship to be christened America.

The dirigible was based on an island off the coast of Norway, but in July 1906, just before Wellman and his crew were to leave for the Pole, the engine failed. Sent back for repairs, the airship was lengthened by 20 feet and had a larger engine installed, but once again, when Wellman attempted a flight to the Pole in September 1907, he ran into weather after just 20 miles. After repairs were completed, another attempt in 1909 had to turn back after just 40 miles. Shortly after, word spread around the world that the American Robert E Peary had successfully reached the North Pole.

So now Wellman set his sights on a different goal: the first aerial crossing of the Atlantic Ocean. Working with his mechanic Melvin Vaniman, Wellman made extensive modifications to the America. She was lengthened to 228 feet and now had two engines: Wellman planned to run one engine at a time. The six-man crew was housed on a wooden scaffold called the “car” which was slung underneath the airship’s gasbag. The dirigible was also fitted with an odd-looking “tail” made of wooden floats and gasoline-filled tanks which extended down to the water. Called an “Equilibrator”, it was intended to use buoyancy to keep the America at a constant altitude of about 200 feet above the water and, Wellman hoped, would eliminate the need to carry sandbags as ballast.

At almost the last minute, Wellman also decided to add a new piece of equipment: a wireless radio set for communication with the ground. To operate the radio, Wellman hired Jack Irwin. Since there was no more room in the “car”, Irwin and his radio set were placed in the airship’s 27-foot-long emergency lifeboat, which dangled from cables underneath.

On the morning of October 15, 1910, the America was ready to depart from its base in Atlantic City NJ. Wellman planned to follow the shipping lanes, and would be accompanied the entire way by a chartered boat carrying journalists to cover the trip. When asked where he planned to land, Wellman, knowing that his ship was at the mercy of the winds, simply replied, “Any spot between Gibraltar and the North Cape will look good to us.”

As the crew boarded for takeoff, they were accompanied by an unexpected passenger. Navigator Murray Simon, a career sailor who had been recruited from the White Star liner Oceanic, told Wellman that, by long sea-going tradition, a ship had to have a cat aboard for good luck, so he had adopted a stray cat that was lounging around the hangar, named him “Kiddo”, and was bringing him along. The America set off at 8am.

At first, the flight went well—the only problem was Kiddo. The airship was anything but a smooth ride, and the poor cat was apparently terrified. Just 15 minutes into the flight, Murray noted in his navigation log that Kiddo was “rushing around the airship like a squirrel in a cage”. He quickly found his way down into the lifeboat where Irwin was manning his radio. The combination of frantic cat and electrical equipment inside a small confined space, Irwin recalled, was “driving me mad”, and he shouted up to the rest of the crew that Kiddo was “raising hell”. Then, in what very well may be the first known air-to-ground radio communication, Irwin tapped out a message to the radio operator in Atlantic City: “Roy, come get this goddamn cat”.

After a few hours, Kiddo had become such a nuisance that the crew had a meeting to decide what to do with him. Despite Simon’s vigorous defense (“We can never have luck without a cat on board”, he declared), the rest of the crew voted to kick the kitty out. So in a short time Kiddo found himself tied inside a canvas bag, being lowered from the airship by rope to the journalists’ boat following them on the Atlantic, 200 feet below. Regrettably, the seas were pretty rough, the bag got dunked a couple of times, and the small boat was not able to get underneath the long rope to snag it. Reluctantly, Kiddo was hauled back up to the America.

But the experience had apparently produced a change of heart in the now dripping-wet cat. In his log, Simon concluded that the kitty had realized “he could have been in a worse place than an airship”, and he now settled down. Simon later recalled that Kiddo “began to behave himself fairly well” for the rest of the trip.

Unfortunately, it would be a short trip. Just four hours into the flight, as the America cruised along at a stately 20mph, one of the engines failed. The ship continued on its remaining engine, but after two days it was apparent that the “Equilibrator” device wasn’t working as planned. Lacking ballast, the crew had no choice but to drop fuel instead to lessen the weight and maintain altitude. Then the wind changed direction, blowing against them. It became apparent that, despite the “good luck” that Kiddo was supposed to be providing, they would not be able to make it across the Atlantic.

On his radio, Irwin sent out a “CQD” emergency message (the distress code “SOS” had not yet been adopted). He got no response. But during the night the America passed over the RMS Trent, a British steamer. Communicating first by Morse lamp and then by radio, Wellman told the Trent’s Captain that he was going to abandon the airship and needed help. Settling the America just a few feet above the water, the six-man crew (and Kiddo) piled into the lifeboat and lowered it to the surface. When they cut it loose, the airship drifted up and out of sight. It was never recovered. Wellman and his crew were taken to New York.

There, despite their failure, they became public heroes. Wellman never made another flight, and retired from the newspaper business to write a book about his adventure. His engineer, Vaniman, would make another attempt to cross the Atlantic, in an airship called the Akron in 1912; the dirigible caught on fire and all aboard were killed. In 1936, Wellman’s navigator, Simon, would be a passenger on the maiden voyage of the German trans-Atlantic passenger zeppelin Hindenburg.

As for Kiddo the cat, he became a celebrity too. After being exhibited for a time in the front window of the Gimble’s Department Store in New York City, he was adopted by Wellman’s daughter Edith, and quietly lived out the rest of his nine lives.

6 thoughts on ““Come Get This Goddamn Cat”: Kiddo’s Failed Trip Across the Atlantic”