When we think of “antiwar movements”, we usually picture Vietnam, or perhaps the wars in Afghanistan and Iraq. But the reality has been that most of the wars fought by the US provoked intense anti-war responses. And one of the first anti-war movements in the US centered around the War of 1812. 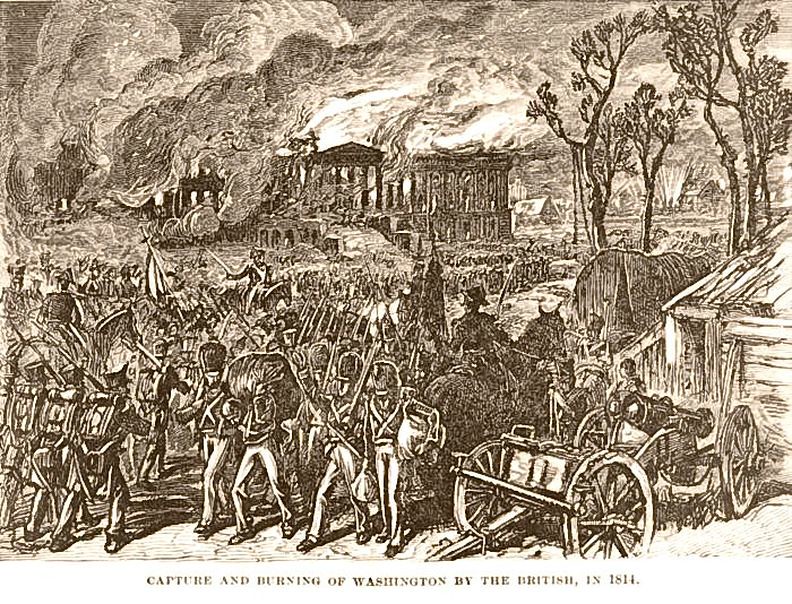 The War of 1812 has been mostly forgotten in the US. At the time, it was a war that many thought should not have been waged. It was, however, a major event: it precipitated the American invasion of Canada (and an attempted retaliatory invasion of America by Canada), it led to the capture and burning of the American capitol in Washington DC, it saw fighting in virtually every state of the US that was a state at the time (and a few that weren’t), and it marks the last time that foreign troops ever entered and fought inside the continental United States (though much of the fighting actually took place in Canada). Yet, it was also a war with an ambiguous end and no clear winner—and the United States of America does not like to celebrate or remember wars it did not win.

At the time, the war with England was called “The Second War of American Independence”. This assertion is something of an exaggeration, however, since the British, though still smarting from the loss of their holdings in North America, never had any real intention of re-conquering their former colonies in the United States. It also neglects to mention the fact that it was the US who started the war. At the time, England was already embroiled in a life-or-death struggle with Napoleon’s army in Europe, and there was a real chance that the French could cross the English Channel and invade the British Isles. The British neither sought nor welcomed an additional military conflict in faraway North America, and always treated the “American War” as at best something of a nuisance and sideshow, and at worst as a dishonorable stab in the back from the United States while England was locked in a titanic struggle to defend all of Europe against Napoleon’s regime.

Indeed, the War of 1812 was politically unpopular even within the United States. Thirty years after independence, the American economy still had extensive ties to Great Britain, and many of the commercial class were opposed to the conflict—some simply out of a pure greedy desire to avoid having their profitable overseas trade interrupted. The Federalist Party openly opposed the conflict, referring to it as “Mr. Madison’s War”, and throughout the fighting there was constant partisan bickering over it between the Federalist and the Democratic-Republican parties.

On the other hand, a sizable faction in Congress, led by Senators Henry Clay and John C Calhoun and calling themselves the “War Hawks”, had already been advocating the invasion of British Canada to seize the entire territory for the United States, concluding that the US had been unfairly robbed of that area under the Treaty of Paris (in which England had recognized the independence of the Thirteen Colonies). It was the beginning of an expansionist ideology that would, over the course of the 19th century, push the American border across the entire continent and lead to war with Mexico, war with Spain, several near-wars with England, and the extermination of hundreds of Native American nations.

The causes of the War of 1812 are complex and tortuous, and it is not clear how many of the reasons the US cited for its declaration of war were real grievances and how many were just after-the-fact excuses for an expansionist desire to invade Canada.

The most commonly-cited reason for the war was the British Navy’s practice of “impressment”. The Royal Navy was well-known for its harsh discipline and its sometimes brutal treatment of sailors. So it was no surprise that during the Napoleonic Wars the desertion rate was high, as British seamen jumped ship and signed on with private merchant vessels, including American, which offered better pay and conditions. To stem these losses, the Royal Navy began stopping merchant ships (especially American) on the high seas and searching for any British deserters. Those that were found were “impressed”—forcibly taken back into Navy service. Not only were the Americans angered by this violation of their neutrality, but many times the British would impress sailors who were not deserters—and sometimes not even British, but American. In one incident, a British warship stopped the US Navy frigate Chesapeake and demanded to search her for deserters: when the Chesapeake refused, the British ship opened fire, killing three crewmembers.

In 1805, after defeating the French Navy at the Battle of Trafalgar, the British imposed a naval blockade on Europe, closing most of the enemy ports to all traffic—including American. Any neutral ship carrying supplies to France first had to stop in a British port and pay a duty. Once again, the US protested its neutrality and resented the blow to its overseas trade.

War with England might have come then and there had not the cooler head of Thomas Jefferson prevailed. He argued that the United States was simply not strong enough to engage England or the Royal Navy in open combat, and pointed out that if the French under Napoleon managed to beat the English, the American grievances would disappear on their own. As an act of protest, though, Jefferson passed an embargo law that banned American ships from trading in Europe, but this caused so much resentment in the US itself that it was repealed not long after.

The final source of conflict was in the “Northwest Territories”, centered in present-day Ohio. Looking to expand westward and drawn by rich farmland and river trade routes, American settlers had begun illegally pouring into this area, to the resentment of the various Native American nations who already lived there. The inevitable result was conflict, as resistance came from a powerful confederation of Natives under the war leader Tecumseh. The Americans accused the British, who had long been vocal in their opposition to US expansion westward, of not only providing weapons and supplies to Tecumseh’s warriors, but of actively encouraging Native resistance all along the American borders in the north and south.

In 1809, President James Madison took office, and the political atmosphere changed. With the Democratic-Republican Party now in control of Congress by a thin margin, the influence of the War Hawks grew, and the voices calling for war with England became louder. On the Senate floor, Henry Clay declared that the United States could invade and occupy all of Canada in just four weeks. Ex-President Thomas Jefferson, who had earlier opposed war because of American weakness, now thought that the conquest of Canada was “a mere matter of marching”. In February 1812, Congress authorized the raising and training of 50,000 volunteers for Army service. Only 7,000 were ready when the formal American declaration of war came on June 18. The invasion of Canada began within weeks.

In the Federalist stronghold of Massachusetts, the state government ordered flags flown at half-mast to protest the “unjust war”. In the Senate, Daniel Webster expressed the thoughts of most New Englanders when he told the War Hawks: “Public opinion, strong and united, is not with you in your Canada project … The acquisition of that country is not an object generally desired by the people.” At one point, there was even talk in New England of secession, and two regiments of US troops were sent to Hartford CT in case they were needed to put down a rebellion.

Finally, one of the policies adopted during the war became a particular source of social friction in the South: the British commanders in Maryland, Georgia and the Carolinas announced that any African-American slave who joined them and fought on the side of the English would be granted their freedom within the British Empire. Thousands of slaves took up the offer. To the southern whites, who feared nothing so much as black slaves with guns, this was a direct challenge to the entire social order, and was a prelude to the Civil War that was soon to come. For the slaves who took up arms, most eventually ended up in Canada or the British colonies in the Caribbean.

By the time the peace negotiations in Ghent ended the war, none of the initial causes mattered any more. The end of the war with France removed British trade blockades and impressment as issues. The death of Tecumseh and the collapse of his confederation, along with the defeat of the Red Sticks in the southeast, removed the Native American nations from the chessboard. All that remained to argue over were borders, and the military blunders and failures on both sides meant that there were virtually no territorial conquests to deal with. The borders remained the same as they had been before the war started. There was no winner.

There was, however, a clear loser. The Native American tribes, who had already been largely pushed out of the east coast by the Americans, were, in the beginning of the war, a serious military force, fighting against the Americans near the Great Lakes and also in the Southeast. The British were making plans to establish a large independent Native American homeland, running from the Ohio River valley all the way to what is now Michigan, and perhaps a second Native Nation in the Southeast, which would not only reward Britain’s allies but would also serve as a bulwark against American expansion to the west. Instead, the Native Americans east of the Mississippi were, at the end of the war, landless and powerless, no longer able to govern themselves on their own land base.

In the end, the War of 1812 was a near-disaster for the US and accomplished nothing. And today, with the exception of New Orleans and the National Anthem, the war is completely forgotten by Americans. In Britain, moreover, the war is just as obscure. “1812” is remembered for the French invasion of Russia during the bitter war with Napoleon, not for the faraway fighting in North America.

It is instead in Canada that the War of 1812 is remembered. In 1783, after the independence of the United States, a flood of thousands of colonial Loyalists fled the hostility and resentment against them in America, and settled in Canada. There, with the French and the Scots and the Germans and others, they built an independent country of their own, and when the United States invaded three decades later in 1812, the Canadians, in a defining and uniting moment of national identity, fought back, defended their own soil—and won.