After the adoption of the US Constitution in 1789, one of the first tests faced by the fledgling United States of America was a rebellion of farmers in Pennsylvania. 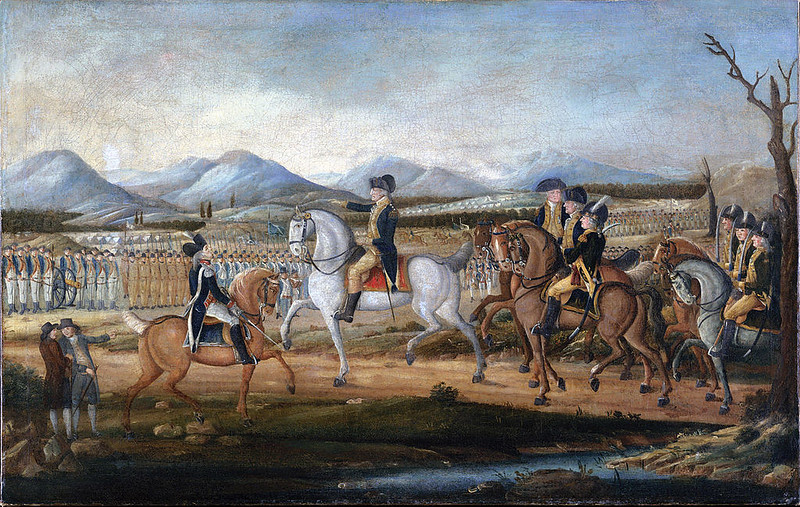 President Washington leads the militia to confront the Whiskey Rebellion

By 1791, the United States was deep in debt. The Continental Congress had borrowed heavily from France and Spain to finance the Revolutionary War, and under the Articles of Confederation, the US Government had no authority to impose taxes and had no way to pay those debts. The Constitution adopted in 1789 tried to fix that problem by strengthening the Federal Government and giving it the ability to impose taxes, but the idea was still unpopular.

In 1791, Alexander Hamilton, the first Secretary of the Treasury, successfully argued for Congress to pass a new tax to raise money for paying the debts—an excise tax on distilled liquor. The measure provoked fierce debate between the Federalists (who supported a strong Federal government) and the anti-Federalists (who supported the sovereignty of the individual states). In the end, the Whiskey Tax passed by a vote of 35-21. The tax was set on a sliding scale of six to eighteen cents per gallon, and Federal revenue agents were appointed in each location to collect it.

The larger distilling companies in cities like Philadelphia and Charleston simply paid the tax and passed the cost on to their buyers. But in what was then the western United States, especially in the Ohio River Valley in western Pennsylvania, the tax was a severe hardship for the small local farmers. Since they had no efficient tranportation network to sell their corn and rye in the big cities, they often brewed much of their crop into whiskey instead, which was easier to transport and sell. That meant they were subject to the tax.

That was not the only difficulty, however. Since they lived mostly as subsistence farmers, most of the people in this area of the country had no source of ready cash, and lived in a sort of barter economy where whiskey often served as a useful medium of exchange. So not only were many farmers there saddled with the Whiskey Tax—they had no cash with which to pay it.

It was no surprise, then, that opposition to the tax was rampant among the small agrarian towns on the western frontier. Many farmers simply refused to pay. In some places, revenue agents who tried to collect the tax were beaten, and some were even tarred and feathered.

On September 15, 1792, President George Washington was forced to act: he issued a proclamation condemning the “interference with the laws of the United States”. Congress tried to defuse the situation by making some modifications to the law, but the “Whiskey Rebellion” continued to grow.

The center of the rebellion was southwestern Pennsylvania. Farm communities in this area were already displeased with the failure of the US Government to protect them from raids by the British-backed Native Americans in the “Northwest Territory”, into whose lands the American settlers were steadily encroaching. The new tax was more than they could take, and open rebellion broke out.

In the summer of 1794, a US Marshall was sent from Philadelphia to both enforce the tax and calm the rebellion. Tax protesters were issued writs to appear in the Federal Court in Philadelphia—three hundred miles away—which simply added more fuel to the fire.

The situation exploded on July 15, 1794, when farmer William Miller was served with a writ to appear in court for refusing to pay the tax. A crowd of armed neighbors quickly gathered, and although shots were fired, nobody was injured, and the two revenue officers made their escape. The next day, another armed mob made its way to a house where they thought the local revenue agent, John Neville, was staying, and in the resulting fracas one of the farmers was killed. Then on July 17 an even larger mob returned; this time the house was guarded by a group of Federal soldiers from Fort Pitt, and in the shootout, another farmer was killed. The outnumbered soldiers were forced to surrender, however, and the house was burned to the ground.

With the outbreak of violence, the Whiskey Rebellion spread. Local leaders sympathetic to the rebels called out the militia in support, and a call was sent for rebellious militia units to gather at Braddock’s Field, near Pittsburgh. Now faced with armed insurrection, President Washington met with the Governor of Pennsylvania in the first week of August, then issued a declaration both calling for the rebels to “disperse peaceably” and authorizing the State Militia to act under Federal control to put down the rebellion and, as Washington put it, “cause the laws to be duly executed”.

Because the militiamen in Pennsylvania could not be trusted (many were sympathetic to the tax protesters), militia units were sent to Pennsylvania from neighboring states. In all, some 13,000 troops entered Pennsylvania and made their way to Carlisle, near the state capitol in Harrisburg. Treasury Secretary Alexander Hamilton was placed in charge of this mobilization.  His plan was to move on the rebels as quickly as possible, hoping to end the rebellion before winter would force he withdrawal of the troops and give the insurgency time to grow.

In September, Washington made a final attempt to end the situation peacefully, by sending a group of government officials to meet with the rebel leaders. But the talks went nowhere. When the government representatives returned on September 24, they reported that “it was absolutely necessary that the civil authority should be aided by a military force”. Washington himself then traveled to Carlisle to take personal command of the army there. Once the troops reached the town of Bedford in western PA, Washington left General Henry “Lighthorse” Lee, former Revolutionary War hero and now Governor of Virginia, in command. Treasury Secretary Hamilton also remained with the troops.

In late October, the federalized militia moved in. The armed rebel mob, realizing that it could not stand in combat with this military force, melted away. By mid-November, at least 150 people had been arrested, and the Whiskey Rebellion was all but ended. On November 29, General Lee issued a “general pardon and amnesty” for all the rebels—with the exception of 33 specific individuals who were named as ringleaders. Some of these were arrested, but many of them fled. A regiment of militia remained in the area for several months until it was clear that the insurrection was finished.

In the end, most of the arrested rebel leaders were released without trial. Only two, named Philip Weigel and John Mitchell, were convicted of treason, and they were both pardoned by President Washington a year later as a gesture of reconciliation.

But although the armed resistance to the whiskey tax had been crushed, political opposition continued. The anti-Federalist faction, led by Thomas Jefferson, made the issue of Federal taxation a campaign issue in the 1800 election, allowing him to win the White House. The whiskey tax, and all other internal excise taxes, were repealed in 1802. There would be no more direct taxes on Americans until the War of 1812—including a new tax on whiskey in 1814.

The most lasting effect of the Whiskey Rebellion, however, was on the nature of the Federal Government itself. Although the Constitution had been specifically written to expand and strengthen the role of the Federal Government, there were still many who opposed this and who wanted the State Governments to have the larger role. Washington’s actions during the Whiskey Rebellion established, both legally and in reality, that Congress had the right to impose taxes, that Federal law superseded any state laws and state government, and that the Federal Government had the right to use the military in order to enforce its provisions.

6 thoughts on “The Whiskey Rebellion”