In the first century CE, an uprising against Roman rule on the island of Britannia was launched. In a short time, the rebels had wiped out a Roman army, sacked two towns, and burned the Roman city of Londinium to the ground. And even more horrifying to the Romans, the British rebels were led by a woman. 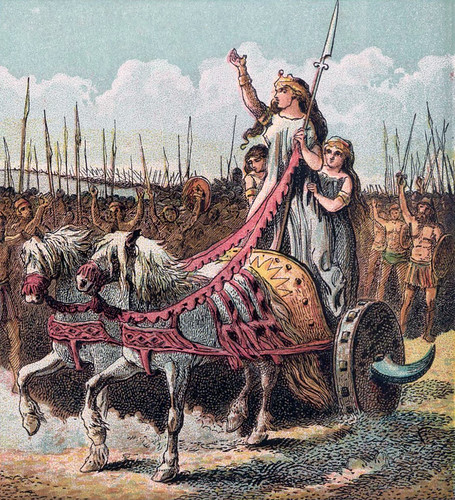 Tiberius Claudius Nero Germanicus had never been intended to be the Emperor of Rome. During the reign of his nephew, Emperor Gaius Germanicus (known to history by his boyhood nickname “Caligula”), Claudius, who suffered from birth defects including a deformed foot and a stutter, had been kept carefully out of public view. In 41 CE, the Praetorian Guard, bodyguards to the Emperor, killed the insane Caligula and ended his bloody rule. Searching the dead Emperor’s house, they found a terrified Claudius hiding behind a curtain, certain that the Praetorians would murder him too. Instead, they shocked Claudius (and most of Rome) by hailing him as the new Emperor.

Although completely unprepared for his new role as ruler of one of the largest empires in the world, Claudius turned out to be a remarkably good leader, restoring stability and prosperity after the erratic years of Caligula. But, the new Emperor knew, he was politically vulnerable because he lacked the one thing that was essential for any Roman leader to earn respect–a victorious military campaign.

His opportunity came in 43 CE, when a minor chieftain of one of the Celtic tribes in the far-off island of Britannia was overthrown by a rival and approached Rome for help. The great general Julius Caesar had crossed the English Channel and briefly occupied a part of Britannia 100 years before, but the island was inhabited by dozens of tribes who were hostile to Rome as well as each other, and Caesar decided to leave rather than try to deal with them. If Roman Legions under Claudius could conquer Britannia, where even the legendary Julius Caesar had failed,  he would win the respect of the Roman people and his position would be secured. Also, Claudius knew, the island had large deposits of tin and other materials that made it valuable.

When the Roman Legions landed, they were met by a coalition of several tribes, led by the King of the Catuvellauni known to the Romans as Caractacus. For almost ten years, Caractacus fought a hit-and-run guerrilla campaign, until he was finally captured and taken to Rome to be executed. According to legend, as Caractacus was being led in chains through the streets of Rome, he looked around in awe at the magnificent city and asked his captors, “When you have all this, why do you begrudge us our poor hovels?”

Not all of the Celtic tribes opposed the Romans, however. Some of the tribes in Britannia were already trading with the Roman province of Gaul, in modern-day France, and they promptly became “clients”, placing themselves under Roman authority but being allowed to keep their own laws and rulers. One of these was the Iceni tribe. At the time of Claudius’s invasion, the Iceni were ruled by King Antedios, who at first submitted to the Romans, then later joined the rebellion of Caractacus and was apparently killed while fighting. He was succeeded as King of the Iceni in 50 CE by Prasutagus, who once again placed the tribe under Roman control as a client. For the next ten years, Prasutagus was able to maintain the autonomy of the Iceni while the tribe prospered through trade with the Romans.

In 60 CE, however, Prasutagus died. In his will, he attempted to maintain the autonomy of the Iceni by naming his two daughters as his heirs, but specified that they rule jointly with the Roman Emperor Nero. Instead of maintaining peaceful relations, however, the terms of the will shattered them. Under Roman law, women could not inherit political office, and so Nero declared the terms of the will void and claimed full authority himself over all the Iceni lands, and sent a retinue of Roman officials to take over. There are two different versions of what happened next. In one tale, the Romans tried to demand repayment of a large loan that had been made to Antedios and/or Prasutagus, and when this was refused, Legionnaries sacked a number of buildings to get the money. In the other (more often-cited) version, the wife of Prasutagus, a strong-willed woman named Boudicca (also sometimes given as Boudiccea), resisted the Roman Procurator when he came to take possession of the Iceni royal property on behalf of Emperor Nero, and in response to this insubordination the Procurator ordered Boudicca flogged and allowed his troops to publicly rape her two young daughters.

Although Boudicca did not have any legal position of authority within the tribe, she proved to be a natural leader, and was able to rally the Iceni to rebellion against the Roman takeover. She was also joined by the neighboring Trinovante tribe, and together they made plans for an uprising. When the Roman Governor, Gaius Suetonius, was away with most of his legions suppressing another rebellion, Boudicca saw her chance to strike. Under her leadership, the Iceni/Trinovante army marched on the nearby Roman town of Camulodunum and destroyed it, killing every Roman they found. When 2500 Roman troops from the Ninth Legion were sent to re-take Camulodunum, Boudicca’s forces met them on the way there and ambushed them, killing some 2,000.

By this time, word of the Iceni rebellion had reached Governor Suetonius, away with his army, and he hurriedly marched his 10,000 men, including the Fourteenth and Twentieth Legions, to Londinium. Since the city lacked any defensive walls or fortifications, Suetonius decided that it could not be defended, and left, taking any civilians who wanted to go along with him. By the time the Celts reached Londinium, it was mostly abandoned, but the rebels killed everyone remaining and burned the entire city to the ground. After that, the Celtic army destroyed the nearby town of Verulamium, then turned to pursue Suetonius and his Legions.

Suetonius, meanwhile, had chosen a place where he would stand and fight (historians are unsure exactly where the battle site was, but have always assumed it was somewhere near London along the old Roman Watling Road, now the modern Route A5). He placed his army at one end of a deep valley with a thick patch of woods behind him. Boudicca, whose forces were several times larger than the Romans, confidently expected victory. Her forces gathered at the other end of the valley, where they placed their baggage wagons as well as the camp tents housing their women and children. Boudicca may have been an inspiring leader, but she was not a military tactician, and the position she had chosen was a lethal one.  In the steep-sided valley, she could only approach from one direction, was unable to bring her greatly-larger number of fighters into play, and could only attack on a narrow front, where the Roman’s superior discipline and armor proved decisive. The front ranks of the Celtic army were decimated, and when the rear ranks broke and ran, they were trapped by their own wagons and campsite which blocked their way out of the valley. The Romans systematically slaughtered them, including the women and children in the camp. Only a small group of Iceni was able to escape.

Boudicca’s fate is unclear. According to the Roman writer Publius Tacitus (whose father-in-law had been a Roman soldier under Suetonius in Britannia at the time and probably told him the story), Boudicca killed herself after the defeat, by taking poison, to spare herself the shame of being taken in chains to Rome for execution like Caractacus had been. But the later Roman writer Cassius Dio gives another version, stating that Boudicca was planning to raise another army and continue the uprising when she fell ill and died, perhaps as a result of infection from wounds received in the battle.

In the aftermath of the Iceni rebellion, the Romans rushed additional troops to the island and replaced Governor Seutonius. The situation settled, and Britannia remained a Roman province, without any further incident, until the Romans voluntarily withdrew in 410 CE.

The Boudicca rebellion had one other effect on Roman culture. Rome, one of the most patriarchal and testosterone-poisoned societies in history, found itself both repelled and fascinated by the idea that a woman could, even briefly, defy its authority, defeat its armies, and kill its citizens. To feed this public fascination, a unique group of female gladiators appeared, who on special occasions would thrill the crowds in the amphitheaters with what was to Romans the most exotic and strangest sight imaginable–a woman in combat.

Today, Boudicca has become a national symbol of British patriotism. A  statue of the “Warrior Queen” in her chariot stands next to Westminster Bridge in London.