In the history of the conquest of North America by Europeans and the dispossession of its original Native inhabitants, there are many frauds, swindles and cheats. One of the earliest was the Walking Purchase. 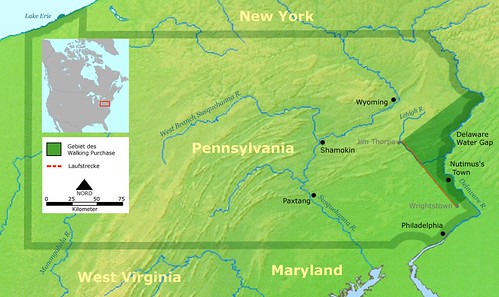 The area of the Walking Purchase

In 1681, a young man named William Penn had a meeting with representatives from the King of England, Charles II. The King had borrowed 16,000 pounds from Penn’s father, a wealthy merchant, and the 37-year old william was now calling in the debt. But the King’s coffers were low, drained by constant warfare with France, and so in lieu of cash, Charles II offered Penn a large tract of land in the English possessions in North America. Penn accepted, and the territory of “Penn’s Woods”, or “Pennsylvania”, became his own privately-owned colony. He gathered a group of adventurers and settlers, and sailed across the Atlantic.

Although under English law he had already been granted free title to the land, Penn was a Quaker as well as a practical man, and both his religious ideals and his business sense told him that it would be best if he were to pay a sum to the Natives who were already living in Penn’s Woods. These were the Lenape, a tribe who lived along the river that the Europeans had named the Delaware, and which name was soon applied by the whites to the Native Americans. The Delawares were under the political control of the powerful Iroquois Confederacy which held the territory to the north. In a series of treaties, Penn purchased several tracts of land in the Delaware River Valley, where he established the town of Philadelphia. A devout Quaker, Penn was scrupulously honest in his dealings with the Lenape, and they in turn began to refer to any white settler who treated the Natives well as a “quakel”.

But things changed in 1718, when William Penn died and the Pennsylvania colony was inherited by his three sons. The European population in Pennsylvania had grown during this time, and by 1735 there were already white settlements extending up the Delaware River, as far as the Lehigh River Valley. The settlers began pressuring the Penn brothers to obtain clear title to this land from the Lenape. The Lenape band which lived in the Lehigh Valley, however, led by Nutimas, refused to sell. Many of them had already moved to eastern Pennsylvania from New Jersey, across the Delaware River, to escape white encroachment, and they had no desire to move again.

In response, Thomas Penn resorted to some trickery. He found a draft agreement made by his father and the Lenape back in 1682, proposing the purchase of a tract of land north of Philadelphia to be measured “as far as a man could walk in a day and a half”–a distance of about 35-40 miles. The deal was never made and the agreement was never signed, but Penn now declared that it constituted a “sale”, and that he now had clear title to this land. When the Lenape under Nutimas protested that nobody had ever made such an agreement, the Penn brothers brought in representatives from the Iroquois Confederacy, who claimed authority over the Lenape, and had them sign an agreement giving up claims to most of the territory north of Philadelphia. When it became clear that the Iroquois would not support them, the Lenape had no choice but to submit to Penn’s “purchase”. To measure out the area to be sold, they agreed to accompany three whites in a walk northwest from Wrightstown: the border would be drawn from where these walkers stopped after a day and a half, to the Delaware River.

On the appointed day, September 19, 1737, it quickly became apparent that the Penn brothers were perpetrating a cheat. Unknown to the Lenape, Thomas Penn had sought out the three fastest runners in the colony, promising a large tract of farmland to whoever would travel the furthest. He also had teams of surveyors plot out the best course and had a pathway cleared of shrubs and rocks, allowing the “walkers” to run at top speed. Despite the Lenape protests that they were supposed to be walking, not running, the three runners set out on the morning of September 19.

The first runner, Solomon Jennings, made it only 18 miles before he dropped out, exhausted. After camping overnight for a few hours to sleep, the second runner, James Yeates, also dropped out (and died three days later). The third runner, Edward Marshall, continued on until noon on the second day. He had covered 65 miles.

And now another cheat occurred: rather than drawing the northern boundary of the purchase directly east from the point where Marshall stopped (near the present-day town of Jim Thorpe PA), the Penn brothers drew a line at a right angle to the walker’s path, extended it all the way to the Delaware River, and declared that to be the border. It nearly doubled the area to be “purchased”, to almost 1200 square miles of land, including the Lenape council center at Minisink, between the Delaware and Lehigh Rivers (where the modern cities of Allentown, Bethlehem and Easton are located). Once again, the Lenape tried to enlist the aid of the Iroquois Six Nations to right the wrong, but once again the Iroquois refused to help. Nutimas and his band moved out, eventually relocating to the area near present-day Pittsburgh.

But the Lenape never forgot the fraud that had been perpetrated on them. When the French and Indian War broke out in 1756, the Lenape in western Pennsylvania and Ohio joined with the French forces and returned to eastern Pennsylvania to raid the white settlements along the Lehigh, hoping to win back the lands they had been cheated out of. Among those killed were Edward Marshall’s wife, son, and daughter. But the defeat of the French and their Iroquois/Lenape allies in the war insured that the natives would be removed from all of the colony. Today, there are virtually no Delaware Indians living in Pennsylvania.

2 thoughts on “The Walking Purchase”