In 1940, things were looking bleak for England. France had fallen to the Nazis, the Luftwaffe was bombing London nightly, and the United States public was isolationist and keeping out of the war. But with great secrecy, the US government was already helping the British war effort, and one secret American action would later pay off spectacularly during the pursuit of a dangerous threat to Britain’s survival, the German battleship Bismarck. 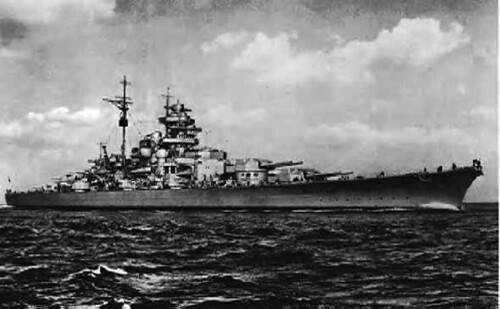 After the surrender of France in 1940, England remained as the only surviving challenge to Nazi Germany’s complete domination of Europe. To defeat Britain, the Nazis adopted a two-pronged strategy, by air and by sea. In the air, the Luftwaffe would wage the Battle of Britain, to destroy the RAF, give the Germans air superiority, and allow a cross-channel invasion of the British Isles. On the sea, meanwhile, the German Navy would wage the Battle of the Atlantic to destroy the English merchant fleet, cut off the crucial supply lines between North America and Britain, and choke off the English supply of food and war materials, forcing the island nation into submission.

Most of the attacks on British merchant shipping would be made by the U-boat fleet. But the German Navy also had two other significant weapons–the battleships Tirpitz and Bismarck. At a speed of 30 knots, they were the fastest battleships in the world at the time, and their 15-inch main guns were a match for any other battleship. But the Bismarck and Tirpitz were intended primarily as commerce raiders–they were intended to patrol the North Atlantic, intercept merchant convoys, and destroy them. When the Nazis turned their attention to England in the summer of 1940, the Bismarck had just been commissioned for duty, and the Tirpitz was nearing completion.

The British realized that if the Bismarck managed to reach the open Atlantic, her superior speed would make it extremely difficult to find and track her, and she would pose a serious threat to any supply convoys trying to cross the Atlantic. As a result, the British Navy made plans to intercept the Bismarck as soon as it left port, in an attempt to stop her from reaching the open sea.

At first, it was a waiting game. The Germans planned to form a single naval task force with both the Bismarck and Tirpitz and the cruisers Prinz Eugen and Gneisenau. But construction problems delayed the Tirpitz, and the Gneisenau was damaged in a bombing raid. For almost a year, theBismarck sat in port.

It was finally decided to wait no longer, and on May 19, 1941, Bismarck, accompanied by the cruiser Prinz Eugen, left the German port at Gotenhafen and made her way past Denmark towards the Atlantic. She was almost immediately spotted by a Swedish warship who reported the contact to the British. The Royal Navy dispatched a force, which included the new battleshipPrince of Wales and the battlecruiser Hood, to intercept the German ships.

When the two forces met on May 24, the result was catastrophic for the British. A single 15-inch shell from the Bismarck penetrated through the armored deck of the Hood and exploded inside the ship, setting off the Hood’s ammunition stores and completely destroying it. Hooddisappeared in an enormous fireball. Of the 1400 crew members, only 3 survived.

Over the next two days, the British ships engaged in brief firefights with the Bismarck, and managed to cause some damage. The German commander, Admiral Gunther Lutjens, evaded the British fleet in a series of nighttime maneuvers, and once free, decided to split up his two ships. The Prinz Eugen would continue to the Atlantic, while the Bismarck would turn and make a run to a port in Nazi-occupied France for repairs. The British Navy,  realizing that this was their best opportunity to destroy the battleship, dispatched more ships from its own fleet to the area, and began a series of frantic air searches to try to locate the Bismarck before she could reach safety in port.

It was here that the Americans entered the scene.

In 1940, US President Franklin Roosevelt knew that eventually he would have to fight the Nazis, and, despite the public’s sentiment against becoming involved in the European war, began taking steps to skirt the very edge of neutrality and give aid to the British. Under the “Lend-Lease” program, the US began to loan aircraft and ships to the British, with the expectation that they would be “returned” later. As part of Lend-Lease, the Americans gave the RAF 200 long-range Catalina PBY amphibious patrol planes, known as “flying boats”, to be used for coastal patrol and anti-submarine duty. But, in a secret part of this deal that was entirely illegal under American law, Roosevelt ordered the US Navy to send seventeen active-duty pilots to England along with the Catalinas. With the excuse that they were there to “train” the British pilots,  the US Navy fliers were “loaned” to the RAF’s Coastal Command 209th Squadron based in Northern Ireland, and immediately began flying combat missions. Usually, each PBY was flown by a British pilot with an American co-pilot.

When the Royal Navy lost contact with the Bismarck on May 26, 1941, the PBYs were hastily pressed into service to fly long-range patrols to find the Germans. Already loaded with depth charges for a routine anti-submarine patrol, one of these flying boats, commanded by RAF pilot Dennis Briggs and US Navy co-pilot Leonard “Tuck” Smith, was diverted to the search. They took off from Loch Erne at about 4 in the morning, and set out for the Bismarck’s last known position.

The weather was awful. A thick cloud layer descended to just a few thousand feet. After six hours of patrolling, Briggs and Smith saw nothing but clouds and empty ocean.

Then, at 10:10am, they caught a lucky break. Through a gap in the clouds, Smith sighted a large ship in the distance. “I sighted what was first believed to be Bismarck,” he later reported, “bearing 345 at 8 miles. Definite recognition was impossible at the time due to visibility. I immediately took control from ‘George’ (automatic pilot); started slow climbing turn to starboard, keeping ship sited to Port, while the British officer went aft to prepare contact report. My plan was to take cover in the clouds, get close to the ship as possible; making definite recognition and then shadow the ship from best point of vantage.” But in the clouds, Smith got too close, and when he broke into clear air at 2,000 feet, he was directly over the Bismarck. Smith barely had time to think to himself “My God, what have I done?” when the battleship’s anti-aircraft guns opened up on him. “The A.A. fire lasted until we were out of range and into the clouds. It was very intense and were it not for evasive action we would have been shot down. The barrage was so close that it shook the aircraft considerably (one man was knocked from his bunk) and the noise of the burst could be heard above the propeller and engine noise. Numerous bursts were observed at close quarters and small fragments of shrapnel could be heard hitting the plane.” While Smith jettisoned his depth charges and took evasive action, Briggs radiod the news to the Royal Navy. “‘One battleship.” he reported, “bearing 240° five miles, course 150°, my position 49° 33’ north, 21° 47’ west. Time of origin, 1030/26.” The Bismarck had been found. Smith shadowed the German battleship until he lost it again in the clouds and, with his fuel running low, turned back for home. By the time the PBY landed back at England, the Royal Navy had already dispatched 19 warships to converge on the Bismarck’s location.

Meanwhile, two unarmed Swordfish torpedo bombers from the nearby British carrier Ark Royalhad arrived, and were now shadowing the Bismarck and giving updated position reports. Admiral Lutjens frantically radiod to the German Navy: “Enemy aircraft maintains contact: wheeled aircraft!” Everyone knew that a “wheeled aircraft” could only have come from an enemy carrier, meaning that British ships were nearby. The Swordfish were soon joined by two more PBYs flying in shifts, both of them with American co-pilots.

But the British were almost too late. The Royal Navy battleships would not reach the Bismarckuntil after dark, when the Germans would likely be able to evade contact, slip through the British net, and escape to safety in a French port. In desperation, the British used the only weapon they had available, the obsolete canvas-covered biplane Swordfish torpedo bombers from the Ark Royal, in a desperate attempt to cause enough damage to the Bismarck to slow her down and allow the Royal Navy to catch up.

At about 3 in the afternoon, 15 Swordfish reached the battle area. But instead of attacking theBismarck, they mistakenly targeted the British cruiser Sheffield, which, due to a miscommunication, was in an area where the British pilots had been told there were no Royal Navy ships. Fortunately, all of the mistakenly-launched torpedos missed the cruiser, and the Swordfish returned to the Ark Royal, were refueled and re-armed, and launched again at theBismarck. It was 7:15pm and would be dark in just a few hours. They would not get another chance.

The “stringbags” droned in on the Bismarck at low altitude, skimming just above the waves.  Although several Swordfish were hit by anti-aircraft fire, none of them were shot down, and all of them managed to release their torpedos. Nearly all missed. One struck the Bismarckamidships, causing some slight damage to her heavy armor plating. But another torpedo struck the battleship at the stern end, near the propellers, and the shock wave from this explosion jammed the Bismarck’s rudders. It was an incredibly lucky shot. With her rudders jammed, theBismarck could not steer, and was now plowing along helplessly in a giant circle. She was soon shadowed by a number of British cruisers who, after a brief exchange of fire, carefully kept their distance. As the German crew tried frantically to repair the rudders and restore steering, the British Navy’s battleship fleet approached, arrving at around four in the morning.

The Bismarck was doomed. Torpedo-firing destroyers harrassed her all night, and at first light, the main British fleet moved in and opened fire. Around 11 am on May 27, after several hours of pounding, the German battleship rolled over and sank.

Shortly later, Ensign Leonard Smith was awarded the Distinguished Flying Cross for his actions in locating the Bismarck. But because his very presence at the scene was illegal and his mission was a closely-kept secret, it was decades before it could be openly acknowledged.