The United States is one of the few remaining industrialized nations that still executes criminals. And the ritual of the Last Meal says a lot about American culture. 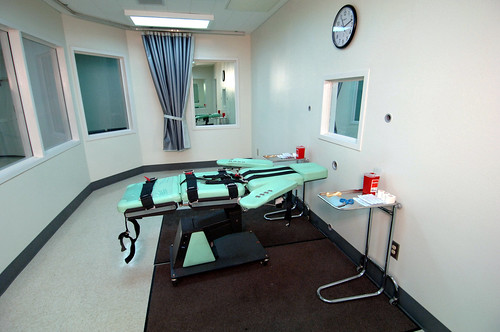 The custom of a Last Meal for condemned prisoners is believed to have begun in England in the 16th century. English law was harsh, and there were long lists of offenses for which the punishment was hanging, often for such minor crimes as insulting the King or stealing a chicken, or even witchcraft. The condemned were held in London’s Newgate Prison and were publicly hanged at Tyburn, three miles away. They were fed only bread and water. On the way to their execution, however, prisoners who could afford it (the rigid British class society extended even into prisons, where well-off prisoners from the upper and middle classes could buy better treatment than their lower-class counterparts) were offered a stop at the pub, accompanied by guards and the executioner, where they had “a great bowl of ale to drink at their pleasure, as their last refreshment in life.” It became known as the Hangman’s Meal. In addition to the Christian comfort it offered to the condemned, the ritual of the Hangman’s Meal also had a social role–it reinforced the idea that the impending execution was not a personal vendetta, but that the executioner was acting impartially as an employee of the Crown and was simply enforcing the laws of the land. By symbolically sharing a last meal together, the prisoner was assumed to be forgiving the executioner for what he was about to do, and also acknowledging that his crime was against the State, not against a person.

When the British colonies were established in the New World, however, the custom of the Hangman’s Meal seems to have disappeared. The first recorded execution of an Englishman in the American colonies was that of George Kendall, a resident of Jamestown VA who was shot by a firing squad in 1608 after being convicted of spying for Spain. Although that was a military affair, there are no recorded instances of a Hangman’s Meal for any of the colonists who were hanged or beheaded in the centuries after that.

In colonial America, executions were public affairs, usually carried out in the town square. They were intended as open warnings of what happened to people who broke the laws and as a deterrent to others, and were accompanied by public sermons on the evils of sin and bad morals. Large crowds of onlookers gathered round, often with picnic baskets, to watch the spectacle as the condemned criminal was sent on his way to Hell.

By the 1830’s, however, ideas about crime and punishment began to change. The focus began to move from mere punishment and retribution to a more enlightened goal of penitence and rehabilitation. Execution was eliminated for most crimes, and convicted prisoners were now placed in “penitentiaries” for fixed sentences, where they were given the opportunity to think about their actions, repent their sins, and emerge as law-abiding citizens. For the most serious crimes where it was thought rehabilitation was impossible, executions still remained, but they were no longer publicly-performed spectacles: they were now moved inside the prisons and carried out in private to emphasize that the condemned’s offense was against the State and its laws. The last person to be publicly executed in the US was convicted murderer Rainy Bethea, who was hanged in Kentucky in 1936.

And it was during this time that the practice of the Last Meal seems to have made its appearance. It was a part of a new ritual of the death penalty, intended to show that the State’s execution was being carried out impartially and humanely under the law, and that it was not motivated by mere vengeance or retribution. This new idea was reflected in the changing methods of death. Traditional methods of execution, such as hanging or beheading, were messy and crude. Now, “modern” methods were introduced which were felt to be more “humane”: first the electric chair, followed by the gas chamber, and on to today’s lethal injection, in which death is carried out as a medical procedure.

The Last Meal, then, is a part of the death penalty ritual that emphasizes its democratic nature: at Victorian Tyburn, only the well-off were given this final comfort, but in democratic America (where Death Row is populated almost exclusively by those from the poorer economic and racial groups), everyone is treated equally, impartially, and humanely under the law.

As a result, the Last Meals that are most often requested fall into two distinct categories which tell us a lot about American society. And it should be noted here that the publicized stories about “Last Meals” report what the prisoner requested to be served, not necessarily what he or she actually got. Many states have restrictions on last meals. In Florida, an inmate can order a Last Meal from local restaurants, but is limited to $40. In Oklahoma, last meal requests are limited to just $15. So while an inmate might request filet mignon and lobster, they are more likely to actually get hamburgers and fish patties. In many states, death row inmates are simply given whatever is on the prison cafeteria menu for the day of their execution. In Texas, the privilege of a Last Meal was eliminated in 2011, after convicted murderer Lawrence Russell Brewer asked for two chicken-fried steaks, a pound of barbecue, a triple bacon cheeseburger, one meat-lover’s pizza, three fajitas, one omelette, one bowl of okra, a pint of ice cream, peanut-butter fudge with crushed peanuts, and three root beers–then didn’t eat any of it. State lawmakers griped about the “wasted expense” and repealed the “Last Meal” option. It is, however, not unusual for condemned prisoners to not finish their last meal. Serial killer Ted Bundy refused to make a last meal request, and so was given a warden-selected meal of steak, eggs, hash browns, toast, milk, juice and coffee. He didn’t eat any of it. In Indiana, inmates are actually given their “last meal” three days before their scheduled death since, as prison officials explained, they tended to lose their appetite on the day of their execution.

Since nearly all Death Row inmates are from the poorer levels of American society, it is not surprising that many of the condemned request, as their last meal, the luxury foods that they were never able to afford in life. In 1835, Manuel Fernandez, one of the first New York prisoners to be hanged inside the prison walls instead of publicly executed, requested a last meal of brandy and cigars. Danny Rolling, a serial killer executed in 2006, asked for lobster tail, butterfly shrimp, baked potato, strawberry cheesecake, and sweet tea. Allen Lee Davis wanted a lobster tail, fried potatoes, fried shrimp, fried clams, garlic bread, and a liter of root beer. Alton Coleman requested a filet mignon with mushrooms, fried chicken breasts, salad with French dressing, sweet potato pie with whipped cream, French fries, collard greens, onion rings, cornbread, broccoli with cheese, biscuits and gravy, and a cherry Coke.

The last meal of Ricky Ray Rector in Arkansas in 1992 was controversial, as was his trial: after killing a police officer, Rector had attempted suicide by shooting himself in the head, and was so brain-damaged that anti-death penalty advocates argued that he should not be executed. Then-Governor Bill Clinton refused to stop the process, however, and for his last meal, Rector ordered a steak, fried chicken, cherry Kool-Aid, and a pecan pie. He didn’t eat the pie, but asked his guards to hold it for him so he could eat it later.

3 thoughts on “Last Meal: A Gustatory History of the Death Penalty”