The South American piranha has a reputation as a dangerous man-eater that can strip the flesh from a skeleton in minutes. Much of the blame for that reputation comes from a US President. But the reality is far different…. 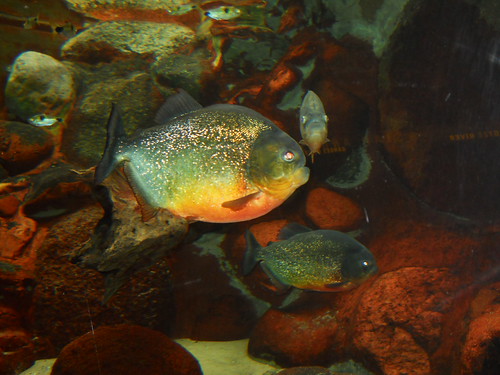 Red-Bellied Piranha on display at the Shedd Aquarium in Chicago

In 1913, former President Theodore Roosevelt, who had long been an avid sportsman, hunter and explorer in Africa, made plans to visit the remote Amazon rainforests in Brazil. The Brazilian Government was thrilled to have the ex-President visit, and arranged a grand guided tour of the deep jungle, accompanied by a retinue of newspaper reporters.

One of Roosevelt’s arranged stops was an un-named small tributary of the Aripuana River, which the explorer could “discover” and which would afterwards be named Rio Theodore Roosevelt in his honor. To illustrate the dangers of the wild river that he had found, Roosevelt’s native guides took a cow, cut its throat, and shoved it into the river.  Almost instantly, the river boiled with blood as hundreds of small fish, barely a foot long, swarmed around and inside the corpse, stripping the flesh from the bone in just a few minutes. The fish, Roosevelt was told, were called “piranha“, which meant “tooth fish” in the local Tupi language.

When Roosevelt returned to the United States, he penned a best-selling book about his adventures, titled Through the Brazilian Wilderness, in which he breathlessly told of “the most ferocious fish in the world”:

“The piranha is a short, deep-bodied fish, with a blunt face and a heavily undershot or projecting lower jaw which gapes widely. The razor-edged teeth are wedge-shaped like a shark’s, and the jaw muscles possess great power. The rabid, furious snaps drive the teeth through flesh and bone. The head with its short muzzle, staring malignant eyes, and gaping, cruelly armed jaws, is the embodiment of evil ferocity; and the actions of the fish exactly match its looks. . . If cattle are driven into, or of their own accord enter, the water, they are commonly not molested; but if by chance some unusually big or ferocious specimen of these fearsome fishes does bite an animal—taking off part of an ear, or perhaps of a teat from the udder of a cow—the blood brings up every member of the ravenous throng which is anywhere near, and unless the attacked animal can immediately make its escape from the water it is devoured alive.”

In his honor, the fish was named Rooseveltiella nattereri. (It has since been renamed.)

Roosevelt’s harrowing account established the piranha as one of the most feared fish in the world, and no Hollywood “jungle movie” was now complete without an incident involving the “man-eating fish”.

Unknown to the former President, however, the entire incident was a staged fake, set up by the Brazilians to satisfy the American big-game hunter’s thirst for excitement and adventure (and, perhaps, to put one over on the gringos). For weeks prior to the visit, native fisherman had captured hundreds of piranhas and stored them in a netted-in section of the river without access to food. Not surprisingly, the half-starved fish jumped eagerly at the first meal they were offered.

The truth about the piranha is far less exciting. The blunt reality is that there are no confirmed instances of any live human (or any other large animals) being attacked and eaten by a school of piranha. Ever.

The piranha, in the family Serrasalmidae, are exclusively South American, with the highest diversity, about 20 species, found in the Amazon River and its tributaries. They are also known by the native names piraya and caribe. Most of them are harmless scavengers. The “classic” piranha, the carnivorous pack-hunting fish which hunt live prey, consist of about 10 species found in three genera, the most well-known being the Red-Bellied Piranha (Pygocentrus nattereri) and the Black Piranha (Serrasalmus rhombeus). There are also several genera of exlusively vegetarian serrasalmids known as “pacu”, which feed on aquatic plants and fruits which fall into the river. (The popular aquarium Silver Dollars belong to this group.)

Most serrasalmids are less than a foot long; a few pacu species can reach two feet in length. The carnivorous species have blunt faces and short powerful bulldog jaws. Most species live in groups that can number up to 100. The three-lobed teeth can interlock between the upper and lower jaw and are extremely sharp, allowing each bite to remove a circular chunk of flesh about the size of a quarter. Their favorite hunting tactic is to approach from behind, bite off the tail fin of a fish to cripple it, then swarm around it to strip away the flesh. Although they will scavenge the corpses of large animals, most of their food consists of freshwater invertebrates and fish. An odd group in the genus Catoprion feeds on the slime of other fish, by sneaking up to them and nipping off a mouthful of scales.

It is far more likely for piranhas to be eaten by humans, than the other way around. In South America the fish are netted or caught with hooks, and eaten fried or baked. They are also prey for jaguars, herons, turtles, caimans, and larger predatory fish. Their typical schooling behavior is actually a defensive strategy, not a hunting tactic: the larger and older piranha are found in the middle of the pack, while the younger inexperienced fish are on the outer fringes where they are more likely to be eaten by predators.

In the United States, the Red-Bellied Piranha has long been popular in the aquarium pet trade (although the Piranha family has been outlawed in several states). The vegetarian pacu are also sometimes found in pet shops. Since these fish are extremely difficult to breed in captivity, nearly all of them are imported from the wild. Occasionally, reports turn up of escaped or released pet piranha being found in local rivers or ponds. So far, though, no breeding populations of introduced piranha are known to be in North America.

2 thoughts on “The Myth of the Piranha”