In the 1850’s, the coal mines of northeast Pennsylvania became a war zone, as miners struggled to unionize and the mine owners called in hired guns. One of these fights centered around a group that became known as “The Molly Maguires”. 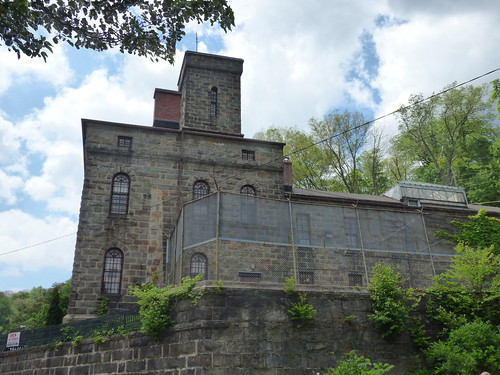 The jail in Jim Thorpe, Pennsylvania, where four of the Molly Maguires were hanged.

When the Potato Famines struck Ireland in the 1840’s, large numbers of poor working-class Irish emigrated to the United States, hoping to find economic security. Many of these settled in northeastern Pennsylvania, in an area of the Blue Mountains that became known as “The Coal Belt”. In 1860’s America, the Industrial Revolution was beginning, and coal was its fuel. Coal heated the homes, fueled the trains, and ran the factories. The entire American economy was dependent on it. And much of the nation’s coal came from Pennsylvania.

In the years after the Civil War, the Philadelphia and Pennsylvania Railroad Company was headed by Frank Gowen. A ruthless robber baron, Gowen hoped to buy up enough of the Pennsylvania coal mines to dominate the entire industry, providing cheap fuel for his railroad as well as extra profits for himself. Within a short time, Gowen owned two-thirds of all the coal mines in the region. In small coal-mining towns in Carbon, Lackawanna, Luzerne, and Schuylkill counties, where nearly everyone was an Irish immigrant and worked in the mines, Gowen’s coal companies and the railroads completely dominated everyone’s life. Men and children as young as eight worked in the mines and quarries. In Schuylkill County alone there were over 20,000 coal workers, one-fourth of which were children. Like other miners across the Pennsylvania anthracite region, they lived in company-owned housing, and they bought food in the company-owned general store (often paid for with company-issued private scrip instead of cash). The working conditions were unsafe, and deadly accidents were routine (in 1869, a coal fire in one mine killed 110 workers). The Catholic Irish were often the victims of ethnic and religious discrimination, and were channeled into the most dangerous, dirty, and low-paid jobs. The local police force was organized and paid by the coal company, and the local judges and politicians were all dependent on political support from the coal companies.

Meanwhile, the recession known as the Financial Panic of 1873 set in, and Gowen tried to protect his profits by cutting wages and speeding up production. To strengthen the companies against the workers and their unions, Gowen organized an industry cartel containing the other mining companies that he did not own, which set the wages and conditions for the entire area.

In response, the Irish miners began to organize. For hundreds of years, people in Ireland had been forming armed secret societies to fight the British landlords who dominated their country, so it was natural that many of the same methods were carried over to America. Since labor unions were illegal, the immigrants transformed the Ancient Order of Hibernians, which had always been a legal fraternal organization, into a secret underground cell of union organizers. Of the 35,000 coal miners in the area of Mauch Chunk, 85% were union members.

To crush any new union efforts, Gowen turned to the Pinkerton Detective Agency. In October 1873, the Pinkertons inserted a spy into the work force, named James McParland but using the alias James McKenna, to keep an eye on everyone and report back to Gowen.

Over the next four years, McParland inserted himself into the union movement and passed on information to the Pinkertons. There was, McParland reported, a secret organization amongst the miners that called itself the “Molly Maguires”, named after an armed secret society in Ireland that used murder and arson to punish British landowners who charged exorbitent rents to Irish farmers. According to McParland’s reports, the Molly Maguires in Pennsylvania were using the Ancient Order of Hibernians as a front for union organizing.

In December 1874, Gowen announced a twenty-percent pay cut for all the miners, and in desperation, the coal union went on strike the following January. In what became known as “The Long Strike”, the miners held out for almost six months. The coal companies responded with ruthless terror. Using information from McParland, local police identified the union leaders and arrested over 25 of them, charging them with illegal conspiracy. Several union supporters were found shot to death. The state militia was called in to break up workers demonstrations. By June 1875, the strike had been broken, and the starved and cowed workers returned to the mines under a pay cut.

It was in the aftermath of the failed strike, McParland reported, that the Molly Maguires really began to gain support amongst the miners. Prominent anti-union people, including company foremen, local Iron and Coal Police, and suspected informers, began turning up dead. Company installations were sabotaged or burned, including telegraph offices, railroad bridges, and mining equipment. According to McParland’s reports, it was the doing of the Mollies.

The authorities now moved in. In 1876, dozens of suspected Molly Maguires were arrested. Gowen, a former District Attorney for Schuylkill County, now had himself appointed as a Special Prosecutor and personally oversaw the trials. McParland was the star witness. One of the local judges complained about the coal company’s domination of the entire process, saying, “The Molly Maguire trials were a surrender of state sovereignty. A private corporation initiated the investigation through a private detective agency. A private police force arrested the alleged defenders, and private attorneys for the coal companies prosecuted them. The state provided only the courtroom and the gallows.”

On June 21, 1877, (now known as “The Day of the Rope”), six convicted Molly Maguires were hanged in Pottsville, PA. On the same day, four more Mollies were hanged in Mauch Chunk. One of these was Alexander Campbell. According to legend, as Campbell was taken out of his jail cell to the gallows, he rubbed his hand on the floor, slapped a muddy handprint on the wall, and declared that as proof of his innocence, the handprint would never disappear. Since then, the handprint has, according to the story, remained despite being painted and plastered over, and is still visible today in Campbell’s cell at the Old Jail Museum in Jim Thorpe, Pennsylvania (the name taken by the town of Mauch Chunk in the 1920’s). Over the next year, ten more Molly Maguires were hanged.

Today, historians are divided over the Molly Maguires. Some have concluded that the Mollies were simply a terrorist group that murdered people over personal grudges or private affairs, and used the union movement as a convenient excuse. Others praise the Maguires as one of the first labor unions in the coal fields, and condemn McParland as a liar who fingered innocent people to curry favor with his Pinkerton bosses. A number of historians point out that many of the arrested “Molly Maguires” had previously been involved with anti-draft protests during the Civil War, and wonder if some of the arrests were simply a chance to settle old scores.

In September 1978, Pennsylvania Governor Milton Shapp issued a statement granting a pardon to John “Black Jack” Kehoe, the so-called “King of the Molly Maguires” who had been hanged in 1878. Shapp concluded that the trials had been unfair, that there was no real evidence to convict anyone, and announced, “We can be proud of the men known as the Molly Maguires because they defiantly faced allegations which attempted to make trade unionism a criminal conspiracy.”

One thought on “The Molly Maguires”