In October 1962, in the midst of the Cuban Missile Crisis, World War Three was almost touched off by a marauding Black Bear in Minnesota. 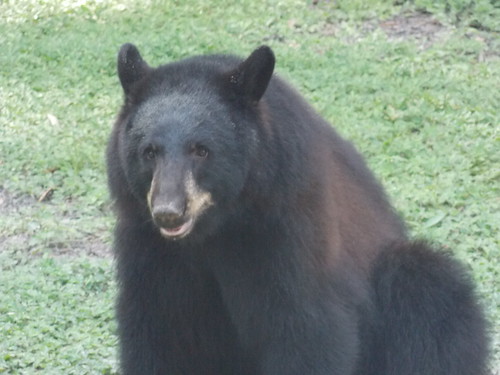 In October 1962, the United States detected a number of bases in Cuba where the Soviets were installing nuclear-armed intermediate-range missiles capable of reaching nearly all of the US. President Kennedy ordered a “quarantine” on shipping into Cuba, and as the situation became more and more tense, both sides prepared for a possible nuclear war, and both nervously watched the other intently for any signs of an impending surprise strike. On October 22, US armed forces were put on Defcon 3 (Defense Condition 3). The Cuban Missile Crisis had begun.

As part of the Defcon protocol, 161 of the Air Force’s F-106A Delta Dart interceptors were dispersed from the major air bases, where they were vulnerable to a Soviet surprise attack, to a number of smaller air bases around the country. One of these was the Volk Air National Guard base in Wisconsin. Used primarily for pilot training, the Volk Air Base was so small that it didn’t even have a control tower: flights here were directed from the Air Force Base at Duluth, Minnesota, 300 miles away. But now, to make it harder for the Russians to knock out all the American interceptors on the ground in an initial surprise attack, two squadrons of Delta Darts had been moved here from Selfridge Air Force Base in Michigan.

Their mission was to intercept any Soviet bombers approaching the US from Canada and shoot them down. Each F-106 was fitted with a live “Genie” air-to-air missile. The AIR-2A Genie had a range of about six miles, and, to make sure it destroyed its target, it carried a 1.5 kiloton nuclear warhead. Unguided, the missile was intended to be fired into the middle of a Soviet bomber formation and detonate by a timed fuze. It was capable of destroying any aircraft within a quarter-mile of the explosion

The little airfield in Wisconsin was now strewn with Genie-carrying F-106’s and pilots standing by on full alert, ready to fly at a moment’s notice. Overhead, Strategic Air Command B-47’s and B-52’s armed with hydrogen bombs circled in the sky (to prevent them from being caught on the ground by a surprise attack), ready to leave for a (probably one-way) trip to their targets in the Soviet Union if the order came. The whole base had been hastily wired up with a series of alarms and loudspeakers. This was no exercise.

The tension continued for three days, with pilots being rotated on and off alert.

Then, just before midnight on October 25, a sentry at the Air Force Command Center in Duluth was making his patrol around the perimeter when he saw a shadowy figure ahead of him in the darkness, trying to climb the outer fence into the secured area. Security personnel had already been told that, in advance of a Soviet nuclear strike, infiltrators would likely try to sabotage the American interceptors. The sentry fired a couple shots at the intruder, then hit the button triggering the “sabotage alarm”, indicating an enemy agent inside the defensive perimeter. This automatically sounded an alarm not only at the Duluth base, but at each of the dispersed airfields that were under Duluth’s control, including Volk Field in Wisconsin.

Within seconds of the alarm being triggered, the “intruder” ran off into the woods on four legs. It was a bear. The sentry immediately contacted the command center and reported the mistake, and canceled the intruder alert.

But at Volk Field, things did not go that smoothly.

In the rush to install all of the various alarms at the air field, someone had made a significant wiring mistake and had run a cable to the wrong alarm. As a result, when the signal was received from Duluth, it did not trigger the “intruder” alarm: it triggered the one alarm that nobody wanted to hear, the klaxon bell that ordered the fighter pilots to scramble to intercept incoming enemy bombers. Everyone at Volk now thought that the Cuban crisis had exploded, World War Three had begun, and Soviet bombers were approaching the US to drop their nuclear weapons. The pilots ran to their planes and began their takeoff procedures–with their nuclear-tipped Genie missiles ready for action. Had the Soviet air defenses picked up a flight of American planes crossing the border over Canada towards the USSR, it might have been enough to start the nuclear war. But the real danger was the SAC bombers in the air, on standby. The fighter squadrons had no idea where they were or how many, and could easily have mistaken an American B-47 or B-52 group for a formation of Soviet bombers, and launched their Genies at them. In the resulting confusion, with nuclear explosions occurring over the US, nobody would be sure what was happening or who was shooting at who, and that too might have been enough to start the war.

Fortunately, an officer at the Volk Base contacted Duluth by telephone to ask for confirmation of the scramble order, and was told that it was a false alarm. Because Volk had no control tower, the planes, which had already begun taxiing out to the runway, could only be prevented from taking off by driving madly out onto the runway in a jeep, emergency lights flashing, to block them. The takeoffs (and World War Three) were averted.

Remarkably, though, the saboteur bear was just one of several other incidents that happened during the Missile Crisis, any one of which could also have accidentally triggered the nuclear Armageddon…Throughout 1962, the Air Force had been conducting routine missile tests at Vandenburg Air Force Base in California and at Cape Canaveral, Florida. It so happened that test-launches of an Atlas ICBM and the new Titan II ICBM had already been scheduled at both bases on the same day–October 26, 1962, right in the middle of the Cuban crisis. Amazingly, no one thought to cancel the tests, and the Air Force techies dutifully followed their schedule. As a result, two unarmed ICBMs were actually launched from the US–one just before dawn from California into the Pacific, and the other that afternoon from Florida into the Atlantic. Either of them could have triggered an early-warning alarm in the USSR and led to war. (Since the US early-warning radars also hadn’t been informed of the test launches, one of the sites in New Jersey initially took the Florida test for a Soviet ICBM, until they were able to calculate its trajectory and launch point.)

7 thoughts on “How a Bear Almost Ended the World”