In 1960, before he even took office, President John Kennedy was the target of an odd assassination attempt that came very close to killing him. 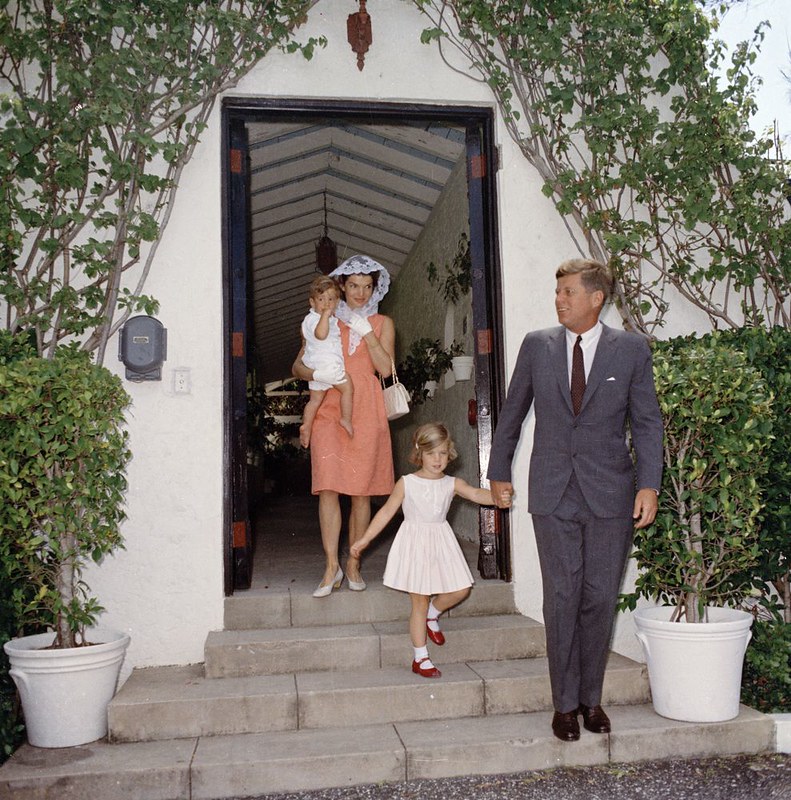 The 1960 election was one of the closest-run in US history. Much of the campaign focused on Cold War issues, especially an alleged “missile gap” with the Soviet Union. Since one of the candidates, Massachusetts Senator John F Kennedy, was a Catholic, however, the race also introduced some disturbing aspects centering around religion and the role of church and state.

The United States has always had a sizable number of Roman Catholics, including large numbers of immigrants from Ireland, Eastern Europe, and Italy. And, in turn, the United States has also always had a sizable streak of anti-Catholicism. Many rightwing extremist nationalists viewed all Catholics with suspicion, arguing that under “Popery” their loyalty was to Rome, not to the United States. The Ku Klux Klan made “Papist” Catholic immigrants a target for their terrorist violence just as they did Jews and African-Americans.

Before 1960, only one Catholic had ever been nominated to run for President—Governor Al Smith, who ran against Herbert Hoover in 1928. It provoked some of the ugliest and most bigoted political campaigning ever seen in the US. Tracts appeared asserting that Smith, if elected, would force passage of a Constitutional Amendment establishing Catholicism as the state religion. Even more idiotic allegations followed: the Vatican would dig a tunnel to the United States so they could pass orders to President Smith, and the White House would appoint an American Cardinal as a new “Secretary of Religion”. Smith suffered a crushing defeat, losing even much of the staunchly Democratic South.

And when John F Kennedy announced his bid for the Presidency in 1960, he faced similar anti-Catholic sentiments. Most of the arguments were the same that Al Smith had faced three decades ago: the US would be secretly run by the Pope who would control everything the President did, and the United States would be pushed into becoming a Catholic state. When Kennedy faced off with Senator Hubert Humphrey in the West Virginia primary (a state with only 4% Catholics), he was trailing by double digits.

Kennedy decided to face the bigotry head-on. During a meeting with the American Society of Newspaper Editors, Kennedy asked, “Are we going to admit to the world that a Jew can be elected Mayor of Dublin, a Protestant can be chosen Foreign Minister of France, a Moslem can be elected to the Israeli parliament—but a Catholic cannot be President of the United States?” He flatly stated that as President his job was to uphold the Constitution, including the separation of church and state. To not do so, Kennedy concluded, would not only be a violation of his oath of office, but a sin against God.

But after Kennedy had won the Democratic nomination and was running against the Republican Nixon, the issue boiled up again in September 1960, just before the general election. An assembly of 150 Protestant ministers in Washington DC announced that they did not believe Kennedy could be independent of the Catholic Church unless he publicly renounced his faith. In response, Kennedy gave a speech to the Greater Houston Ministerial Association. “I am not the Catholic candidate for president,” Kennedy declared. “I am the Democratic Party’s candidate for president, who happens also to be a Catholic. I do not speak for my church on public matters, and the church does not speak for me.”

Although Kennedy had hoped that his stand would clear up the “Catholicism” issue once and for all, it did not—and it would dog him for the rest of the election.

In the little town of Belmont, New Hampshire, one person in particular was vocal about his feelings. An elderly loner with no family, Richard Pavlick had retired as a Boston postmaster a few years before and moved to Belmont. Here, he became known as a local crank who would often show up at county government meetings and launch into big long ideological rants, and send rambling letters to the local newspaper complaining about everything from “communists” to “improper displays of the American flag”. At one point, Pavlick accused the local water utility of “poisoning” the town’s drinking water, went to the home of the plant supervisor, and angrily confronted him with a drawn gun. Although he was well-known to the local police, however, they considered him to be just a harmless old crackpot.

But when Senator John Kennedy announced a run for President, it really set off Richard Pavlick. His political screeds now contained passages condemning Kennedy for, as he saw it, using his father’s wealth to try to “buy the election”. He also railed against Catholics who were, he fumed, anti-American and served a foreign authority. In particular, he declared, if the Catholic Kennedy were elected, the United States would be “run by the Pope from Rome”. And in many instances, Pavlick ended his tirade with the conclusion that if Kennedy won the election, “somebody should shoot him”.

In November 1960, of course, Kennedy did win the election—and Pavlick swung into action. He went to a local hardware store and purchased ten sticks of dynamite, saying that he needed to blow up some tree stumps on his land to remove them. In those more innocent days, this was entirely legal and not particularly uncommon, and people routinely purchased things that today would get you an FBI visit.

But now Pavlick’s actions became even more abrupt. He gave away his entire house and property, donating it to the local Spaulding Youth Center, and after packing away a few things in his 1950 Buick, began living in his car and promptly left town. After a few days, several casual acquaintances in Belmont, especially postmaster Tom Murphy, began getting postcards from Pavlick.

Mostly they contained the same ideological hot air that they had always heard from him. But as more and more postcards arrived, Murphy in particular became concerned by two things he had noticed: Pavlick’s anger seemed more and more focused on President-elect Kennedy, and the postmarks indicated that each postcard had been mailed from a date and city where Kennedy had also been at the same time. Finally, in one postcard, Pavlick told him to “Watch the news, you’ll soon be hearing about me in a big way”, and Murphy, after talking it over with the town’s police chief, contacted the Secret Service.

After some local interviews, the Secret Service learned about Pavlick’s repeated extremist political threats, his sudden departure from town, his apparent stalking of the President-elect, and the fact that he had recently bought enough dynamite to level much of a city block. They passed along a description of Pavlick and his Buick to every police department in the country.

On the afternoon of December 15, 1960, a police officer in Palm Beach, Florida—a posh tropical playground for the rich and famous where the Kennedy family had a seaside estate—noticed a 1950 Buick crossing the Henry Flagler Memorial Bridge and, recognizing it as the car being sought by the Secret Service, pulled it over for “driving on the wrong side of the road”. Inside was Richard Pavlick—and ten sticks of dynamite that had been wired up to an ignition switch on the dashboard.

Under questioning, Pavlick told all. “The Kennedy money bought him the White House,” he complained to the police. “I wanted to teach the United States the presidency is not for sale.” To reporters who interviewed him in his jail cell, Pavlick declared, “I had the crazy idea I wanted to stop Kennedy from being President.”

Listening to Pavlick’s confessions, the police, the FBI and the Secret Service were stunned by just how close he had come to succeeding in his hunt. Pavlick told them how he had been able to park his explosives-laden car near the Kennedy family home in Hyannisport MA as well as other dwellings in Georgetown MD and Palm Beach, and was able to photograph the grounds and study the safety measures there. (“The security was lousy”, he bragged.) And from press reports he was able to determine the President-elect’s schedule and follow him all over the country.

Then Pavlick told the horrified Federal agents that on Sunday, December 11, just a few days before he had been arrested, he had indeed made an actual attempt on Kennedy’s life. Parked near the entrance to the family’s winter estate on North Ocean Boulevard in Palm Beach, Pavlick had waited for the President-elect to get into his limousine to go to the nearby St Edward Catholic Church for Mass. The would-be assassin intended to ram his Buick into the limo, then flip the switch that would set off the dynamite car-bomb and blow them both into oblivion. But when Kennedy emerged, just before 10am, he was accompanied by his wife Jackie and their two young children who stood next to the limousine to wave goodbye. Pavlick decided that his target was Kennedy, not the family, so he aborted the attempt and made the decision to try again later when he could get JFK alone. “I did not want to harm her or the children,” he told his questioners.

A couple days later, Pavlick visited the St Edward Church for himself to learn the layout, hoping he might be able to stage his next attempt there. He was arrested before he could try again.

Pavlick was charged with a series of both State and Federal crimes, and in January 1961 was placed in a Federal medical center in Illinois for psychiatric evaluation. By the time John F Kennedy was assassinated in Dallas in November 1963, Pavlick had still not been brought to trial. Finally, Florida prosecutors and a judge decided that he was mentally unfit for trial and unable to distinguish right from wrong, and they dropped the charges against him on December 2, 1963—ten days after Kennedy had been killed by Lee Harvey Oswald. Federal officials reached the same conclusion in August 1964. Pavlick was confined in the New Hampshire State Hospital until December 1966, when he was released at the age of 79. He then lived quietly in New Hampshire until he died in a VA Hospital in 1975, at the age of 88.
During his time as President, John F Kennedy often spent time at the Palm Beach estate, which quickly became known as “the Winter White House”. Kennedy could often be found tooling around the Intercostal in his yacht, the Honey Fitz.

Today, the St Edward Church, where Richard Pavlick had planned to make another attempt on JFK’s life, still stands in Palm Beach FL. In 1995, the Kennedy family sold the mansion on Ocean Boulevard to a banking executive, who in turn sold it in 2015 to a New York real estate heiress. It is still privately owned today. There are no markers or any other sign of the site’s historical significance.