During the height of the Battle of the Atlantic in World War 2, the British defended their vital supply convoys against German U-boats with civilian cargo ships that had been fitted with flight decks to carry military aircraft. 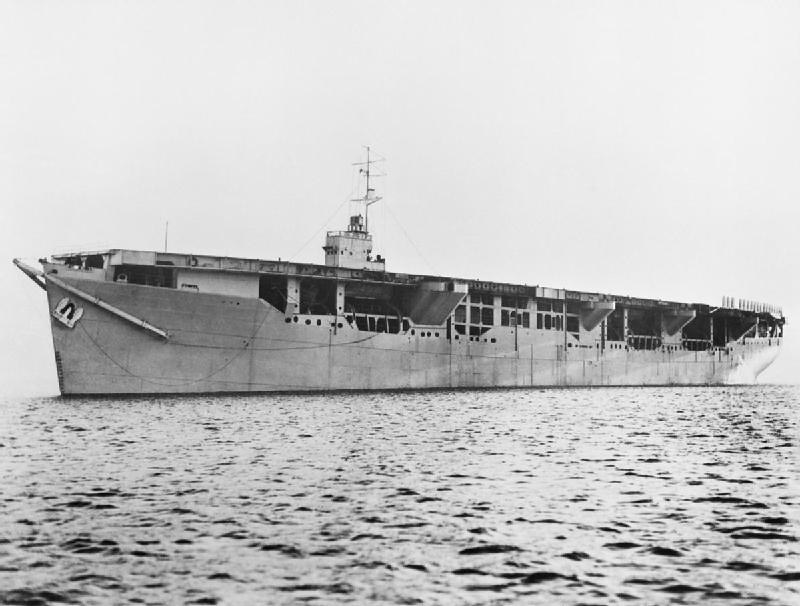 In early 1940, the Second World War was not going well for England. The Nazis had already overrun much of Europe, and would soon take France out of the war. Nazi U-boats were running rampant in the Atlantic, and were sinking British supply ships running between North America and Europe at a rate that threatened to starve the islands of supplies. While the Americans and Canadians were able to provide air cover for convoys leaving their ports and the Royal Air Force could protect the ships once they arrived in English waters, there was a huge gap in the middle of the Atlantic where land-based aircraft could not reach, leaving the convoys vulnerable to German submarines.

In desperation, the British Admiralty studied the idea of a “merchant aircraft carrier”—fitting an ordinary cargo ship with a flat flight deck which would make her capable of launching a small number of aircraft to defend the convoy. As an experiment, the captured German freighter Hannover was converted into a makeshift mini-carrier in 1941, entering service as HMS Audacity in June. But while the concept proved to be workable, with as many as 50 convoys crossing the Atlantic at any given time it quickly became obvious that the UK simply did not have sufficient resources to produce enough of these “carriers” to do the job.

Then in December 1941 the United States entered the war, and with her virtually unlimited industrial capacity, she became the answer to the problem. American shipyards began work on producing a new class of “escort carriers”—sometimes dubbed “jeep carriers”—to serve as convoy escorts. These would be much smaller than the big fleet carriers and would hold only a handful of planes, just enough to protect the convoy from submarines, surface raiders, and bombers.

But even the industrial might of the US could only move so fast, and given the other urgent priorities—not the least of which was producing the simple “Liberty” cargo ships as rapidly as possible—it soon became apparent that it would be some time before escort carriers could be put into service in large numbers. A stopgap expedient was urgently needed.

It was the British who then resurrected the idea of the “merchant aircraft carrier” or MAC. There were doubts about the sturdiness of merchant ship hulls, and it was also feared that the civilian ships were too slow and too short to safely launch modern aircraft. But as the Battle of the Atlantic worsened in 1942, desperation won out, and it was decided to modify members of two classes of merchant ship—bulk grain carriers and fuel tankers—as makeshift aircraft carriers. At around 420 feet long and a speed of 15 knots, they were (just barely) sufficient for launching the aging biplane Swordfish naval torpedo bombers.

To make the conversion process as simple and rapid as possible, only the barest minimum modifications were made. The fuel tankers had their pilothouse and funnels removed and were fitted with a flight deck that ran the length of the ship. They carried three Swordfish that were stored out on the open deck (theoretically they could carry four planes, but this became too cramped). The grain carriers carried four Swordfish, which could be stored below, with wings folded, in a cargo compartment that had been modified into a hangar. An elevator was added to carry the planes up to the flight deck. Even with all these modifications, the grain ship/aircraft carrier was still able to carry about two-thirds of her normal cargo load. The modified fuel tankers, which lacked an internal hangar, only lost about ten percent of their cargo capacity (mostly for aviation gas tanks and ordinance bunkers for the Swordfish’s depth charges, machine guns and torpedoes).

The first two MACs, converted from new bulk grain freighters that were already under construction, entered service in April 1943. In accordance with British practice, they were given names that began with “Empire” (indicating that they were under the control of the British Ministry of War Transport) and ended with another name that began with “Mac” (for Merchant Aircraft Carrier)—so they were dubbed Empire MacAlpine and Empire MacAndrew. Four more entered service over the next ten months.

The converted fuel tankers, meanwhile, were delayed as the Royal Navy raised safety concerns: fuel tankers, after all, carried huge amounts of gasoline, oil and aviation fuel and were essentially floating bombs. In the end, however, expediency won out—the fuel tankers were cheaper and faster to convert than the grain ships. By October 1943 the first fuel tanker MAC, Empire MacKay, entered service, followed over the next few weeks by three more. All of these were modified from new tanker hulls that were already under construction.

Despite this desperate effort, however, it was still not enough, and the Admiralty decided that the fastest way to obtain more MACs would be to find existing cargo ships that were of sufficient size and speed, withdraw them from convoy service, and add flight decks to them. The best available ships for the task were the “Triple Twelve” oil tankers (known as Rapana class) operated by the Anglo-Saxon Petroleum Company, a subsidiary of Dutch Royal Shell. In response, the British subsidiary offered its entire fleet of eight tankers for conversion, and its Dutch parent company offered all three of its “Triple Twelves”. In total, nine of these would be converted into MACs (they would all retain their civilian names upon entering service). Two of these, Gadila and Macoma, were operated by crews from Holland under the Dutch flag.

Legally, none of the 19 MACs that entered service were owned by the British or Dutch Navies and none were listed on the official Navy rosters—they remained registered as civilian cargo ships with merchant marine crews and officers. But the Swordfish aircraft were maintained and flown by uniformed active-duty Navy pilot officers and ground crew (who made up around half of the MAC’s complement). Since these aircraft were fully armed and had the open mission of attacking hostile submarines and ships, it was obvious that despite the legal fiction of civilian ownership these were military vessels—and this produced a legal quagmire. Under international law, non-uniformed civilians who take up weapons are not considered as “combatants” and are not accorded the legal rights and protections provided by the Conventions on the rules of war: if captured they have no rights as a POW and can be arrested and executed as ordinary criminals.

The Royal Navy at first intended to man the merchant carriers with military personnel and list the ships as official war vessels, but the harsh reality was that there simply were not enough sailors available. London therefore tried its best to hide from the Germans the fact that the MAC ships, despite looking and acting like Navy carriers, were actually civilian, and it is not even clear how aware the merchant marine crews themselves were of their precarious legal situation.

In the end, the Royal Navy considered the MACs to be a success. While none of the Swordfish aircraft operating from the civilian carriers ever sunk a German U-boat, losses from convoys that were escorted by a MAC were relatively light, and post-war accounts from German submariners indicated that they feared the little aircraft carriers and would usually withdraw if they saw one. None of the civilian MACs were lost or damaged, though the original British Navy mini-carrier, HMS Audacity, was sunk on convoy duty in 1941.

By mid-1944 the United States was finally beginning to turn out large numbers of escort carriers, and the civilian MACs became unnecessary. Four of them were withdrawn in 1944 and refitted back into civilian cargo ships. The rest were mostly used to ferry new aircraft across the Atlantic. Although some thought was given to sending the mini-carriers to the Pacific, none were ever assigned there. When the European War ended in May 1945, the remaining MACs were released from service and reconverted to merchant ships. Today, none of them survives.