After the end of the Civil War, President Andrew Johnson became embroiled in a political fight with Congress, and retained his office by grace of a single vote. 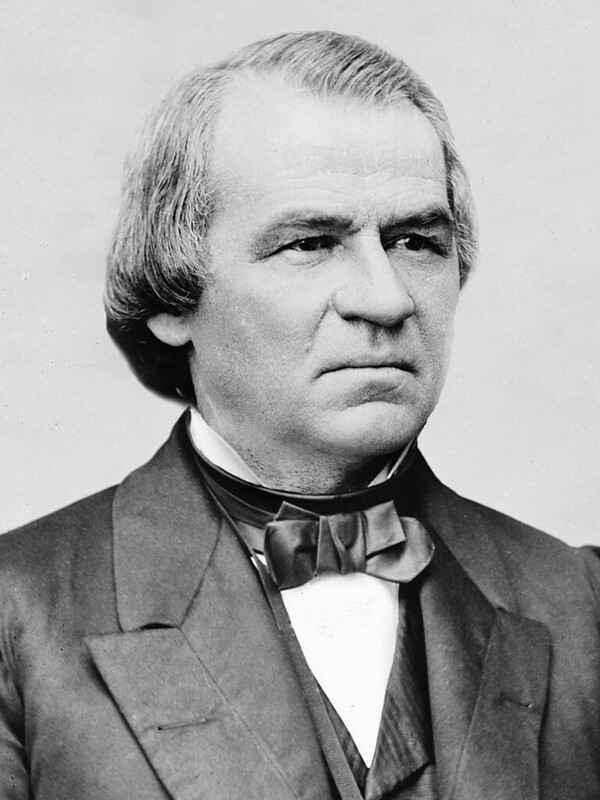 As the end of the Civil War came into view in 1864, Lincoln began preparing for the peace. Realizing that a reconciliation had to be worked out that would bring the southern states back into the Union and that old resentments could not be allowed to smolder, Lincoln proposed that the prodigal states be welcomed back and treated with respect. In his second inaugural address, Lincoln pledged to follow a policy towards the defeated Confederates of “malice toward none, charity toward all”.

At the same time, however, Lincoln recognized that the end of slavery would alter the entire social structure of the Old South. In all, some 3 million formerly enslaved people—180,000 of which had already enlisted in the Federal Army—were now to be freed. To help integrate them into their new social structures, Lincoln had Congress establish a Freedmen’s Bureau which would help the former slaves with land, funding, education, and whatever else they needed to make new lives as  free citizens.   And, in a speech  he gave on April 11, 1865, Lincoln announced that this would also include the right to vote as citizens of the US.

Unfortunately, we will never know what process Lincoln had in mind to accomplish this—he was assassinated just four days later. The task of Reconstruction fell to the Vice President, Andrew Johnson. Johnson, a Democrat, had been the only southern Senator to oppose secession, and had been appointed as the Federal military governor of Tennessee. As the 1864 elections approached, the Republican Lincoln sought to win Democratic votes by choosing Johnson as his running mate.

After the assassination, Johnson accepted Lincoln’s basic approach of reconciliation rather than iron-fisted punishment, and wanted to return the Southern states to the fold as quickly as possible. But unlike Lincoln, Johnson also continued to hold a strong belief in “states rights”, and, disregarding the fact that the United States had just fought a long and bloody war against the Southern elite to destroy slavery, Johnson now allowed the occupied states to decide for themselves what social structure they would have, and issued pardons to prominent former Confederates. Under this policy of “Presidential Reconstruction”, the former Confederates were given free reign to rule their re-admitted states as they saw fit.

The result was predictable. As Reconstruction began, the same group of interests that had always dominated Southern society—based on class aristocracy, agrarian economic structures, and, most of all, race—quickly regained control. With Johnson’s acquiescence, state legislatures passed so-called “Black Codes” which in effect forced African-Americans into second-class citizenship, restricting their rights to vote and to hold property. When Congress passed a Civil Rights Bill in 1866 which pledged the Federal Government to guarantee equal treatment under the law of all US citizens regardless of race, Johnson vetoed it—then Congress promptly overrode the veto. It was one of the first salvos in what would become a bitter political battle between Congress and the President.

Public opinion in the North was outraged. Although the war had begun with the aim of holding the Union together, it had been transformed into a crusade to abolish the institution of human slavery and to live up to the country’s pledge of “liberty and justice for all”. In the 1866 Congressional elections, a wave of abolitionists was elected, with the clear policy of providing full and equal citizenship for the newly-freed slaves—whether the South liked it or not. It became known as the “Radical Reconstruction”.

The result was political war. The former Confederates fought bitterly against what they called “carpetbaggers” (northern politicians who favored equal rights) and “scalawags” (southern politicians who supported racial equality). The abolitionist-dominated Congress passed laws requiring the Southern states to adopt the 13th, 14th and 15th Amendments—freeing all of their enslaved people and granting them full citizenship rights—as a precondition for readmission to the Union. Another law specified the structure of all the new state governments including provisions for protecting voting rights for all citizens, and divided the former Confederacy into five military zones, with the Federal Army assigned the task of enforcing those rights. Johnson vetoed all of this, and in retaliation, after overriding all his vetoes, Congress passed the “Tenure of Office Act”, forbidding the President from replacing any cabinet official without a Senate vote.The law was designed to protect several prominent Radical Reconstructionists in the cabinet, including secretary of War Edwin Stanton. Johnson in turn declared that the law unconstitutionally infringed on his executive powers, announced that he wouldn’t follow it, and defiantly tried to fire Secretary of War Stanton. Stanton responded by barricading himself in his office. Congress promptly filed articles of impeachment against Johnson over this violation of the Act.

In a straight party-line action, the House of Representatives voted to impeach on eleven counts, ranging from violating the Tenure of Office, to denying the powers of Congress. It was a pretty weak case, and everyone everywhere knew it was politically motivated.

The case went to the Senate for trial, presided over by Chief Justice Salmon Chase. Johnson didn’t even deign to show up. When the time came for a vote, it went 35-19 to convict—one vote shy of the two-thirds needed. Two more ballots gave the same result. The proceedings came to an end, and Johnson continued in office.

In 1926, in another case, the Supreme Court ruled the Tenure of Office Act to be unconstitutional.

One thought on “The Impeachment of President Andrew Johnson”