The F-22 Raptor is the latest fighter to be produced by the US. 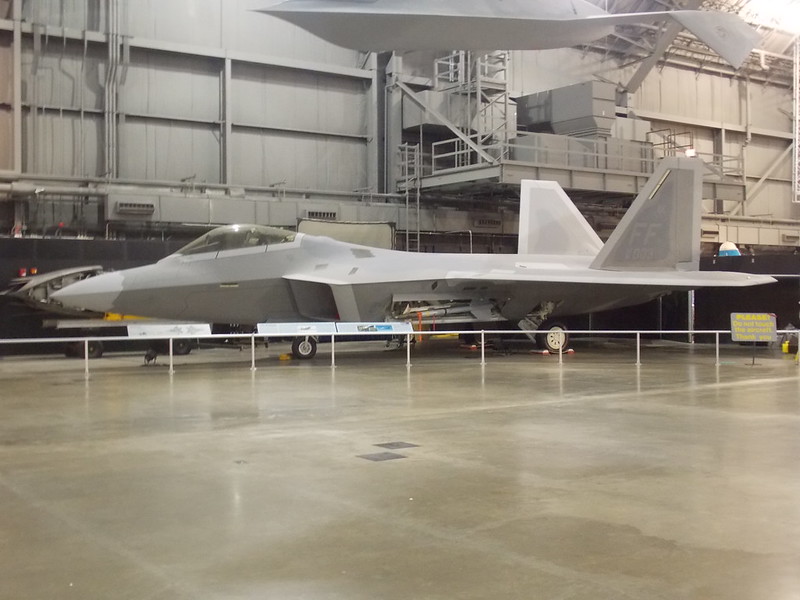 F-22 Raptor on display at the US Air Force Museum

When the United States began deploying the F-15 Eagle in the 1970s, it was assumed that the new fighter would give NATO air superiority for the foreseeable future. But the Soviet Union responded with a crash program of its own to catch up, and by 1979 the US was aware of two new Russian fighters—the MiG-29 “Fulcrum” and the Sukhoi Su-27 “Flanker”. Both of these were far advanced over previous Soviet designs and would be formidable challenges to the American fighters, and the Pentagon decided that it needed an intense effort of its own to stay ahead.

The result was the “Advanced Tactical Fighter” program, announced in 1986 to find a replacement for the F-15. With the success of the F-117 Nighthawk and B-2 Spirit stealth programs, the Air Force knew that the ATF had to incorporate the latest stealth technology. It also had to be capable of “supercruise”—reaching supersonic speeds without the use of afterburners which produced huge infrared signals and gave away the plane’s position—and it had to have a range of at least 800 miles, including 600 miles at supersonic speed (allowing it to operate from bases in England and cover all of Europe). And despite all this, the new fighter would also have to be at least as maneuverable and heavily-armed as the F-15, with the most up-to-date computerized fly-by-wire and avionics systems, and be capable of dogfighting any foreseeable Soviet threats.

At the time, only two aerospace companies, Lockheed-Martin and Northrop, had any experience designing and building stealth aircraft, and they both submitted proposals. By the 1980s, however, the cost of developing and producing modern fighter planes had climbed so high that no single aerospace company was capable of it by themselves, so the ATF project quickly divided most of the industry into two competing teams. The YF-22 Raptor was submitted by Lockheed-Martin, working with Boeing and General Dynamics, while the YF-23 Black Widow was offered by Northrop in partnership with McDonnell-Douglas. Both teams were requested to construct prototypes for testing.

The YF-23 was faster and had a smaller radar cross-section, making it more stealthy, while the YF-22 had “super-maneuverability”, using vectored thrust from the engines to perform turns tighter than any other aircraft was capable of doing. The YF-22 was also considered to be more easily adaptable to a naval version, although the Navy would later decide to stick with an upgraded version of its F-18 Hornet instead. And it probably didn’t hurt that at the time the decision was being made between the two fighter designs, Lockheed’s F-117 stealth fighter was carrying out successful strikes in Baghdad during the Persian Gulf War.

In 1991, the contract was awarded to Lockheed-Martin’s team. Combat aircraft began deployment in 2005, and production continued until 2012.

The F-22 is a single-seat fighter powered by two Pratt and Whitney F119-PW-100 engines with 26,000 pounds of thrust each. It is capable of reaching speeds of Mach 2. It is normally armed with six long-range radar-guided AIM-120 air to air missiles in the main weapons bay, and two short-range infrared AIM-9 Sidewinder missiles, one in each of the side bays. There is also a 20mm Gatling gun in the wing root. The internal weapon bays and the “clean” exterior are necessary to maintain stealth, and also reduce drag to give better speed.

Unlike the earlier F-117 and B-2, which are covered completely with Radar-Absorbing Material, the F-22 uses RAM only on the most important areas, such as leading wing edges and the front of the tail fins. The engine intakes at the front are also coated with RAM, and use a system of ducts to reduce radar echoes, eliminating the need for the baffled engine grills found on the F-117. The RAM used on the Raptor is metallic-based rather than rubbery like the F-117, and is stronger and requires less maintenance.

Inside the cockpit, the Raptor uses “integrated avionics” to feed information from various sensors to a single display which gives the pilot all the information he needs, greatly simplifying the task of both flying and fighting with the aircraft. All of this information goes into a Primary Multi-Function Display (PMFD) screen. Originally, the Air Force planned to introduce a voice-activated control system, but this proved to be a technical challenge and was dropped.

After the collapse of the Soviet Union in 1989 and the end of the Cold War, the role of air superiority became less important, and the F-22 was modified to turn it into a multi-role aircraft that was capable of air-to-ground strikes. Software and hardware upgrades gave the Raptor the ability to carry two 2000-pound guided JDAMs (Joint Direct Attack Munitions) in the internal weapons bay.

Initial plans called for a total of 750 F-22s to be produced (at a cost of $26.2 billion), but budget cuts over the years reduced this to first 648, then 339, and finally, after the collapse of the Soviet Union, to 183 (at a cost of $62 billion). There were several reasons for the cuts: the F-15, which the Raptor had been designed to replace, proved itself to not only be a very capable fighter, but could also be steadily upgraded with new avionics. The F-35 fighter had stealth like the F-22, but was specialized for the ground-attack role and, at least in the initial estimates, would be cheaper. Delays in the stealth fighter programs in China and post-Soviet Russia meant that the Raptor had no serious air-to-air rival that the existing F-15 could not handle. And unlike the F-15 and F-16, there is no export version of the F-22 available for sale to foreign allies, which places a limit on the number of aircraft that Lockheed can sell.

In the 1990s, an experimental follow-up to the F-22 was proposed called the X-44 MANTA (Multi-Axis, No-Tail Aircraft). Based on the basic Raptor design, the MANTA would have no tail fins or rudders and no ailerons on the wings, and would be controlled solely through engine thrust-vectoring. The project was cancelled in 2000. For a time, there were also plans for an FB-22, a bomber version of the Raptor with twice the range: this was cancelled in 2006. In 2014, the F-22 carried out its first combat missions, dropping precision bombs on targets in Syria; a number of aircraft have also been outfitted for surveillance and reconnaissance missions. The Raptor is expected to continue in frontline service until the 2040’s.

Today, one of the original combat prototype F-22’s, serial number 91-4003, is on display at the US Air Force Museum in Dayton OH.