One of our earliest invasive species in Florida, the wild pig was brought here by the original Spanish settlers in the first decades of the 16th century. 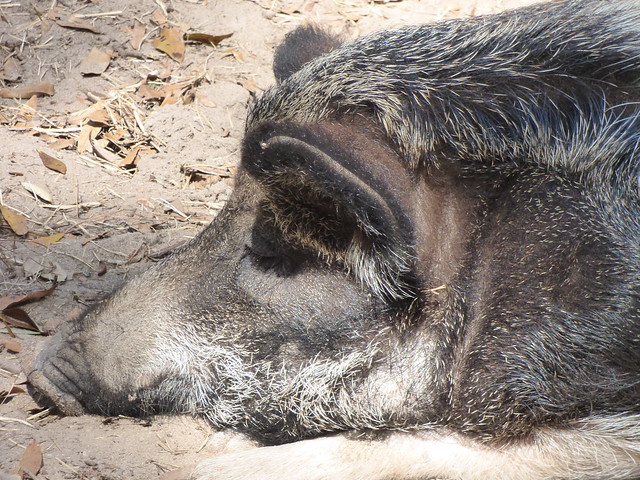 Pigs and humans have a long relationship together. First domesticated thousands of years ago, the pig has accompanied people wherever they have gone. And when Spanish settlers began arriving in the New World after 1492, they brought their pigs along with them. At the time, North America had no pigs at all: the closest thing we had was the Peccary or Javelina, which, though pig-like in appearence and behavior, actually belonged to a different family.

The Javelina lived in the southwest and was not found in Florida, so when Ponce de Leon arrived off the coast in 1521, the pigs that he carried on board his ships were a wondrous sight to the Native Americans–they had never seen such an animal before. By the time Hernan De Soto established a Spanish village near modern-day Naples in 1539, the natives were already keeping pigs as food animals, obtained through trade with sailors and pirates. As Spanish settlements grew in number, so did their pigs. Most often, the animals were left to roamaround freely, and were caught and slaughtered as needed. Inevitably, many of them wandered off into the wilderness.

For the next five centuries, natural selection took its course, as the feral pigs spread across the southeast and adapted to their new environment. Wild pigs tend to be a bit smaller than their domestic cousins, but are leaner and lots meaner. Both males (boars) and females (sows) have long sharp tusks that act as effective weapons as well as tools for rooting around in the sand for anything edible. An adult male is usually about five feet long from nose to tail, and around 200 pounds. When European wild boar were introduced to some parts of the US as a game animal in the 1800’s, they interbred freely with the local feral hogs, and while Florida never had many European boars, a number of hybrids were brought here for sport hunters. All of our wild pigs, whether feral domestic breeds or European hybrids, are considered to be the single species Sus scrofa.

Just like domestic pigs, the wild ferals are prolific breeders, producing two litters of 6 or 7 (sometimes more) piglets each year. They have few predators in Florida, though Panthers, Black Bears and Alligators are known to eat them. Today, there are somewhere around 750,000 feral hogs and hybrids running free, and Florida is exceeded only by Texas in its wild hog population. Although they are found in every Florida county, our wild hogs tend to concentrate in the central part of the state, where there are few people and lots of pine-oak forests to provide food and shelter. They also tend to congregate near water: pigs do not have many sweat glands, and their only way of keeping cool in the hot Florida sun is to wallow in mudholes. The males tend to be solitary while the females run in small family groups.

Their favorite food is acorns, but as omnivores wild hogs will feast on anything edible, including tree seedlings, small animals, and agricultural fields or gardens. In many areas they cause serious ecological damage, and wild pigs have been implicated in reducing the numbers of many threatened plant and animal species, including the Longleaf Pine and ground-nesting turtles. Many a suburban gardener has tried unsuccessfully to keep the marauders out–pigs are highly intelligent and can usually find a way through any fence. In addition, wild pigs serve as a reservoir for a number of diseases which can infect livestock.

In an effort to at least prevent the population from spreading further, the state has turned to the “eat them” strategy. Since pigs are already a familiar domestic animal, using them as a food source does not present all the problems with palatability and acceptance that other wild invaders like Lionfish or Bullfrogs do. So Florida wildlife officials heartily encourage hunters to take as many wild pigs as they can: there are no legal protections, closed seasons or bag limits. The hogs have even become a tourist attraction of sorts, with hunters coming to Florida from all over the US to stalk the wiley animals. In areas with a lot of human hunters, the Florida FWC has begun trapping pigs from other areas and relocating them where they can be shot by tourists–a win-win for everybody except the hogs. Some enterprising local restaurants and butchers have begun serving the porkers for a premium price, advertising them as “organic free-range”.

But because wild pigs are fast breeders as well as being wary, adaptable and intelligent, it is probably impossible to eradicate them completely.