In the 1940’s, a company in Ohio launched a campaign to apply Henry Ford’s automobile assembly line to houses, producing prefabricated steel homes. The Lustron house was a technological marvel, but it was way ahead of its time, and fell to political controversy and financial failure. 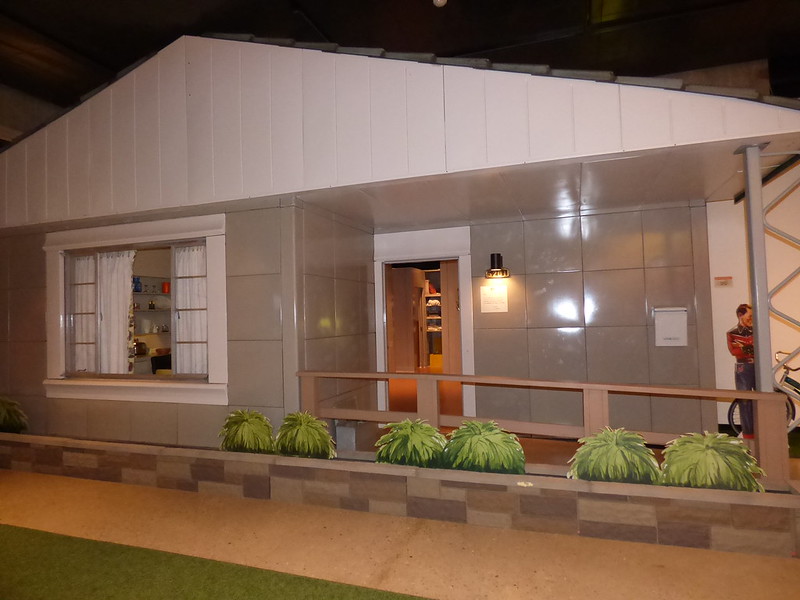 When the Second World War ended in 1945, millions of servicemen were demobilized from the military and returned home, eager to settle down in the suburbs and start families. The resulting economic boom would last for the next 30 years. But the diversion of materials and resources for the war effort meant that many consumer goods, particularly automobiles and houses, were now in short supply, and the demand from returning GIs was far bigger than could be produced.

In Chicago, businessman Carl Strandlund proposed an innovative way to help solve the shortage of housing. Strandlund developed a new design for a suburban ranch-style house that he called the Lustron. Most houses at this time were individually built with wooden frames and clapboards. They cost about $8,000. The Lustron, however, was completely different. The frame would be constructed of lightweight steel beams, and the exterior and interior walls were flat steel panels that had been coated with enamel. All of these parts would be mass-produced in the factory and shipped to the building site, where they were assembled to a standard plan on a concrete slab that served as a foundation. When finished, the Lustron had two bedrooms and one bath, with built-in storage areas, kitchen cabinets, bookshelves, molded-in sinks and bathtub, and an optional clothes-washing machine that doubled as a dishwasher. And best of all, Strandlund declared, the complete package would cost only $7,000. It would revolutionize the housing industry.

The Truman Administration was eager to help the returning GIs with their new lives, and saw the Lustron as a welcome innovation. Using Depression-era funding programs, the US Government provided Strandlund with $15 million in guaranteed loans, and leased him a surplus Curtiss aircraft factory outside Columbus OH as a manufacturing site. Strandlund announced that he would turn Columbus into the “Detroit of housing”.

The Lustron factory, measuring a million square feet in area, was a marvel of engineering. The assembly line was eight miles long, coiled within the huge plant. Strandlund used a form of “just-in-time” in which materials arrived as they were needed, reducing the need for warehouse space to store supplies. Coils of flat steel ribbon entered at one end. These were cut and stamped into shape, then coated with enamel and baked. The enamel protected the steel from rust or corrosion from salt and sun, and made the new house insect-proof, fire-proof, durable and low-maintenance. The Lustron came in a choice of colors including light blue, yellow, grey, and tan. The factory was planned with a normal output of 100 houses per day.

By 1948, there were some 140 authorized Lustron dealers around the country, with three standardized models, ranging from 700 to 1,000 square feet, on offer. Your new home arrived on a truck as eight tons of prefab steel parts and a 200-page assembly manual. It took about 300 man-hours to bolt the whole thing together. If you were adventurous, you could do it yourself: nearly everyone however hired a construction contractor to do the job. One of the first customers was the US Government, which wanted to use the prefab houses on its military bases.

But, sadly, the Lustron company ran into difficulties almost immediately. The manufacturing process turned out to be much more difficult and complex than expected. Strandlund’s original $15 million in funding ran out before he had built a single home, and he had to approach the Federal Reconstruction Finance Corporation for an additional $12 million. The added expenses pushed the finished price per Lustron to $10,000, making it an expensive option–and the high cost of shipping the prefab kits across the country meant that few sales were made outside of the local Midwest area. In many cities, the all-steel structures also ran into difficulties with the local building codes. The washing machines that came with the house proved to be unreliable, and the heating system didn’t work very well, leaving cold metal floors in the winter. Finally, local banks distrusted the durability of newfangled steel houses and were reluctant to give mortgages for them, forcing the Lustron Company to form its own finance branch.

By 1950, only 2500 Lustrons had been produced, and Strandlund found himself unable to make the payments on his Federally-guaranteed loans. Political critics, who had always opposed the idea of the government helping to support and finance the company and “taking over” a private industry, pounced. Congressional hearings were held, and the Reconstruction Finance Corporation foreclosed on its loans. The Lustron company came to an abrupt end.

Today, about 2,000 of the Lustron houses sold from 1948-1950 still exist, though most of them have been modernized with drywall interiors. As their maker envisioned, they have proven to be durable, well-designed, and virtually maintenance-free. They were far ahead of their time.

One of the original Lustron homes, sold in Alexandria VA, is now on display at the Ohio History Museum in Columbus.

2 thoughts on “The Lustron Home”