One of the oddest political events in American history happened in 1933, just after President Franklin Delano Roosevelt took office. Retired US Marine General Smedley Butler, who had led American troops during interventions from China to Nicaragua (and had twice won the Medal of Honor), testified to Congress that he had been approached by a conspiracy of corporate businessmen and Wall Street bankers to depose FDR and establish a Fascist regime in the United States, based on the political and economic programs of Hitler and Mussolini. Butler’s story became known as the “Business Plot”, and it still divides historians today. 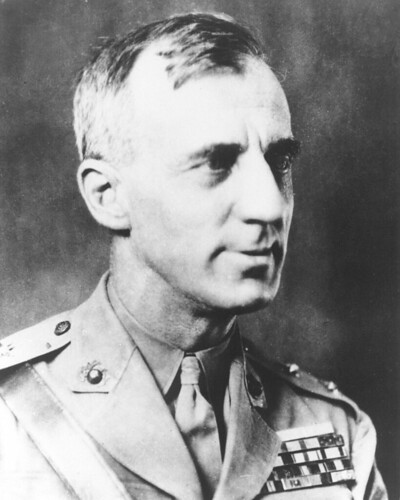 The world in 1933 was a polarized place. The immense slaughter that had taken place in the trenches of the First World War, and the economic chaos that had followed it, led, especially in Europe, to the formation of two large and powerful political movements, each at opposite ends of the spectrum and implacably opposed to each other. On the Left, the Communists sought to break the political power of the wealthy industrialist bankers, and wanted a socialist state that would massively redistribute wealth downwards. On the Right, the Fascist/Nazi movement sought an authoritarian government that would unify industrial, political and military power into a nationalist state with the goal of expansion and aggrandizement. In the eyes of both extremes, the pre-war democratic republics and economies had failed, and needed to be replaced. “Revolution” was openly planned by both groups, and was openly supported by large parts of the population. Both movements formed armed paramilitary groups and militias, which often clashed in the streets, resulting in deaths. In the end, the right wing won. Mussolini’s Fascists and Hitler’s Nazis took power and viciously suppressed the Communists and anything that the right-wing associated with them, including democracy itself. The era of the Dictator had begun.

In the United States after the 1929 stock market crash, the same fight was being waged. As the Great Depression crushed millions into hopeless poverty, the American Communist Party, which had grown out of the labor union movement, became convinced that capitalism itself was collapsing, and that now was the time for a socialist transformation. By 1933 the Communist Party had widespread support, not just within the labor movement, but also among idealists and intellectuals within the elite of American society. And in response appeared the American right wing, in the form of the German-American Bund and the Silver Shirts, which were modeled on the Italian Fascists and German Nazis. At this time, the horrors of World War Two and the concentration camps had not yet happened, and the Fascist/Nazi parties were still viewed by many in the US as legitimate political groups who offered solutions to the economic and political troubles caused by, as they saw it, the failure of democracy. A large number of leading American industrialists, religious leaders and militarists, like their counterparts in Europe, openly admired and supported Hitler and Mussolini for their staunch anti-Communist stances and their demonstrated ability to stabilize the economy, eliminate dissension and impose social order, and make the trains run on time. Many American businessmen had financial ties to German and Italian companies, as well as to French and British industrialists who were sympathetic to the Fascists.

The election of Franklin D Roosevelt in 1932 brought the political conflict between Left and Right to a head. Although FDR was a patrician blue-blood from a wealthy society family, he was advocating a program of massive government intervention in the economy to end the Depression and, as he saw it, to protect democracy from dictatorships of both the Left and the Right. To the Communists, Roosevelt was stealing part of their own program and using it to prop up and save the tottering capitalist system. To the Fascists, Roosevelt was practically a Communist himself, and was using the government to push capitalism into the grave and impose socialism.

Once in office, Roosevelt acted quickly–he announced an ambitious program of “The First One Hundred Days”, during which he introduced a series of far-reaching legislative bills that would form massive new government agencies to provide jobs to the unemployed, regulate and control the banking and finance system, and legitimize the labor unions and provide legal protections for minimum wages and safe working conditions. When the Supreme Court ruled some of these actions unconstitutional, Roosevelt responded by threatening to pack the Court with his own supporters, whereupon the Justices relented. The “New Deal” brought hysterical howls of protest from conservatives. “This is despotism, this is tyranny, this is the annihilation of liberty,” thundered West Virginia Senator Henry Hatfield. “The President has not merely signed the death warrant of capitalism, but has ordained the mutilation of the Constitution, unless the friends of liberty, regardless of party, band themselves together to regain their lost freedom.”

It was during this time that the “Business Plot” began to take shape.

In the first week of July 1933, General Smedley Butler was approached by Gerald MacGuire, a banker with the Wall Street investment firm Grayson Murphy Company and also a member of the Connecticut chapter of the American Legion, a military veterans organization that embraced right-wing politics. With MacGuire was William Doyle, the Commander of the Massachussetts American Legion. As Butler later told it, they asked him to consider running for the position of National Commander of the American Legion. As a Marine Corps General who had been very popular with the troops and often spoke to veterans groups, they told him, he could easily win. In 1932, the “Bonus Army”, consisting of tens of thousands of World War One veterans, had camped out in Washington DC to demand the monetary bonus that had been promised to them by Congress, but had been forcibly dispersed by military troops. Butler had publicly defended the marchers, which earned him respect from the veterans. Butler was also popular with the Left for his pacifist anti-war views, adopted as a result of his experiences commanding US interventions  (he had written a book titled War Is a Racket, in which he argued that the military was just a pawn used by the government to protect wealthy corporate interests around the world).

In a series of meetings that lasted through August 1934, MacGuire laid out his real agenda. He represented, he told Butler, a large group of American bankers and politicians who had decided that FDR’s communistic policies would destroy the country and that they had to act to stop him. Were Butler to become head of the American Legion, MacGuire noted, he would be in a position to command the loyalty of over half a million trained veteran soldiers. With that force behind him, and backed by a number of wealthy Americans who were willing to put up as much as $300 million of their own money, Butler could take over the reins of power. According to the plan, the US Government was to be quietly approached by intermediaries from industrial and military leaders, and given an ultimatum: President Roosevelt was to announce that, due to increasing health problems from his polio, he was physically incapable of carrying out all of the work required of him as President, and was therefore appointing an assistant, in the newly-created cabinet position of “Secretary of General Affairs”, to help him. In reality, the unelected “Secretary of General Affairs” (which Smedley apparently was led to believe would be himself) would be the actual ruler of the country, exercising total power in the name of the figurehead President and with the backing of US industrialists. The US would, in effect, undergo a Fascist takeover. If the Roosevelt Administration refused to accept this coup, General Butler was to lead the troops from the American Legion, joined by rebellious US Army units, to march on Washington, topple the government, and sieze power for the plotters.

When Butler learned of the full plot, he went to the McCormack-Dickstein Committee of the US House of Representatives, which had the responsibility of monitoring “subversive elements” within the US (and which would later be re-named and become notorious as the House Un-American Activities Committee, or HUAC). In November, Smedley testified to a closed meeting of the Committee and told all. In his testimony, Smedley listed a number of names of prominent Americans who, he had been told by MacGuire, were part of the Fascist coup conspiracy. The Committee also heard from MacGuire himself, who of course denied everything.

When the Committee issued its report in February 1935, it concluded that it considered Smedley’s story “credible”, and that Smedley’s testimony indicated “that certain persons had made an attempt to establish a fascist organization in this country. No evidence was presented and this committee had none to show a connection between this effort and any fascist activity of any European country. There is no question that these attempts were discussed, were planned, and might have been placed in execution when and if the financial backers deemed it expedient.” But the committee also noted that it could find no evidence connecting any of the American businessmen and politicians named by Smedley as part of the conspiracy, and it declined to publish their names or call them as witnesses based on “hearsay”, concluding, “This committee is not concerned with premature newspaper accounts especially when given and published prior to the taking of the testimony.” Many of the names had already been published, however, by a reporter for a Communist Party magazine. They included Grayson Murphy (the Director of Bethlehem Steel and Goodyear and an  officer for JP Morgan banks), Irenee DuPont (from the DuPont chemical company), Robert Clark (from the Singer Sewing Machine Company), John Raskob (of the DuPont Company), John Davis (a former presidential candidate and lawyer for JP Morgan Bank), and Al Smith (former Governor of New York and FDR’s political rival). Guns for the march on Washington would be made available, if necessary, by the Remington Company. Later stories would also link Senator Prescott Bush (ancestor of two Presidents), who had business ties to Nazi industrialists, to the plot.

Press and politicians from both parties, for the most part, scoffed. Smedley’s story was dismissed as a “hoax”, “a laugh story”, and “moonshine”, and the alleged conspiracy as, at best, nothing but a “cocktail putsch” and “blowhard talk”.

Since then, historians have been divided over whether the Business Plot actually existed. Most of the extreme political Left accepts it as a matter of faith, citing it even today to illustrate the evils of Wall Street (or the Bush family). Some of the extreme Right also accepts it–holding it out as an example of a lost opportunity to save the US from “Communism”. The only actual evidence for the Business Plot, however, is Smedley’s testimony–nothing solid has ever turned up linking the people named by him, or anyone else for that matter, to the alleged plan. It’s not even clear why any Fascist plotters would try to involve Smedley, who was after all a Roosevelt supporter with widely-known anti-militarist feelings. Even if his testimony is accurate, Smedley never talked to any of the other alleged co-conspirators, and only took MacGuire’s word for it that they were actually involved or that the presumed conspiracy actually existed. There is in fact no hard evidence that any “plot” went anywhere beyond MacGuire’s conversations with Smedley. Several of the people named as conspirators are indeed known to have had ideological sympathy for Hitler and Mussolini, but that was not an uncommon position at the time: among the other prominent Americans who expressed support for Fascism were Henry Ford, Joseph Kennedy, and Charles Lindbergh. And even if there actually was a serious Wall Street plan to overthrow the Roosevelt Administration, it is unlikely that such a scheme would have been in any way successful.