With the exception of the US Navy “Flight 19”, the most famous victim of the “Bermuda Triangle” was the USS Cyclops, a Navy coal-carrier with a crew of over 300, who vanished without a trace in the closing days of World War One. 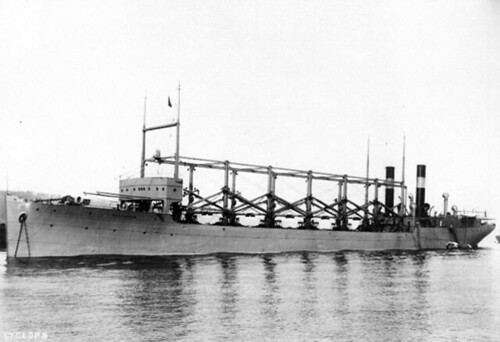 After the Spanish-American War in 1898, the US found herself in possession of colonial islands scattered across the Caribbean Sea and Pacific Ocean, from Puerto Rico to the Philippines, and decided she needed a greatly expanded and modernized navy to protect it. As a result, a series of modern battleships were constructed which became known as “The Great White Fleet”.

At this time, world navies had not yet made the transition from coal-powered ships to oil-fueled, and as part of its naval buildup, the US ordered twelve new colliers to carry coal to its far-flung naval bases around the world. One of these was the USS Cyclops, commissioned in 1917. When the US entered World War One in May 1917, the Cyclops was assigned to carry coal to Brazil to refuel British ships stationed there on anti-submarine duty.

On January 8, 1918, the Cyclops left Norfolk VA for what would be her last voyage. Arriving in Rio de Janeiro with a load of coal, the Cyclops spent two weeks being loaded with 11,000 tons of manganese ore. Although the manganese was critical for US war production, the crew of theCyclops had never carried ore before, and were inexperienced in handling it. Port officials at Rio later reported that the ship had been overloaded, with the heavy manganese pulling her hull beyond the normal waterline mark. Furthermore, the Cyclops had cracked the cylinder head in her starboard engine, reducing her to one engine only and dropping her speed to just 10 knots. Her Captain, John Worley, went first to the nearby port of Bahia and then set out on February 22 for a direct trip to Baltimore Harbor in the Chesapeake Bay, intending to have the engine repaired when he got there.

Instead, the Cyclops made an unscheduled side trip to Barbados, arriving on March 3. While there, Captain Worley visited the US Embassy and talked with American Ambassador Brockholst Livingston, and apparently took on some additional coal and a supply of water. Perhaps he had attempted to find someone to fix the broken engine. In any case, the Cyclops left Barbados on March 4, heavily overloaded and limping along at ten knots on just one engine.

She was never seen again.

When she was reported overdue at Baltimore, the Navy undertook a search along the entire east coast, but could find no trace of the ship or her crew of 309 people. It remains the largest non-combat loss of life in US Navy history.

In the aftermath of the disappearance, the Navy considered several theories. The immediate assumption was that the Cyclops had simply been ambushed by a German U-boat and torpedoed. But after the war ended in November 1918, German records showed no U-boats operating in that area. Another theory centered around the ship’s captain. Worley had been born in Germany under the name Johan Frederick Wichmann–he had entered the US illegally by jumping off a German freighter in San Francisco harbor in 1878. Ambassador Livingston reported from Barbados that Worsley was not liked by his officers, and that the ship’s crew had lots of “Germanic names”. In the anti-German hysteria of the time, it did not seem impossible that the former German Captain and/or his crew had mutinied and deliberately taken over the ship and turned it over to the German Navy. But again, post-war records showed no such incident.

Another theory centered around the ship’s cargo. Manganese ore is highly reactive, and it was speculated that, through some accident or error, the manganese had produced a fire that engulfed the ship and destroyed it. More simply, the ore itself may have been misloaded by the inexperienced crew and shifted during the trip, causing the ship to unexpectedly roll over and capsize.

The final theory was that the Cyclops had reached as far as the coast of Virginia when a series of severe storms moved in on March 9 and 10, and the ship was lost in the rough seas (particularly if the cargo had been improperly secured). This theory was reinforced when crew members of the freighter SS Amolco reported passing a ship off the coast of Virginia on March 9 that may have been the Cyclops (though the Amolco’s captain stated that he did not see such a ship).

In 1968, US Navy diver Dean Hawes was searching an area of the Atlantic about 40 nautical miles northeast of Cape Charles at the mouth of Chesapeake Bay. The salvage ship was part of the Navy search for the missing nuclear submarine USS Scorpion (which was found a few weeks later sunken near the Azores). During his dive, Hawes reported seeing a shipwreck on the bottom at a depth of about 180 feet, with a design that was not familiar to him–an odd flat superstructure held up by iron beams and with lots of cargo arms. When he later saw a photo of the USS Cyclops in a magazine article, he recognized the collier’s design as the ship he had seen on the bottom, and convinced the Navy to send a salvage team to the spot to look for it. They were unable to locate any similar-looking wreck. But the most likely explanation for the disappearance of the Cyclops remains that she was hit by the storms off the coast of Virginia with one engine out and her maneuverability crippled, was pushed by the waves past the entrance to Chesapeake Bay, and, unable to reach port, was sunk by the rough weather–perhaps because her cargo suddenly shifted.

Despite the large loss of life, though, the USS Cyclops would probably have been utterly forgotten were it not for a best-selling book published in 1974 by Charles Berlitz. Berlitz declared that there was a large area of the Atlantic and Caribbean, from Bermuda up to Norfolk and over to the Azores, where a large number of ships and airplanes had suddenly and mysteriously vanished, without a trace and without explanation. He dubbed it “The Bermuda Triangle”. And one of Berlitz’s most detailed examples was the 1918 disappearance of the USS Cyclops. In sailing from Brazil to Barbados and then to Baltimore, the Navy collier had sailed right through the very heart of the Triangle.

Since then, others have taken up the story, and the Bermuda Triangle (also known as the “Devil’s Triangle” and the “Lost Sea”) has become the favorite subject for crackpots of every sort. Among the “theories” that have been put forth to “explain” the mysterious disappearances are time-travel portals, electromagnetic fogs, methane bubbles from the sea floor, magnetic compass anomalies, flying saucers, and the Lost Continent of Atlantis.

Alas, the real explanation is far less exciting. The Caribbean is one of the most heavily-traveled areas in the world, by air and by sea, and although there are indeed lots of accidents and disappearances there, they do not occur at any higher rate in the “Triangle” than in any other equally heavily-traveled area. The weather there is variable and often dangerous, and it is no coincidence that most of the boat and aircraft accidents that happen in the area are weather-related. There is no reason to presume that the “unexplained” disappearances are any different.

The USS Cyclops had three sister ships when she was constructed. Two of these were the USSProteus and the USS Nereus. These ships survived the First World War, were sold by the Navy and served as civilian merchant ships, and were both reported missing while crossing the Atlantic in separate trips during World War Two, assumed to have been sunk by U-boats. The fourth collier of the group, USS Jupiter, was converted in 1920 into the US Navy’s first aircraft carrier, and was renamed the USS Langley. She was later converted into a seaplane tender, and was finally sunk by Japanese aircraft in the Battle of the Java Sea in 1942.