In the first years of the 19th century, Shaka Zulu created a nation that would challenge the British Empire for domination of Southern Africa. 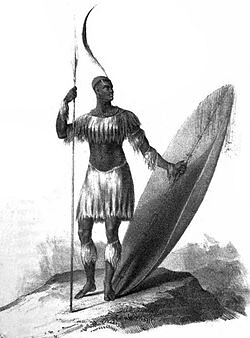 When Shaka Zulu was born, around the year 1787, Senzangakhona was the nominal chief of the Zulu, a small band of about 1500 members. The Zulu were part of the Nguni confederation of Bantu-speaking people, including the Xhosa, Matabele, and Swazi tribes, who originated in central Africa and had been steadily moving southwards for centuries. They had only recently entered what is now South Africa.

Senzangakhona had a dalliance with a woman named Nandi, who was a daughter of the chief of a neighboring tribe, the Elangeni. When she became pregnant, Senzangakhona at first denied the child, then contemptuously named the infant Shaka (“Beetle”). He reluctantly accepted Nandi and Shaka into his royal household, but when the boy was six years old they were expelled (reportedly because Shaka had allowed a dog to kill one of the king’s sheep). Nandi and Shaka were sent back to his mother’s Elangeni tribe, where they were ostracized and soon left, wandering from tribe to tribe before settling with the Mthethwe, who were ruled by chief Dingiswayo.

Dingiswayo had territorial ambitions and had already conquered a number of neighboring tribes. As a warrior in the Mthethwe, Shaka distinguished himself by his bravery, at one time single-handedly killing a leopard that was attacking one of the cows. When Shaka was given command of a 100-man unit of Dingiswayo’s army at age 21, he rebuilt it according to his own ideas of how warfare should be done.

Until this time, South African tribal warfare consisted of both armies lining up about 60 yards apart and lobbing assegai (light throwing spears) at each other until one side had enough and ran away. To Shaka, this only allowed the opponent to pick up your thrown assegai and throw it back at you. Shaka decided that a stabbing spear was better than a throwing spear, and, on his own, he designed a new weapon for the troops under his command. This was a short heavy spear with a long blade, which he called iklwa (reportedly named after the sound it made when it was pulled out of a human body). He trained his troops to fight by rushing onto the enemy at close quarters, using their oxhide shield to sweep the opponent’s shield aside, then stabbing upwards into the stomach with the short iklwa. During the campaign to conquer the Buthelezi tribe, Shaka performed so well that he was made a regimental commander, and after the defeat of the powerful Ndwandwe tribe, Shaka was made commander in chief of Dingiswayo’s army.

At around this time, Dingiswayo made an agreement with the neighboring Zulu tribe, still ruled by Senzangakhona, that Shaka would take over leadership of the Zulus when the chief died. Instead, when Senzangakhona died in 1816, another of his sons took the throne. He was soon assassinated (reportedly on Shaka’s orders) and Shaka Zulu, acompanied by his mother Nandi, now took the throne.

Though nominally under the rule of Dingiswayo and the Mthethwe, Shaka now asserted his own independent authority, and began his own campaign of conquest and consolidation. Every adult male was trained to use the iklwa, and the Zulu became a military society with a small but superbly-trained army of 500 warriors. Shaka’s first target was the Elangeni tribe that had rejected him and his mother when he was young: they were invaded and conquered, and those who had belittled Shaka and Nandi were executed. Another of Shaka’s targets was the Buthelezi: after a fierce campaign, the Zulus ruthlessly slaughtered not only the Buthelezi warriors, but also the women and children as an example.

In 1818, while fighting the Ndwandwe, Chief Dingiswayo was captured and killed, and Shaka marched his Zulu army in to take control of the Mthethwe, doubling the size of his empire. The Zulu now had an army of over 5,000 warriors. When the Ndwandwe moved on to the Zulu border with an army three times as big, Shaka defeated them at the Umfolozi River and the next year invaded and conquered the Ndwandwe homeland. Shaka and the Zulu Empire was now the undisputed master of the entire Natal area of South Africa, with 250,000 inhabitants and an army of over 50,000 warriors.

In 1825, the British Empire, which had established a colony in the southern tip of Africa, had reached Zulu territory. Shaka treated them as guests, but also took care to impress them with his power. The British negotiated a treaty giving themselves control of Port Natal, but they made no attempt to move inland.

In 1827, Shaka’s mother Nandi died, and the grief apparently drove the Zulu chief to insanity. Shaka gave orders that the entire nation should mourn: no crops could be planted, no milk could be consumed, every cow with a calf was killed (reportedly Shaka explained that even the cows should know what it is like to lose a mother), and women were forbidden to become pregnant on penalty of death. Fearing a plot against him, Shaka also had dozens of his own relatives and associates killed. Shaka’s support fell away, and in September 1827 his two half-brothers, Mhlangana and Dingane, stabbed Shaka to death with iklwas. Dingane took over as chief.