A Canadian tale of kids, candy bars, and communists……. 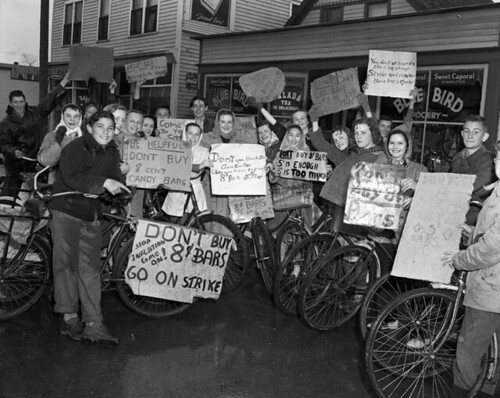 During the Second World War, the nation of Canada, like the rest of the British  Dominion, devoted most of its economy to the war effort. As production of consumer goods fell, more and more workers crowded into war industries–a perfect recipe for rampant inflation. To prevent this, the Canadian Government imposed strict price and wage controls.

At the end of the war, however, these wage/price freezes were lifted, and all that pent-up economic demand burst out. Inflation skyrocketed, purchasing power plummeted, and in a desperate effort to keep up, Canadian union workers went on strike virtually across the country.

In April 1947, a group of youngsters went into the Wigwam Cafe in the town of Ladysmith, on Vancouver Island, and were shocked to find that the price of the candy bars they wanted had jumped from 5 cents a bar to 8 cents, a 60 percent increase literally overnight.

It was more than they could tolerate, and, being the children of unionized lumber workers, they knew just what to do about it: they organized a strike.  Within hours, the kids had gathered in front of the Wigwam Cafe with homemade signs that read “Don’t buy 8 cent bars”, “Don’t be a sucker”, and “Lower prices to 5 cents”. One 16 year old neighborhood boy lent his car to the effort, and groups of protesters rode up and down the street waving placards and encouraging other kids to not buy chocolate bars, and buy ice cream cones (which remained five cents) instead.

A reporter for the Vancouver Sun stopped by to interview the pint-sized protesters. The “Candy Bar Strike” symbolized in microcosm the problems that were affecting every worker in Canada, and the story quickly flew across the entire country–and sparked similar protests. Candy stores all across Canada were picketed. In Fredericton, local kids pooled their money (and ration cards–sugar was still rationed) and made their own fudge to encourage the boycott. In Burnaby, a protest parade of kids on bicycles shut down the main street in town for two hours. In Victoria, over 200 kids stormed into the provincial capitol building to demand a price rollback, forcing the provincial legislature to close down for the day. In Ottawa, another group, led by buglers, marched on the national legislature. Three high schools in Toronto were met with student strikes. There were marches in Montreal, Calgary, Winnipeg and Quebec City. Placards read “We’ll eat worms before we eat eight-cent chocolate” and “What this country needs is a good five-cent bar”. The strikers sang a homemade protest song for the occasion:

The strike had massive public support. Labor unions endorsed and supported it; provincial youth organizations such as the Sat-Teen club encouraged their members to join the boycott. Local print shops donated signs and banners. A nationwide protest, endorsed and set up by a variety of organizations, was scheduled to take place in Toronto in May.

Then on May 3, the Toronto Evening Telegram ran an editorial under the headline “Communists Run Candy Bar Strike, Recruit Young Children For Parade,” screaming that one of the organizations endorsing the candy bar protest was the National Federation of Labor Youth, a labor union group that was funded by the Canadian Communist Party. The candy bar strike, the paper thundered, was a Communist plot: “Communist youth organizers have been instructed to use every possible means of developing and encouraging the chocolate bar agitation…. Chocolate bars and a world revolution may seem poles apart, but to the devious, Communist mind, there is a close relationship. They don’t realize it, but the indignant students parading with their placards demanding a 5 cent candy bar have become another instrument in the Communist grand strategy of the creation of chaos.”

The idea of a children’s protest against high candy prices being directed by the Kremlin as an instrument of world communist domination may seem laughably silly to us now, but in 1947 Canada, embroiled in the same McCarthyite anti-Soviet hysteria that gripped the United States, the accusation of “communist!”, whether true or not, was enough to get one blacklisted from one’s job, ostracized by the neighbors, and investigated by the government. Almost overnight, the strike collapsed as one organization after another, under pressure from police, clergy, and local governments, withdrew their support and asked their members not to cooperate with the “red” protests.

Within days, the movement had melted away, eight-cent chocolate bars became a fact of life, and the kids had learned a cold hard lesson about how the world really works.