It was the second-largest of the death camps built by the Nazis: only Auschwitz killed more people. It was the scene of an armed prisoner uprising and a mass escape. The Nazis destroyed the camp and tried to hide it before the end of the war. And even today, Treblinka is mostly forgotten, hidden in the historical shadow of the much more famous Auschwitz camp. 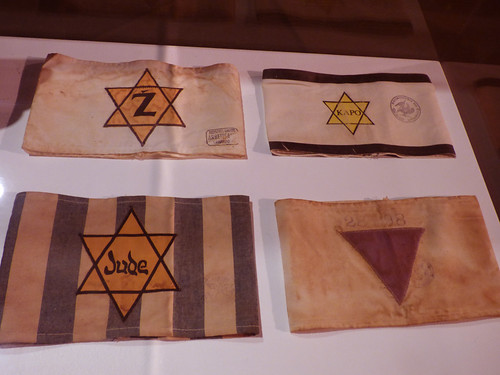 In November 1941, some two years after invading and occupying Poland, the Nazi regime constructed a labor camp near the little railroad junction of Treblinka, 50 miles northeast of Warsaw. Polish prisoners from other camps and Jews from the Warsaw Ghetto who had become “discipline problems” were sent here, to work in a nearby gravel pit.

In January 1942, sixteen Nazi government officials, including representatives from the foreign office, the civilian police, the SS, the Justice Department, and the various German state governments, met in Berlin at the request of Reinhard Heydrich, second-in-command of the SS under Heinrich Himmler. The purpose of the “Wannsee Conference” was to map out a detailed plan for what was euphemistically called “The Final Solution to the Jewish Question”. During the meeting, Heydrich produced documents showing that there were about 11 million Jews then living in Europe–about half of them in territory that was under German control. German SS units in occupied Russia and Poland were already carrying out “Special Actions”, in which large numbers of local Jews were being machine-gunned and the bodies buried in pits. But now the remaining Jews in Europe were to be killed on an industrial scale. They were, Heydrich announced, to be deported to special camps in eastern Europe and “liquidated”. Three extermination camps were to be built for the task of murdering the Jews in Poland–at Belzec (which was already under construction), Sobibor, and Treblinka. (After Heydrich was assassinated by resistance fighters in Prague on May 2, 1942, the extermination of the Polish Jews was renamed “Operation Reinhard”.)

Rather than expand the existing labor camp at Treblinka, it was decided to build a new camp next to it, about a mile away, to be known as Treblinka II. Construction began in April 1942, after the camps at Sobibor and Belzec were already completed and had started operating. Treblinka was to incorporate all the lessons learned from the other two camps. At Belzec and Sobibor, everything was arranged to give the prisoners the impression that they had arrived at just another work camp. From the trains, they were taken to a sealed room for a “shower”. Once inside, an ordinary diesel truck engine was started and its exhaust was fed inside the gas chamber. Once the prisoners were dead, they were taken out and buried in mass graves.

The death camp at Treblinka II used the same process, but it was built on a larger scale. The entire camp measured about 2,000 by 1,300 feet. The first Commandant was SS 2nd Lieutenant Dr. Irmfried Eberl, who fell behind schedule and was replaced after just two months by SS Captain Franz Stangl. Stangl commanded the camp for a year before being replaced by SS 2nd Lieutenant Kurt Franz, who ran Treblinka II until it ceased operations in November 1943. The camp had a staff of about 30 SS officers and between 100 and 120 guards, who were recruited from Ukrainian POWs as volunteers.

There were three gas chambers, each measuring 12 by 12 feet and with its own diesel Panzer tank engine outside that fed carbon monoxide into the room. The prisoners arrived at the camp’s train platform in freight cars and were herded along a pathway (the guards called it “The Road to Heaven”) to the gas chambers, with the men moved to one area and the women and children in another. Infants and the old and sick were taken to the “Infirmary”–an open ditch where they were shot. Those who looked fit for labor were separated, housed in a set of barracks in the camp, and used to carry out the extermination work. (Numbering about 800, they were known as “Sonderkommando“, the “Special Group”.) The rest were gassed. The corpses were then pulled out of the gas chamber by the Sonderkommando and loaded onto freight carts, which ran along a section of track to large ditches a short distance away in the woods, where the bodies were unloaded and buried. The construction of Treblinka II was finished in June 1942, and the first trainloads of Jews from Poland arrived on July 23.

For the first few weeks, about 5,000 prisoners arrived at Treblinka each day. The inexperienced guards had to determine by trial and error how long to run the gas chambers to insure that everyone was dead; on several occasions, the doors were opened too early, and when some of the prisoners were seen to still be alive, the doors were again closed and the engines started up again. Sometimes the engines would break down, and the prisoners were left standing in the “shower room” until it was fixed.

By the time the Nazis began the systematic liquidation of the Warsaw Ghetto, the process had been worked out. Now, up to 15,000 people a day were shipped to Treblinka. It is estimated that at least 260,000 Jews died in Treblinka’s gas chambers in its first month of operation.

Not satisfied with the speed of the process, the Nazis decided to expand the camp’s killing capacity by constructing new gas chambers. A large building was set up next to the old gas chambers that contained ten separate airtight compartments. The old gas chambers could only hold 600 people at a time; the new ones held 4,000. The deportations from Lodz and Warsaw now increased. By the beginning of 1943, at least 700,000 people had been murdered at the Treblinka II camp.

But by this time, the military situation on the Russian Front began going badly for the Nazis, and SS commander Himmler, fearing that the area might be taken in the future by Soviet troops, visited Treblinka and ordered that all the buried corpses be dug up and burned. The camps at Belzec, Sobibor and Treblinka were all to be dismantled and all trace of their existence hidden–it was assumed that the expanded new extermination camp at Auschwitz-Birkenau would be large enough to liquidate all the remaining European Jews. Auschwitz-Birkenau had itself been built using the lessons learned at Treblinka–with the primary “improvement” being the use of hydrogen cyanide gas instead of engine fumes to kill prisoners in the gas chambers.

From January to August 1943, the prisoners at Treblinka were put to work digging up the bodies of the previous victims and burning them in large open pits. The ashes were mixed with sand and covered over with several feet of dirt. (Transport trains with prisoners continued to arrive, however, from Czechoslovakia, Greece, France, and Yugoslavia, and it is estimated that another 100,000-200,000 people were gassed during this period).

The prisoners in the Sonderkommando, meanwhile, realizing that they themselves would be killed once the camp was dismantled, began organizing an uprising, with the intention of overpowering the guards, taking over the camp, and releasing all the prisoners. Most of the organizing was done by a Jewish former Captain in the Polish Army, Dr. Julian Chorazyski, who worked in the SS infirmary, and a select group of a dozen or so others. When one of the Jewish prisoners, a locksmith by trade, was ordered to repair the door to the guard’s armory, he managed to take an impression from the lock and duplicate the key. With it, the group planned to enter the armory and seize enough weapons to kill the guards and take over the camp. The uprising was planned for April 21.

But on April 19, just two days before the planned revolt, Chorazyski was whipped across the face by the camp Commandant, Franz, who ordered the prisoner to be taken away. Fearing he would reveal the uprising plans under torture, Chorazyski managed to swallow a poison and kill himself. The revolt was postponed. On May 1, another Polish Army officer named Lecher arrived, and soon took command of the group of plotters.

On August 2, 1943, the uprising was carefully launched. One of the prisoners who was in charge of spraying disinfectant around the camp buildings replaced his insecticide with pilfered gasoline and sprayed it on as many buildings as he could. Meanwhile, a group of prisoners entered the armory, killed the officer inside, and quickly concealed a large number of rifles and hand grenades in a small cart full of rocks, which they wheeled to the place where the laborers were working. But then the plan went awry. One of the plotters was unexpectedly set upon by a guard who began to beat him. The others, fearing that the prisoner would blurt out the plan to try to save himself, immediately gave the prearranged signal–a rifle shot–and the prisoners pulled the weapons from the cart and began shooting the guards. The gasoline-soaked buildings were set afire, and the prisoners rushed the main camp gate, where the guards poured machine gun fire at them. About 20 of the guards were killed, but only 250 or so of the prisoners managed to get through the electrified barbed wire fence and escape. In the ensuing weeks, nearly all of them were hunted down, recaptured, and shot. Only 50-60 prisoners managed to escape Treblinka alive.

The gas chambers remained intact, however, and just two weeks after the revolt, the last of the transports, one with 37 cattle cars and the other with 39, entered Treblinka. Most of these were Jewish survivors of the Białystok Ghetto Uprising. After that, the extermination camp was systematically destroyed. The remaining Jewish workers were forced to dismantle the gas chambers and use the bricks to build a farmhouse. The mass graves that had not been incinerated were covered over with dirt and planted with vegetation. Almost nothing remained of the death camp.

The camps at Belzec and Sobibor were ordered dismantled as well, but before this could be completed, the prisoners at Sobibor launched an uprising as well on October 14, 1943. They managed to overpower the guards, burn down the camp buildings, and escape.

In July 1944, as the Soviet Army approached, the remaining prisoners in both the death camp at Treblinka II and the original forced-labor camp at Treblinka I were shot. When the Russians overran the camp sites at the end of July, they found only 67 prisoners still alive in the labor camp.

In 2012, a British archaeological team was granted permission to excavate at the Treblinka site. They found the remaining foundations of the gas chamber buildings, and located several of the mass graves. Estimates of the total number of people killed at the Treblinka extermination camp range from 800,000 to 950,000, most of them Jews, but also Gypsies, Poles, and Russians. Another 10,000 died in the forced-labor camp at Treblinka I.