In 1980, a cargo freighter ran into one of the major bridges over Tampa Bay, collapsing it and killing 35 people. It was the worst shipping accident in Tampa’s history. 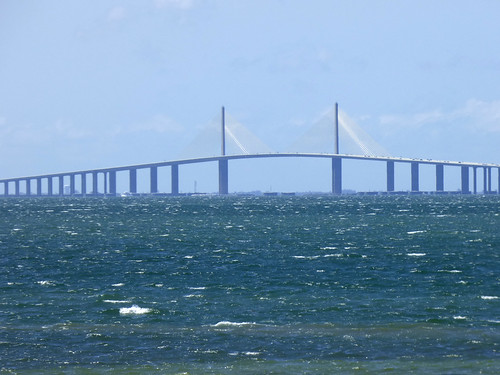 The predawn morning of May 9, 1980, was cloudy and rainy in Tampa Bay, Florida. By 7:30am, the Bay was in the grip of a fierce summer subtropical thunderstorm–winds were reaching 60mph, and heavy sheets of rain reduced visibility to just a few yards.

Out in the Bay, the 609-foot freighter Summit Venture was making its way to Tampa Harbor under the command of harbor pilot John Lerro. The Venture was on its way in to pick up a load of phosphate, used to make fertilizer, from the many phosphate mines that dotted the Tampa area. Tampa Harbor is one of the busiest ports in the US, with a constant traffic of freighters and cargo carriers. It is also one of the most difficult to navigate. Tampa Bay averages only ten feet deep, and shipping traffic has to carefully stay within a narrow dredged channel or risk running aground. There is also the famously changeable Florida weather: the channel from the Gulf of Mexico through Tampa Bay to the port docks is almost 60 miles long, and it is not unusual to enter the Bay in sunny clear weather only to run into a raging tropical thunderstorm halfway in.

On this day, the weather had caught pilot John Lerro and the Summit Venture in a particularly challenging part of the Bay, near the entrance from the Gulf of Mexico. Ahead lay the Sunshine Skyway Bridge. Built in the early 1970’s, the bridge, consisting of two side-by-side spans (one for northbound traffic and one for southbound) connected the city of St Petersburg with Sarasota. Just outside the bridge, the shipping channel made a sharp 13-degree turn to allow vessels to pass under the high central arch, between the Skyway’s support piers.

As the phosphate carrier approached the bridge, however, she was in trouble. The rain and storm clouds had blinded the Summit Venture’s radar, and visibility was so low that from the bridge pilot Lerro couldn’t even see his own bow. The ship weighed 20,000 tons, but because she was empty she sat high in the water, and the gusting winds blew her around like a toy. Lerro considered turning away from his approach back out into the open waters of the Gulf of Mexico to wait for the storm to subside before trying again, but he knew there were outbound freighters in the channel and was afraid that, with everyone blinded by the storm, they could collide with him if he turned across their path. (Unknown to him, all of the outbound cargo ships had already moved to the outside edge of the channel and anchored to ride out the storm.) He also considered pulling to the edge of the channel to wait out the storm, but thought that the wind might then push his ship in towards the bridge. Lerro decided that the safest option was to stay in the channel and pass under the bridge.

Just minutes later, there was a momentary gap in the storm, and Lerro was able to get a glimpse of the Skyway–and was horrified to see that the gale-force wind had blown his ship off-course and the bridge was looming directly in front of him. Lerro quickly reversed engines and dropped anchor to try to stop, but it was too late. The Summit Venture rammed one of the support piers and grounded herself on the abutment underneath. The pier column crumbled, and without support, a span of the southbound bridge measuring over 1200 feet long sagged, cracked, and tumbled into Tampa Bay. It was 7:33am.

On the Sunshine Skyway, the rain and fog had also reduced the visibility, and no one could see that there was now a gaping hole where the bridge had once been. One by one, a total of eight vehicles drove off the edge of the chasm and plunged to the water 150 feet below–including the Greyhound Bus with 26 people aboard, on its normal morning run to Sarasota. In all, 35 people were killed. There was only one survivor–Wesley MacIntyre’s pickup truck had driven off the broken edge of the bridge, but had hit the bow of the Summit Venture below before bouncing off and rolling into the water, and that had lessened the impact.

As motorist Richard Hornbuckle approached the “hump” in the middle of the bridge, he happened to notice that some of the Skyway’s side arches seemed to be missing. Cautiously, he brought his car to a stop, and he and his three passengers got out for a look. They had unknowingly halted just 14 inches short of the gaping hole. Fortunately, Hornbuckle’s stopped car caused other traffic to stop too, and likely saved many lives.

The emergency crews that arrived on the scene had been told only that a boat had hit the bridge. But as the sun began to rise, they were stunned to find a cargo ship, as long as two football fields, stranded on one of the bridge abutments, and almost a quarter-mile of the bridge completely gone. It took divers all morning to recover the bodies from the fallen vehicles.

Over the next few years, the collapsed southbound span and the undamaged northbound span were both torn down and replaced with a new Sunshine Skyway bridge. All that remains of the old Skyway are the sections near shore, which have been converted into fishing piers.

3 thoughts on “Sunshine Skyway: The Day the Bridge Came Down”