People who wander around in the wilds of northern Florida may be shocked to encounter a “rodent of unusual size” that looks like an enormous guinea pig. This is the Capybara, a giant South American rodent that has now made Florida its home. 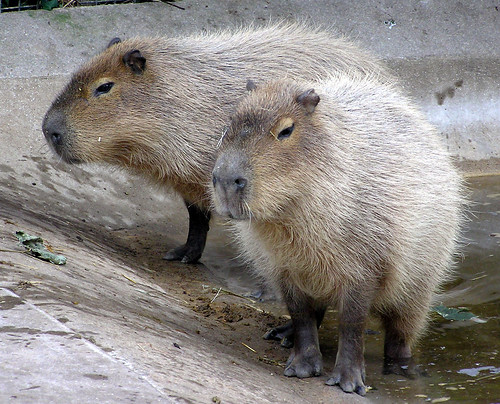 The largest group of living mammals are, by far, the rodents, with about 1500 species. And the largest of the living rodents is the Capybara, Hydrochoerus hydrochaeris.  Weighing in at around 100 pounds, the Capybara’s closest living relatives are the familiar petshop Guinea Pigs or Cavies. Like the Guinea Pig, the Capybara is native to South America, but unlike its tiny mountain-dwelling cousin, the Capybara is an animal of riverbanks and canals.

Capybaras once lived in North America. During the Ice Ages, there were two different species of Capybara living in the southern US, including Florida. They went extinct about 10,000 years ago–likely with a little help from the humans that invaded the area. Since then, Capybaras have been limited to South America.

The scientific name means “water pig”, and although it is not actually porcine, the Capybara is definitely a water animal. Ecologically, it is the South American equivalent of the African Hippopotamus. The Capybara has webbed toes to help it swim, and its eyes and nostrils are located at the very top of its face, like an alligator’s, allowing it to swim along unnoticed with just its eyes and nose showing. The rodents can also hold their breath for up to five minutes at a time. Although Capybaras happily munch on water plants, their primary food comes from grazing on grasses, tree leaves and fruits along riverbanks, allowing them to retreat into the water if they feel threatened (like Hippos, they usually stay in the water all day and come out to graze at night.)

The females mate only in water, giving birth to an average of four or five young about four months later. Capybaras are highly social animals, living in groups of two dozen or so, with a dominant male and several subordinate males and females, and sometimes congregating in herds of over 100. In the wild, they live for about ten years: their primary predators are Jaguars and Anacondas. Humans also hunted them, and today they are farm-raised in South America for their meat.

In the 1990’s, Capybaras became a part of the exotic pet trade in the United States, and a number of them were imported from South America and sold in the US. Although they tame easily and act like huge guinea pigs, becoming socially attached to their keepers, they are big animals and require a lot of space (with their own swimming pool), and inevitably a number of them were released into the wild by keepers who did not want them any longer. Escaped/released Capybaras have been sighted in the wild in California, Louisiana, Ohio, and Texas. There have even been reports of escaped Capybaras in England.

In 1995, a wildlife facility near Gainesville was keeping a group of Capybaras for research when a number of them escaped and vanished into the nearby swamps. Today, the wild Gainesville Capybara colony numbers at least 60 individuals. Elsewhere in Florida, escaped/released pets (kept illegally) often turn up: there have been reports from the Santa Fe, Myakka, and Suwanee Rivers and from the Everglades, and road-killed Capybaras have been confirmed in several places across Florida. In 2001, two young Capybaras managed to escape from the Jacksonville Zoo; one was killed by a car, and during the search for the escapees an unrelated adult female was also found living in the area.

Most of these are likely to be individual escapees or released pets. But Federal wildlife officials have concluded that the Capybaras have established breeding colonies in at least five Florida counties–Alachua, Baker, Bradford, Columbia, and Duval–and have the potential to spread throughout the state.