The frogs are a unique group of animals with an unusual lifestyle. Until recently not much was known about frog evolution. But now a number of fossils have been found which have  shed some light on their evolutionary history. 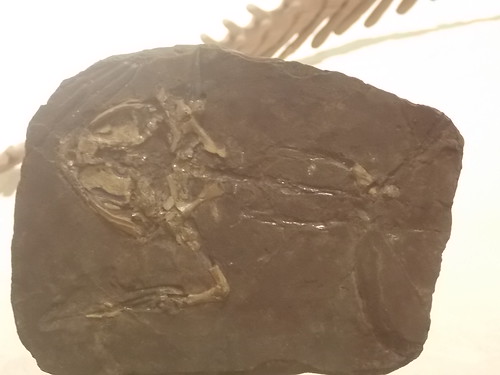 Paleobatrachus fossil on display at the American Museum of Natural History.

Frogs, which are members of the amphibian order known as Anura, have several unique characteristics, nearly all of which are based around their unusual leaping form of locomotion. The most noticeable characteristic is the unique construction of the frog pelvis. The ilium is greatly elongated, and the post-sacral vertebrae are fused into one solid piece known as the urostyle (frogs thus do not have any tails). The ilium and the urostyle together form a three-pronged pelvic structure that is resistant to bending and breaking. The spine itself is very short (in some species, the entire spinal column is only six vertebrae long), and ribs are entirely absent (although some species have moderately long riblike projections from the transverse spinal processes). The vertebral bones are unique in lacking any pleurocentra and hypocentra, and consist of only neural arches.

Another unique characteristic of frogs is found in their legs. The tibia and fibula bones in the lower leg have become fused together into one bone, to withstand the enormous stresses of leaping, and the hind legs themselves have become very long and muscular to provide power for the frog’s jumping mode of locomotion.

The frog skull is also distinctive. It is very large, but also very light. Both the number and size of the cranial bones are less than other typical amphibians. The frontal and parietal bones have become fused into one single bone, and the pineal opening between the parietal bones is entirely absent. The eye sockets are open and larger than the eyeball, allowing the eyeball itself to float freely in the skull (the frog is able to extend its eyeballs down through the roof of its mouth to help push food items into its stomach). Frogs have a large sphenethmoid bone which protects the front of the braincase.

One of the most significant early frog fossils to be found was Triadobatrachus, from 200-million year old deposits in Madagascar. In many characteristics, the Triadobatrachus fossil is intermediate between the modern frogs and their Labrynthodont amphibian ancestors. The skull is very froglike, with a large sphenethmoid bone, fused frontal and parietal bones (although these are longer than they are in any modern frog), and large open orbital sockets. The ilium is much longer than in the earlier Labrynthodonts, but not as long as it is in modern frogs. The skull structure and elongated ilium, along with the large back legs and the lack of ribs, immediately mark Triadobatrachus as a very primitive frog.

Many of these features, however, are only poorly developed in Triadobatrachus, and seem to be in the process of evolving towards the modern frog traits. The ilium in Triadobatrachus lacks a strong connection to the spine, unlike modern frogs. The distinctive frog urostyle is also absent, and Triadobatrachus has a short tail, something no modern frog has. The spine, though somewhat shorter than in Labrynthodonts, is still almost twice as long as any modern frog, and the rear legs are proportionately still very small, though somewhat larger than the front legs. The tibia and fibula bones are unfused and separate, making it likely that Triadobatrachus was not a very efficient leaper. The bones of the pectoral girdle are relatively small and light, unlike the heavy pectoral bones of the modern frogs, which are built to withstand the enormous jarring forces encountered upon landing after a long jump. Triadobatrachus thus seems to combine traits from two very different groups of animals–the Labrynthodonts and frogs–and can only be viewed as an evolutionary transition between these two groups.

In 1985, a new fossil frog was discovered in Arizona and called Prosalirus bitis, which dates from roughly the same time as Triadobatrachus. Like Triadobatrachus, Prosalirus did not have greatly enlarged legs, but possessed the typical three-pronged pelvic structure. Unlike Triadobatrachus,Prosalirus had already lost nearly all of its tail. Without further fossil discoveries, it is impossible to tell whether Triadobatrachus or Prosalirus was the ultimate ancestor of modern frogs (or indeed whether these represent two distinct lineages within modern frogs). But it does demonstrate that already in the Triassic, the frogs had diversified, with the more primitiveTriadobatrachus living alongside the more “modern” Prosalirus.

Some of the best-preserved early frog fossils belong to a genus called Paleobatrachus. Specimens from shale deposits in Germany are so perfectly preserved that even the impressions of internal organs can be seen in some of them. Even the fossilized remains of egg masses and tadpoles have been uncovered.

Paleobatrachus had a body roughly four inches long, with females larger than the males. They were entirely aquatic, and led a lifestyle similar to the African Clawed Frogs found in modern-day pet shops. The legs were designed for swimming, not leaping, and had large webbed feet.

Paleobatrachus was a very successful group, first appearing in Cretaceous deposits about 130 million years ago and with various species surviving, virtually unchanged, all the way to the Pliocene period, about 5 million years ago. But the period of global cooling which took place, eventually leading to the Ice Ages, was more than the genus could handle, and it went extinct. The Paleobatrachus group does not appear to have left any living descendants.