In August 1939, just weeks before Hitler invaded Poland and sparked off the Second World War, a border dispute between Japan and the Soviet Union turned into one of the biggest tank battles in history up to that time, and led directly to the attack on Pearl Harbor two years later. 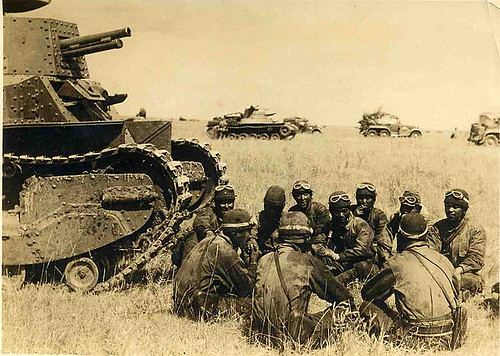 By the mid-1930’s, Japan had fully embarked on a national program of military expansion to form a “Greater East Asian Co-Prosperity Sphere”, essentially a group of colonies that would provide the island empire with the oil, iron, rubber, and other raw materials it would need for economic growth. By 1932, Japanese forces had conquered much of Manchuria and turned it into the puppet state of Manchukuo. But this conquest, the militarists realized, would not be sufficient to provide all that Japan needed. More colonies and sources of raw materials were needed.

There were two opposing ideas about the direction that future Japanese military conquest should take. The Hokushin-Ron, or “Northward Expansion Plan”, favored attacks from Manchukuo into Soviet Siberia, to seize the vast mineral resources there. This strategy found most of its support within the Japanese Army. The Nanshin-Ron, or “Southward Expansion Plan”, by contrast, favored a military thrust to the south into Singapore and the Dutch East Indies to seize the rubber and oil fields there. This plan was supported by most of the Japanese Navy. Debate and bureaucratic infighting raged over which strategy to adopt.

Then in 1939, an unplanned conflict erupted that finally settled the argument.

The Japanese client state of Manchukuo bordered upon the Soviet satellite state of Mongolia, and the exact border was something of a dispute. The Japanese claimed the border at the Khalkhin Gol River, while the Soviets and Mongolians set the border at Nomonhon, a village about ten miles away. Relations between Russia and Japan had already been tense for decades–in 1905, the Japanese Navy thoroughly trounced the Tsarist fleet at the Battle of Tsushima Straits, which established Japan as a world naval power to be taken seriously. After the Bolshevik Revolution in 1917, Japan had sent troops to aid the White Russians against the Communists during the Russian Civil War, and had briefly occupied the Soviet port of Vladivostok for a time. And in 1936, Nazi Germany, Fascist Italy and the Japanese Empire had signed the “Anti-Comintern Pact”, a military alliance aimed squarely at the Soviet Union. In July 1938, a brief border fight broke out at the Manchukuo/Mongolia border, at Lake Khasan, between Japanese Korean troops (Korea had been forcibly annexed into Japan at the time) and Soviet border guards, with 2500 casualties between both forces. Although neither side was ready for a full-scale war, both sides moved additional troops to the border.

On May 11, 1939, a unit of Mongolian cavalry moved into the disputed border zone, looking for grass to feed their horses. They were fired upon and driven out by Manchukuo troops. That led to a series of cross-border raids by both sides, and on May 28, Soviet troops surrounded and wiped out a Japanese Army unit. For about four weeks, both sides dug themselves in and rushed more forces to the area. The Japanese forces, about 35,000 in number, were commanded by Lieutenant-General Michitaro Komatsubara; the Soviet forces were commanded by newly-arrived Corps Commander Georgi Zhukov.

On June 27, Komatsubara, acting on his own without orders from Tokyo, launched a pre-emptive airstrike on the Soviet airbase at Tamsak-Bulak, destroying most of the Russian planes on the ground. Tokyo reprimanded the General for exceeding his orders, but authorized the Japanese Army to remove the Russians from the disputed border area. Tokyo also ordered the commander of the Japanese Army air forces not to make any more strikes on Soviet territory.

On July 1, Komatsubara sent his troops and two tank regiments across the Khalkhin Gol River in two prongs, hoping to encircle the Soviets in a pincer movement. Instead, Zhukov maneuvered his own forces, consisting mostly of 450 tanks, to attack the Japanese on three sides, driving them back across the river in four days. Two weeks later, the Japanese attacked again, and once again the Soviets stopped their advance. 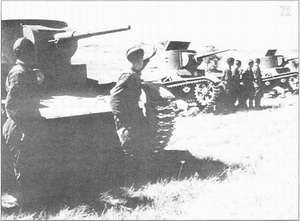 Before Komatsubara could try a third attempt, Zhukov struck back. He had received reinforcements, and his forces now numbered 50,000 troops, 500 tanks, and 450 aircraft. On August 20, Zhukov launched his attack. Unlike the Japanese, who were still wedded to the military strategy of World War One-style infantry attacks, Zhukov’s tactics combined the infantry, tanks and aircraft into one coordinated plan that supported and reinforced each other. By August 31, the entire Japanese force was completely encircled, and was then systematically pounded to bits by air strikes and artillery. Komatsubara and a small number of units managed to break through the Soviet encirclement and make their way back to Manchukuo. The remaining Japanese Army units refused to surrender, and fought to the death. The entire force was wiped out. The whole conflict may have killed or wounded as many as 50,000 troops on both sides.

The very next day, September 1, 1939, Hitler invaded Poland, and Britain and France declared war. At Khalkhin Gol, air combat between Soviet and Japanese fighters continued for another two weeks until a cease-fire was signed on September 16. (During this fighting, the new Japanese Army Nakajima Ki-27 “Nate” fighter demonstrated its superiority to the Soviet Polikarpov I-16–the Nate itself was soon  outclassed by the Japanese Navy’s Zero fighter, introduced in 1940.)

The victor at Khalkhin Gol, Georgi Zhukov, would go on to command the Soviet forces that would eventually defeat the Nazis and join the Allied forces in invading Germany.

Komatsubara returned to Tokyo, and his account of his crushing defeat at the Battle of Khalkhin Gol (known in Japan as the “Nomonhan Incident”) convinced the Japanese military that Japan was no match for the Soviet Union, and the Northward Expansion Plan into Siberia was not workable. So instead, in 1940, Admiral Isoroku Yamamoto was placed in charge of drawing up a plan for a war of southward expansion, to seize Southeast Asia and the Dutch East Indies. As the first step in the Japanese plan, the US Pacific Fleet had to be disabled at one stroke–and this was to be accomplished by a surprise carrier air strike at Pearl Harbor, Hawaii.