In 2009, an extraordinary fossil was unveiled for the world by an international team of scientists working in Norway. Named “Ida” (pronounced “eeh-dah”) after the daughter of one of the scientists, the two-square-foot fossil was breathtaking in its level of preservation–individual hairs could be distinguished, the entire skeleton was there with only one leg missing, even the stomach contents could be seen.

Yet this remarkable fossil quickly became the center of a debate and controversy over the underground private fossil trade, the role of the media in modern science, and the dividing line between hype and scientific discourse. 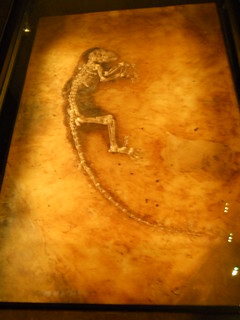 The Ida fossil on display, in a climate-controlled case at Oslo University’s Natural History Museum.

In 1983, an amateur fossil collector (who still remains anonymous to this day) was digging at the famous Messel Pit site in Germany when he came across an extraordinary fossil–a small creature, about two feet long from nose to tail, that had the grasping thumbs of a primate. It was in an amazing state of preservation. The skeleton was over 95% complete–only one rear leg was missing. The clear imprint of fur surrounded the fossil, and the outlines of musculature and internal organs could also be seen–even the faint imprint of the stomach contents. It was, aesthetically and scientifically, a rare treasure.

Forty-seven million years ago, the Messel site was a large deep lake atop a volcanic outlet. On occasion, the volcano would belch out large amounts of carbon dioxide and other gases, which would overpower nearby animals and suffocate them until they fell in the water and sank to the bottom. The lake was a deadly trap for mammals, birds, reptiles, amphibians, fish, and even insects. There, in the cold oxygen-less muck, free from scavengers and bacteria, they would be buried in sediment and slowly fossilized, producing an extraordinary level of preservation, with skin, hair, feathers, internal organs, and other rare details captured within the shale layers. in the mid 19th century, workers began mining the Messel area for shale, and at a depth of almost 200 feet, they hit the fossil layers. Messel fossils became world-famous for their nearly perfect preservation, and were eagerly sought by collectors and professional paleontologists alike. When the shale mine was closed and abandoned in 1971, professionals and amateurs continued to dig for fossils.

In the early 1980’s, for reasons known only to bureaucrats, the German government decided to convert the Messel Pit into a garbage landfill, a plan that was accepted by every major political party except one–the Greens. Horrified that such a paleontological treasure could be lost under a layer of trash, the Greens began encouraging the “emergency excavation” of as many fossils from the site as possible. Unfortunately, excavating fossils from Messel was not as simple a matter as grabbing a shovel and digging–the Messel shale was very fragile, and tended to crumble apart when exposed to air. Immediately after exposure, then, the fossils had to be treated with a plastic resin to harden and protect them, a process known as “transferring”. Only a handful of professional and amateur collectors had the expertise necessary to carry out the transfer process, and as a result many of the fossils that were “rescued” ended up crumbling into dust anyway. But several significant fossils were found. Each time, the Green party representatives went to the press, asking them to publicize the fossils in an attempt to drum up public support for saving the pit. In 1987, a German court rejected the plan to convert Messel into a landfill, but legal appeals continued to tie up the issue until 1991, when the local German government bought the site and protected it. In 1995, Messel Pit was declared a World Heritage Site by the UN. Today, excavation there is allowed only by scientific teams with special permits.

In 1983, in the middle of all this, Ida was found. Her discoverer is still unknown, preferring to remain anonymous, but he or she must have been an accomplished and experienced fossil collector, since the Ida fossil was expertly treated with the resin transfer method. He or she must also have been aware of its extraordinary scientific importance.

For the next twenty years, however, rather than being made available for scientific study, the fossil was kept by the private collector, hidden away in a drawer or a desk top. Some of the reasons for that were probably legal and commercial. Most of the “emergency excavation” at Messel was technically illegal–a fact which was largely overlooked by officials who thought it was worth it to save the fossils from what seemed to be imminent destruction. Also, under German law, the owner of any land where a fossil is found is entitled to half the value of the fossil. So after 1983, Ida’s owner had ample reason to keep quiet about the fossil. In 1995, in the process of securing the site as a UN World Heritage Site, an amnesty was declared, legalizing any fossil that had been found at Messel before it was added to the UN list, and disavowing any claim to them. With that declaration, a flood of private collectors came forward to offer their fossils for sale.

The murky world of private fossil dealers has always been a bone of contention for scientists. Well-preserved fossils can have enormous commercial value (prices of $200,000 or more are routine, and the T rex skeleton known as “Sue” sold for $8 million), and the lure of big bucks has led to shady practices. Every year, people are caught illegally digging up fossils on public land to sell. In some instances, fossils that were uncovered in sections have been sold as separate pieces to separate collectors, increasing their profits but ruining their scientific value. There is also a thriving market in fakes and forgeries, particularly from China–the most famous of which is the “Archaeoraptor”, cobbled together from unrelated fossils, that fooled the editors of National Geographic.

Ida’s collector too decided to sell the fossil, and approached the well-known European fossil dealer Thomas Perner to broker the sale. There were, it turned out, two Idas–the fossil had actually been found as a slab and a counterslab. When the shale layers surrounding Ida had been split open, there was a fossilized image on each layer, though one of them (known as Slab B) was incomplete and not in as good shape or as well-prepared as Slab A. Slab B was sold first, shopped around to several paleontologists, who thought the price was too high for its relatively low quality–it was eventually purchased by Burkhard Pohl, a veterinarian living in Wyoming, who displayed it in his private museum. Then in 2004 Perner approached paleontologist Dr Jorn Hurum, of the University of Oslo in Norway, with the much better-preserved Slab A. Without revealing the identity of the actual owner, and without showing him the actual fossil, Perner presented Hurum a series of high-resolution photographs of the fossil and offered it to him. The asking price was $1 million.

Hurum was stunned. If this fossil was genuine, it represented an extraordinarily rare and well-preserved view of a crucial period in time–when the earliest primates were just beginning to emerge. For decades, paleontologists had debated whether the earliest primates–the line that eventually produced humans–had evolved from lemur-like relatives or from relatives of the tiny tarsier. This fossil could help answer that question, and could determine which branch of the primates was our earliest human ancestor. After seeing x-rays and other tests proving the fossil was indeed genuine and not a fake, Hurum scraped together a group of donors and bought the fossil for $750,000, then took it back to the University of Oslo and formed a team of scientists in several different specialities to study it, in great secrecy.

The fossil was given the formal scientific name of Darwinius masillae. It has the hallmarks of a primate (opposable grasping hands with thumbs, and fingers with flat nails instead of claws) and its basic body shape is very lemur-like, but Ida lacks two distinctive features that all modern lemurs have–a small cleaning claw on the rear feet, and a row of teeth in the lower jaw that are fused together to form a “comb”. After two years of study, Hurum and his team announced that Ida was a transitional fossil linking the earliest proto-lemurs, before they became more specialized side branches, to later primates like monkeys, apes and, eventually, humans. “This is the first link to all humans,” Hurum announced. “The closest thing we can get to a direct ancestor.”

No one was really surprised by that conclusion, since Hurum had long been a supporter of the “lemur” side of the lemur/tarsier debate. Critics noted that Hurum’s cladistic analyis was based on a far fewer number of anatomical traits than is usual for such a study, and there were some whispers that he had cherry-picked his data to reach the conclusion he already wanted to reach. But much of the criticism directed at Hurum’s team had nothing to do with his science. . .

Fully one year before the paper was even published, and before any other scientific team had been given the chance to study the fossil, Hurum’s team had reached agreements with a book publisher and with a TV production company that made documentaries for the BBC and the American History Channel, all of whom agreed to keep the project secret, to produce a book and a documentary TV special on Ida to be released simultaneously with the official announcement in 2009. The publication of the team’s formal scientific paper, in the online science journal “PLoS One”, was coupled with a media blitz more worthy of a political campaign than a scientific announcement, with a series of press conferences in New York, Oslo and London.

When other scientific teams did get the chance to examine the fossil, the hype was found to be . . . well . . . hype. A more complete cladistic analysis demonstrated that Ida was not in the line to later primates and humans–she was instead a side branch that died out before the other primates appeared. Ida was an extraordinarily well-preserved fossil, but that fossil was not the conclusive evidence that the lemur group was ancestral to humans which its supporters claimed it to be. The lemur/tarsier argument continues.

Hurum continues to defend his hypothesis, however, and also defends himself against criticism of his massive PR campaign and media blitz. “Any pop band is doing the same thing,” he concluded. “We have to start thinking the same way in science.”