In January 1942, Japan was riding high. It had control of most of the Pacific, and its attack on the US Navy at Pearl Harbor had been a severe blow. But Admiral Isoroku Yamamoto, commander of the Japanese Navy, knew that he had not won yet. He needed some way to take the battle to the American mainland, to terrorize the American people and convince them that negotiating a peace was preferable to a long and bloody war.

The method he chose to attack the US mainland was one of the oddest ships ever built–the aircraft-carrier submarine. 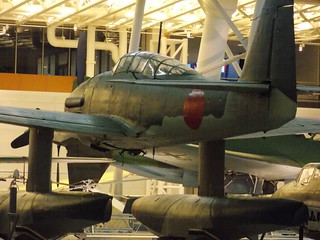 Seiran bomber on display at the Smithsonian collection.

Once the war began, the United States set up a dense network of shore defenses around the West Coast, making it virtually impossible for any surface fleet to approach undetected. Yamamoto realized that he could not simply perform a repeat of the Pearl Harbor attack using aircraft carriers, and had to find a new way of reaching the US mainland. Impressed by the early successes of the German U-Boat fleet against the British, Yamamoto decided that submarines offered the best way of slipping past the American defenses. And the great success at Pearl Harbor convinced him that aerial bombs could do the most damage. Yamamoto decided to combine the two and produce an underwater aircraft-carrier submarine.

The concept already existed–the German, British, Italian and French Navies had experimented with submarine-launched seaplanes during and after the First World War, and in 1941 the Japanese Type B1 submarines already carried a small floatplane that was used for reconnaissance and spotting. The floatplane had folding wings, allowing it to fit inside a small watertight compartment in front of the sub’s conning tower, where it could be launched from a short catapult. Yamamoto decided to expand this concept into a superweapon.

In great secrecy, he ordered the Japanese Navy to begin producing a new class of submarine, the I-400 series. Built with a unique side-by-side double-hull structure for stability, the huge I-400 subs were 400 feet long and 40 feet wide, and would carry sufficient fuel to sail all the way around the world, or three trips to the US and back, without stopping. They were three times larger than any other submarine in existence at the time.

The subs had one 5-inch deck gun, three anti-aircraft machine guns, and eight torpedo tubes. But their primary weapon was to be three specially-built bomber aircraft, the Aichi M6A1 “Seiran”.  These were carried inside a watertight tube at the top of the submarine–the wings and tail fins folded up to allow the planes to fit inside. At sea, the surfaced sub could pull the planes from their hangar, unfold the wings, and launch them using a long steam catapult at the front of the sub.

Shortly after the Pearl Harbor attack, Yamamoto ordered construction to begin on 18 I-400 class submarines, each capable of carrying three Seiran bombers armed with 1800-pound bombs.

To work out a successful strategy, Yamamoto ordered a number of submarine attacks on the American West Coast. On February 23, 1942, the Japanese fleet submarine I-17 surfaced near Santa Barbara, California, and fired a number of shells from its deck gun at the Ellwood Oil Field. And on June 21, the Type B1 submarine I-25 shelled the US military base at Fort Stevens, Oregon, at the mouth of the Colombia River.

These attacks did little damage, but they confirmed to Yamamoto that submarines could successfully penetrate US defenses and reach coastal targets.

The next step was to test the idea of an aerial attack. On September 9, the Type B1 submarine I-25 again approached the US, where the crew strapped two small 180-pound incendiary bombs to its scout floatplane and dropped them over Oregon, a mission that was repeated again on September 29. The idea was to start a raging forest fire that would cripple US lumber production and cause panic in the US. Both attacks failed to cause any damage, but they convinced Yamamoto that his “aircraft-carrier submarine” idea would work.

A number of improvements were made to the I-400/Seiran combination. The submarines were coated with a specialized rubber obtained from Germany that absorbed sound waves, making it harder for American sonar to find them. Launching seaplanes from the Type B1 submarines required 20 minutes to warm up the aircraft engine before takeoff; to eliminate this delay and reduce the chances for detection at the surface, the I-400 class used special external tanks to warm up the Seiran’s engine oil before the submarine surfaced. I-400 crews were able to surface and have a Seiran ready for launch in 7 minutes. It took about half an hour to launch all three planes.

To supplement this fleet, the new Type AM submarines, which had been designed as a small command-center sub with two seaplanes for reconnaissance, would be modified to carry two Seiran bombers instead. Seven Type AM submarine-carriers were planned.

Yamamoto’s plan was to have the 18 large and 7 small aircraft-carrier subs travel independently to rendezvous off the coast of an American city like San Francisco or New York (the long-range subs could reach anyplace in the world) then launch their combined group of 68 Seiran bombers. This would, Yamamoto hoped, cause panic among the US population, leading to pressure for a negotiated peace and an end to the Pacific War.

But events soon turned against the idea. Yamamoto’s loss at Midway in June 1942 crippled the Japanese fleet, put Japan on the defensive, and allowed the US Navy to dominate most of the Pacific. In April 1943, Yamamoto himself was killed when his transport plane was shot down by American fighters. As American submarines began to cut off Japanese shipping and industrial capacity, the planned 18-ship I-400 fleet was reduced to 9, and then later to 5. Only two were actually built.  The smaller Type AM carrier-subs were also cut back, with only two being built.

As the war became increasingly more desperate for the Japanese, and as the number of subs and planes under construction continued to shrink, they changed their plans for using the Seiran bombers. Instead of attacking US cities with a large number of conventional bombs, by 1944 the Japanese were laying plans to use the reduced fleet of carrier subs to attack key cities like Washington DC or New York with a smaller number of bombs containing biological weapons. The Japanese Army had already been experimenting with biological warfare in China, and had developed workable bombs to deliver anthrax and bubonic plague.

But by January 1945, only two large carrier subs–the I-400 and the I-401–had been completed (a third, the I-402, was converted into a fuel-tanker sub during its construction, in a desperate attempt to get vital fuel supplies past the US blockade). Now the plan was changed again; the available two large carrier subs and two smaller Type AM subs (the I-13 and I-14) would be dispatched to use their ten Seiran bombers to attack the Panama Canal, destroying the lock systems and preventing any more US ships from entering the Pacific from the East Coast. When pilots began practicing for the attack in April 1945, it was found that the Seiran’s bombsight was not accurate enough to hit the small lock targets, and the decision was made to convert the mission into a one-way kamikaze attack–the pilots would dive their planes directly into the targets to insure a hit. The now-unnecessary landing floats on the Seiran would be eliminated, shortening the time needed for launch.

But before this mission was carried out, the plan was changed yet again, when it was realized that most of the US fleet had already entered the Pacific, and therefore taking out the Canal would no longer be useful. Now, the new plan was to use the ten available Seiran bombers in a surprise kamikaze attack against the huge US Navy fleet that was gathering at Ulithi Atoll in the Caroline Islands, preparing for the invasion of Japan. The Seiran pilots began training to crash-dive into American carriers, destroying as much of the American forces as they could. The attack was planned for August 17, 1945. To increase their chances of getting through the American defenses and reaching the carriers, the Seirans were repainted in American colors and insignia, a blatant violation of international law, and the target of intense protests by the pilots, who felt that such trickery was dishonorable.

As the carrier-subs were on their way to Ulithi, the US dropped the atomic bombs, and Japan surrendered.

After the surrender, the crews of all four carrier-subs dumped their Seiran bombers into the sea, to prevent the Americans from seeing that they had been repainted in US markings, then turned their super-secret subs over to the US.

The carrier-submarines were an enormous surprise to the Americans, and they promptly took all four of them to Hawaii to examine them. When word of the odd submarines reached the Soviets, they demanded access too. Rather than allow the Russians to see the subs, however, the US towed them out to the deep ocean near Hawaii and sunk them all. Despite the enormous interest by both the US and USSR in the Japanese aircraft-carrier subs, neither side during the Cold War ever built any new designs, preferring instead to focus on missile-carrying submarines. Today, the concept of an aircraft-carrying submarine has once again been revived, and many modern submarines are now capable of launching Unmanned Air Vehicles (UAVs) for reconnaissance and for attack.

Only one of the Japanese Seiran bombers survived the war, in a bombed-out aircraft factory near Nagasaki, and was surrendered to US occupation forces. It was donated by the Navy to the Smithsonian in 1962, and is now on display at the Udvar-Hazy center in Washington DC.