Originally constructed as a fortress by William the Conqueror to subjugate the British, the Tower of London subsequently became an armory, a prison, a zoo, and the repository for the Crown Jewels of England. The Tower is now a major London tourist attraction. 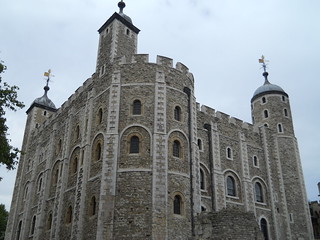 From written accounts and archaeological evidence, we know that William the Conqueror, in the immediate aftermath of his invasion in 1066, built a large number of wooden strongholds with palisade fences all across England, and one of these was at the spot on the banks of the Thames River where the Tower now stands. At some time in the 1070’s, work was begun on a stone replacement for the wooden fortress, built by Norman masons using stones that were imported from Normandy for the purpose. The “Anglo-Saxon Chronicle” mentions that the defensive wall around the Tower was under construction in 1097. The Tower itself was completed some time before 1100.

In the 1190’s, Richard the Lionheart, before leaving for the Crusades, placed the Tower in the hands of the Chancellor William Longchamp, who built several new structures. Richard’s brother John, in an attempt to seize the throne while Richard was away, laid siege to the Tower and took it. When Richard returned from the Crusades, John was, incredibly, forgiven for his attempted usurpation, and became King upon Richard’s death. King John often stayed in the Tower, and was probably the first to keep caged lions and other wild animals there. His son Henry III, upon assuming the throne, built a series of walls and defensive towers, doubling the size of the fortress. Then Henry’s son, Edward I (“Edward Longshanks”) added another defensive wall and moat encircling the entire site.  Edward rarely stayed at the Tower, though, and it was gradually transformed into a storage area, a prison, and a branch of the Royal Mint where coins were struck.

In 1381, the Peasants’ Revolt against King Richard II, let by Wat Tyler, broke into (or was let into by one of the guards) the Tower and looted it. Eighteen years later, Richard was himself imprisoned in the Tower and forced to abdicate to his cousin, who became King Henry IV. During the 15th Century “War of the Roses”, the deposed kings Henry VI and Edward V were executed at the Tower. The Tower’s role as prison and execution site was expanded under Henry VIII, and two of Henry’s own wives, Ann Boleyn and Kathryn Howard, were executed there.

By the time of the English Civil War and the Restoration, the Tower of London had become a Royal Armory and the storage place for the crown jewels. By the 1850’s, most of the official royal functions had moved elsewhere, and the Tower was remodeled to make it look more “medieval”. It became transformed into a museum and tourist attraction, although during both World Wars, captured German spies were imprisoned there. The last execution in the Tower was in 1941, when Nazi spy Josef Jakobs was shot by a firing squad.

Today, the Tower receives over two million tourists a year.