It has often been said that war is the continuation of politics by other means, and both war and politics are usually occasions for long impassioned speeches. But several times in history, the perfect response consisted of just a single word. 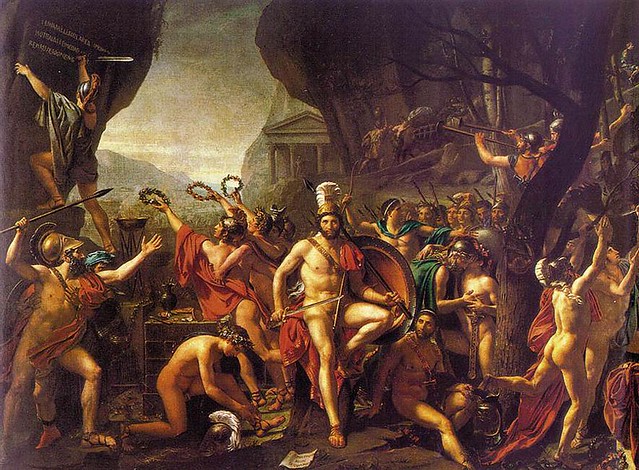 In 359 BCE, Philip II became King of Macedonia, a poor backwater province in the north of Greece. To the glittering Greek city-states, Macedonia barely existed. But Philip was determined to change that. With the help of his son Alexander, Philip reorganized his army into formations of spearmen known as a phalanx, quickly united his neighbors through alliances and conquests to expand his army, and then turned his attention south. In what became known as the “Third Sacred War”, Philip’s phalanxes systematically invaded and conquered the areas of Thessaly, Thrace, Illyria, Olynthus and Phocia. By 346 BCE, Macedonia controlled nearly all of central Greece, and even the key city of Athens had decided to negotiate a peace treaty with Philip rather than fight him.

By this time, Philip was already making plans for a bold military move–the invasion of the Persian Empire. Recognizing that he needed the resources of a united Greece behind him, as well as peaceful conditions at home while his army was away in Persia, Philip now faced the only major Greek city-state that still defied him–Sparta.

For decades, Sparta was a virtual military state with the most powerful army in the known world. In two previous wars, Spartan troops had played a major role in defeating attempts by the Persian Empire–first by Darius and then his son Xerxes–to invade Greece. In the years since then, internal social changes had reduced the size of the Spartan army, but it was still a formidable force. (And on top of that, everyone considered the Spartans to be…well…a little bit crazy.)

And so, in 346 BCE, hoping to avoid a fight that would cost him troops that he would need in Persia, Philip decided to try to bluff the Spartans into an alliance. “It would be best for you to submit at once,” Philip declared in a message to the city. “If I win a war with Sparta, I will raze it to the ground. I will kill your men, and make slaves of your women and children. I will destroy you.”

In response, the ruling council of Sparta, known as the Ephors, sent back a message consisting of just one word: “If”.

We will never know whether Philip was ready to test the Spartan resolve: he soon had his hands full with another opponent. The leaders of Athens had never been happy with their peace treaty with Macedonia, and Philip was never happy allowing the hostile city to remain independent. Tensions grew until, in 339 BCE, Philip’s troops entered Athenian territory and began capturing the outlying towns. Athens reached an agreement with its traditional enemy, Thebes, to unite against Philip, and even, in desperation, unsuccessfully approached the Persian Empire for an alliance. In 338 BCE, the combined Athenian-Thebes army met the Macedonians at Chaeronea. The Athenian alliance was soundly beaten, and both Thebes and Athens came under Philip’s control (the Athenian naval fleet, the best in Greece, was particularly important for Philip’s plans to invade Persia).

Once again, only Sparta remained outside of Macedonia’s orbit. Flush with his victory at Chaeronea, Philip now sent another message to Sparta, asking simply if they wanted him to enter their city as a friend, or as a foe.

Once again, the Ephors responded to Philip’s posturing threats with just a single word: “Neither”.

Shortly afterwards, Philip was assassinated, and his son Alexander assumed the throne. To him, it was enough that Sparta remained neutral and isolationist. Alexander the Great never bothered the Spartans, but took his army into Persia and conquered one of the ancient world’s biggest empires.

In the chaos which engulfed France after the French Revolution of 1789, an army general named Napoleon Bonaparte was able to seize power, declare himself Emperor, and launch a war against the rest of Europe. He won victory after victory until he went too far, invaded Russia, lost most of his army in the Moscow winter, and returned to France in 1814 broken and beaten. He was exiled to the tiny island of Elba, but in 1815 returned to France, raised another army, and launched another war. Prussia and England united to fight him, and the armies met in June 1815 at the little town of Waterloo, in Belgium.

One of Napoleon’s generals was Pierre Jacques Étienne Cambronne. Joining the Grande Armee in 1812, Cambronne had fought in Russia, had joined Bonaparte again after his exile at Elba, and upon returning with him to Paris in 1815, was made a commander of the Imperial Guard, the elite corps of the French army.

At Waterloo, Napoleon hoped to take on both the British and German armies one at a time, beating the British first before the Prussians could arrive. It didn’t work out that way. The British, under the Duke of Wellington, crippled the French Army, and the arrival of the Prussians sealed its fate. But as the rest of Napoleon’s army collapsed and gave up, the Imperial Guard stood firm and maintained its battle formation. A representative of the British Army rode forth to demand their surrender.

There are different versions of what happened next. In the most popular account, General Cambronne, when asked to surrender, replied by shouting out just one French word: “Merde!” (“Shit!”) By other accounts, he answered “The Guard dies, it does not surrender!” (in some accounts, it was instead General Claude-Etienne Michel who said this), and this defiant cry was carved into the statue honoring General Cambronne in his native town of Nantes. Cambronne was seriously wounded and captured in the subsequent fighting (in some versions, he was actually captured at the very beginning of the fighting, and never said anything at all to the British). He later married the Scottish nurse who cared for his wounds.

It was the “Merde!” story, however, that captured the public’s imagination. Known as “The Word of Cambronne”, the tale was later incorporated into Victor Hugo’s novel Les Miserables, and also found its way into the British “Captain Horatio Hornblower” stories.

By December 1944, it was becoming apparent that Germany was going to lose the Second World War. British, Canadian and American troops had landed at Normandy in June and were working their way steadily across Europe. In desperation, Hitler ordered a last-ditch attack directed at the port city of Antwerp in Belgium, which would drive a wedge between the British and American forces, cut off the supply lines from Antwerp, and force the Allies to retreat. The attack was launched on December 16.

Coming as a complete surprise, the German offensive was a success. The Allies were pushed back and the Germans advanced in an arc that gave the fight its name–the Battle of the Bulge. Only a few American units were able to stand firm in the face of the onslaught, and one of these was the 101st Airborne paratroopers in the town of Bastogne. Bastogne was a vital transportation hub, and the Americans, though virtually surrounded, had been ordered to hold it at all costs. The Germans pounded them relentlessly with artillery and infantry attacks.

Then, on December 22, four German officers approached the American lines at Bastogne with a white flag, and were escorted to a regimental headquarters, where they presented a written request from the German Commander pointing out that they were surrounded and their only option was “honorable surrender”.

The surrender request was passed on to the American commander in the area, Brigadier General Anthony McAuliffe. At first, McAuliffe was confused and thought that the Germans wanted to surrender. Upon realizing that they wanted him to surrender, he crumpled up the message and snarled, “Us surrender? That’s nuts.” After some discussion, McAuliffe told his staff that he didn’t really know what to say in response, whereupon one of the officers pointed out, “Your first remark would be hard to beat.” And so the official communique, consisting of just one word, was typed up: “NUTS!”.

When the reply was given to the German delegation, they did not understand the slang word, and, confused, had to ask if the answer was affirmative or negative. They were told that it was “decidedly not affirmative”.

Days later, the German attack stalled, and the Americans advanced again. Within five months the war would be over.