Northeast Pennsylvania is most famous for its once-thriving coal mining industry. But centered near the same area was another mining trade that was just as important in the late 19th century–and became known as the Slate Belt. 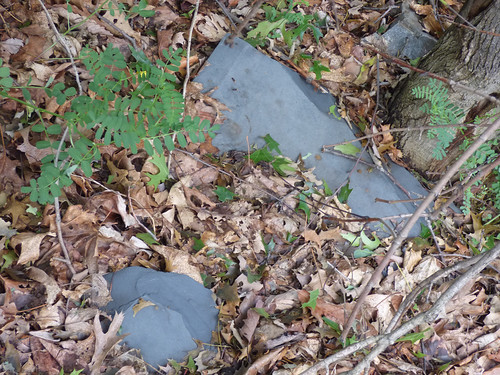 Since medieval times, slate has been highly-valued as roofing material. Slate is formed, geologically, from compressed mud and shale, and its layered structure means that it can be split along the bedding planes to form flat thin sheets, perfect for roof shingles. Unlike wooden shingles, slate does not rot or warp, is fireproof, and is durable enough to withstand the elements for decades. It was the preferred material for estate manor houses and churches. However, because slate was relatively rare in Europe and required large amounts of labor to extract and prepare, it was reserved for only the most expensive of buildings.

When English colonists settled in Pennsylvania, though, they found large deposits of slate. These were often taken advantage of to provide roofing shingles for farmhouses and barns. Over time, new uses were found for the stone, and it became an important industrial material. Schoolhouse blackboards and writing slates, billiard table tops, kitchen counters, grave markers, and, in later years, telephone exchange boards, were all made from slate. But by far the most extensive use was for roofing, and soon slate from Pennsylvania was being shipped all over the country.

The largest deposits of high-quality slate were found in the “Blue Mountains” of upper Northampton County, between the Delaware and Lehigh Rivers just south of the Pennsylvania coal mining district. In 1848, a Welsh immigrant named Robert Jones, who had owned slate mines in Wales, settled in the Blue Mountains and founded the town of Bangor. Miners from Cornwall, in England, moved in shortly later, founding the towns of Wind Gap and Pen Argyl. The area around the three towns became known as “the Slate Belt”.

Although there were soon dozens of small slate quarries in the area, Jones was the first “slater” to utilize industrial methods of mining. Where previously the slate had been dug out by hand, Jones introduced the use of dynamite to blast out large portions at a time. In later years, dynamite was replaced by precision drilling, which laid out a series of holes which could then be split to form uniform pieces. Chunks of rock weighing several tons were lifted out of the quarry with chain hoists, then tested for their suitability. The high-quality slate that separated cleanly into thin uniform layers, was set aside for splitting and shaping into shingles. The lower-quality rock went towards blackboards and other products. Some two-thirds of the tonnage that was quarried was flawed, either by cracks in the rock or by veins of other minerals, and these were discarded in huge waste piles, each over 100 feet tall. By the time Jones left Bangor to enlist in the Union Army in the Civil War, the Slate Belt, just 24 square miles, was producing over half of all the slate used in the United States

In the coal-mining regions just north of the Slate Belt, a network of railroads appeared to transport the coal, and the railroad companies themselves began buying up the coal mines and consolidating them. In the slate mines, however, there was virtually no rail transportation until 1879, when the Bangor-Portland Railroad was established. These trains were loaded with Portland cement manufactured in Nazareth and Martins Creek, then went the 15 miles north to Bangor and Pen Argyl to pick up a further cargo of slate tiles, finally delivering it all to ships at Port Morris, New Jersey. The Bangor-Portland Railroad never had any interest in buying up the slate mines or the cement factories. The result was that each of the several dozen slate quarries that operated at any given time were independent small companies which were never bought up and consolidated into large corporations like the coal mines were.

Quarrying and moving the heavy slabs of slate was hard and dangerous work. The delicate task of splitting the rock, by hand, into thin layers and shaping them into finished products, like shingles or pool tables, required even more training and skill. “Slaters” were some of the highest-paid workers in the country, and this attracted groups of immigrants who left Europe for a better life in America. The original Pennsylvania slate miners were Welsh and Cornish, and they had worked slate quarries or coal mines in England. The next wave of immigrants into the area were from rural Germany. They became known as “Pennsylvania Dutch” (a corruption of “Deutsch”, or “German”), and in addition to working the slate quarries, large numbers of them settled the rural Lehigh Valley as farmers.

By the 1890s, a wave of Italian miners began showing up in the Slate Belt. Unlike the earlier Anglo-Saxons from England and Germany, the arrival of the Italians caused racial and ethnic strife. The Italians lived in their own little enclave between Bangor and Pen Argyl, in a town they called “Roseto”. As more wealth was produced by the slate quarries, other ethnic groups began to arrive: Irish, Polish, and Jews from Eastern Europe and Russia. The white population of the Slate Belt, in turn, responded with virulent racism, anti-semitism, and anti-catholicism. By 1900, Bangor and Pen Argyl had one of the largest branches of the Ku Klux Klan in Pennsylvania, and the local high school sports teams kept the name “White Knights” for several decades afterwards (until political pressure forced a change to “Green Knights”).

But the glory days of the Slate Belt were already ending. In 1903 the quarries employed over 4,000 miners and produced 140 million square feet of slate. It was the highest point they would ever see. Some of the quarries were drying up, running into low-quality rock called “hard tack”. Slate roofing shingles began to be replaced by asphalt shingles, which, though far less durable, were very much cheaper, lighter, and easier to install. Demand for slate dropped, and although a handful of mines were able to hang on until the 1920’s, producing specialty items like billiard tables, mausoleum vaults, and non-conducting electrical switch boards, newer plastics and metals soon replaced the quarried stone.

Dozens of mining companies went out of business, and the wealthy Slate Belt residents that had made their fortunes from the stone now moved to Allentown or Philadelphia. By the time the Great Depression hit in 1929, virtually all the Slate Belt mines had closed, leaving behind nothing but huge rain-filled open-quarry pits and towering slag piles of waste slate.