In December 1943, the Nazis launched an air raid against the Allied naval installation at the port of Bari, in Italy. The raid destroyed nearly all the Allied ships in the port, and became known as “The Little Pearl Harbor”. But the real disaster at Bari came when almost 70 Allied seamen were killed by poison gas mustard bombs–from their own side. 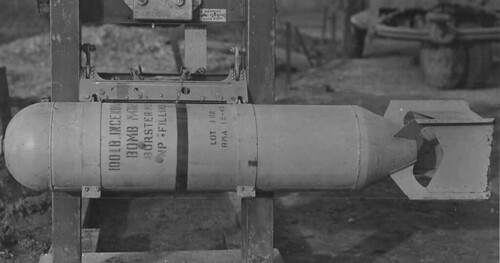 In September 1943, during the invasion of Italy, British paratroopers landed in the port city of Bari, near the “heel” of the Italian peninsula’s “boot”, and captured it without a fight. The city of 200,000 people quickly became an important shipping center for the Allies, who used it to send cargo and supplies to North Africa, the Balkans and to allied troops fighting further north in Italy. During the next two months, the harbor was routinely packed with British cargo ships and American Liberty ships. Because it was thought that the Nazi Luftwaffe did not have enough airpower in the area to make an effective raid on the port, there was no Allied fighter cover at Bari and no fighter bases within range. Also, as dock workers labored round the clock to load and unload ships to rush vital supplies to troops fighting at Monte Cassino, the entire harbor was illuminated by floodlights all night long. Some of the cargo ships had already been waiting almost a week to be unloaded, and another convoy was due any day now.

On the early afternoon of December 2, 1943, a lone twin-engined German Messerschmitt Me-210 “Zerstorer” reconnaissance plane flew over Bari and found the harbor packed with what looked like at least 30 ships, including cargo vessels from the US, Britain, Poland, Holland, Norway and Italy. There were no fighters, and the few anti-aircraft guns in the port didn’t even bother to fire at it. Upon receiving this information, the commander of German Luftflotte 2, General Wolfram von Richthofen (the cousin of the World War One air ace) decided that it was an opportunity he could not pass up. Scattered at various airfields, he had 105 Junkers Ju-88 twin-engined bombers available. Most of these were based in northern Italy, still occupied by the Germans, but some were based in Yugoslavia. To fool the Allies and, he hoped, to evade their air patrols, von Richthofen decided to send his bombers on a roundabout route to Bari, first flying east towards Yugoslavia and then turning south and west to strike the target from an unexpected direction.

The raid reached Bari at 7:25pm that night, just as it was getting dark. The first few bombers dropped aluminum strips, called “chaff”, that reflected the Allied radar waves and made it impossible to track the incoming planes. They also carried flares to light up the target, but this wasn’t necessary, since the harbor was already brightly lit by its own floodlights. The Ju-88s, roaring in at mast-top level, had achieved complete surprise, and bombs tore into the Allied ships, packed gunwale to gunwale in the harbor. Fires spread from ship to ship, and flames and explosions sunk 17 vessels and damaged 7 more, destroying 31,000 tons of cargo and supplies, and also wrecked the loading dock areas. The raid lasted only 20 minutes. The vital port was put out of commission for almost a month. It was a major blow to the Allies.

But the worst part of the raid was the result of a well-kept secret.

During World War One, both the Entente Allies and the Germans had used poison gas on each other. The most lethal of the chemical weapons used during the war was mustard, which was not actually a gas, but a thick oily liquid that was dispersed by the shell’s explosion and formed an aerial mist that then settled to coat all the exposed surfaces in the area, where it caused severe chemical burns to anyone who came into contact with it.

After World War One, most nations signed the Geneva Protocols, outlawing the use of poison gas in warfare. The US refused to ratify the treaty, but when America joined the Second World War in December 1941, President Roosevelt announced that the US would not use chemical weapons unless the Axis nations used them first.

During the joint Allied landings in North Africa, Sicily and Italy, the US took along a supply of artillery shells and bombs filled with mustard oil, intended to allow Allied forces to retaliate immediately if the Nazis or Fascists resorted to the use of chemical weapons to oppose the landings. This was done with the highest levels of secrecy. As a result, when the Liberty shipUSS John Harvey left the United States with a convoy bound for the ports at Algeria, Sicily and Bari, the captain was not told that she had been secretly loaded with 2,000 M47A1 poison-gas bombs, each holding around 65 pounds of mustard oil.

During the Bari raid, no bombs had hit the John Harvey, but the ships around her had been struck and were on fire, and the flames spread relentlessly. When they reached the Harvey’scargo hold, the conventional munitions she was also carrying exploded in a huge fireball, killing everyone on board. Pieces of the chemical bombs were thrown hundreds of feet in all directions, and tons of mustard oil were vaporized. Some of it settled onto the harbor surface, where it mixed with the engine oil that was leaking from dozens of sinking ships, coating hundreds of survivors who were in the water. The rest of the mustard formed an invisible cloud that was carried by the smoke across the harbor, settling on any exposed surfaces. The seven-man team from the 701st Chemical Maintenance Company assigned to stay with the bombs had all been killed in the explosion, so no one surviving at the scene knew about the mustard gas.

In all, about 200 civilian merchant sailors and military staff were killed in the raid and another 800 were wounded and hospitalized. The number of Italian civilians killed an injured is unclear, since many of them left the area immediately after the raid, but it may have been as high as 1,000.

Within 24 hours, a little over 600 people at the wrecked port began to develop large chemical burns on their skin: many were temporarily blinded by chemical irritation of their corneas. Rescue personnel and medical staff who had been in contact with the wounded also began exhibiting similar burns. Over the next two weeks, 69 patients died from lung infections and fluid buildup caused when the inhaled poison gas corroded away the lining in their lungs.

Many of these might have been saved with proper treatment (hundreds of patients were left in their oil and mustard-soaked clothing), but because of wartime secrecy, neither the wounded nor their doctors were told of the presence of mustard weapons. Some of the doctors, however, suspected that the burns were being caused by a chemical agent, and speculated that the German bombers had dropped it. When a chemical warfare specialist was called in from Algeria, he concluded that the victims were suffering from mustard burns. Within days, a bomb fragment was recovered from the wreckage which was quickly identified as an American mustard gas bomb. It was now apparent that the poison gas was not German, but American. All of this information was sent in a report to General Eisenhower. But at this point the British Government, with the cooperation of the US, clamped a lid of secrecy on the whole affair. The entire attack was at first hidden from the press; when the disastrous raid was finally reported in the US and England, the facts about the mustard gas were censored out. The chemical fatalities were officially listed as the victim of “burns”.

The details of the accidental chemical weapon release at Bari were not declassified until 1959.

Neither side used chemical weapons in Europe during the Second World War, even though the Nazis had discovered and produced three different types of nerve gas, completely unknown to the Allies. The US did not ratify the Geneva Protocols until 1974.

One thought on “The Bari Air Raid: When the Allies Unintentionally Gassed Their Own Side”