In 1940, after the fall of France, Britain stood alone against Nazi Germany. After narrowly averting an invasion during the Battle of Britain, London became the target of a sustained bombing campaign known as “The Blitz”–the German Luftwaffe dropped over 35,000 tons of bombs on the city. During this time, the British Government of Prime Minister Winston Churchill was housed in a super-secret protected underground bunker in the heart of London. 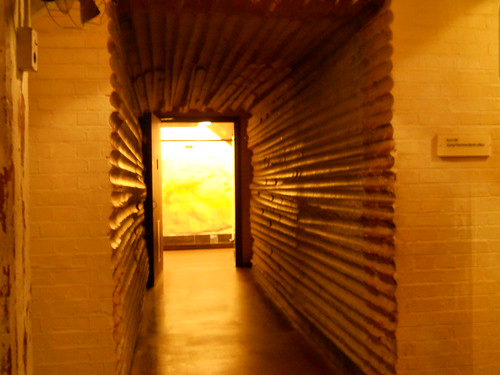 The ten-foot-thick walls of the underground bunker.

By 1937, the British Government, recognizing that war with Nazi Germany was a distinct probability and that London was vulnerable to air raids from the Luftwaffe, began searching for a place to build a secure bombproof underground bunker to protect government and military officials. At first, it was decided that a series of shelters would be built to disperse the government throughout London, but it was quickly decided that this would take too long, and instead a single central bunker would be built. In May 1938, the basement of the New Public Offices building, in Whitehall, was selected, and construction began in June. Carefully hidden under ten feet of ground, and built under tight security, the basement level was fitted with extensive communications equipment and a ventilation system that would protect it from poison gas. The original construction contained only three rooms and was intended more as an air raid shelter, but in early 1939, the entire complex was expanded to allow it to house the civilian War Cabinet and the military Central War Room and serve as an entire underground office complex. Work was finished on August 27, 1939. Five days later, Germany invaded Poland, and World War Two began.

In October 1940, after the Battle of Britain, it was decided that the bunker needed more protection, and a 5-foot layer of steel-reinforced concrete (known simply as “The Slab”) was added, designed to resist bombs up to 500 pounds in size. At the same time the bunker was expanded to 30,000 square feet–almost three times its previous size. At around the same time, a much smaller secondary bunker, code-named “PADDOCK”, was completed in the Dollis Hill section of London. Churchill only used it once.

The final Whitehall underground bunker complex contained several vital facilities. The Map Room was the intelligence center of Britain, where the global war situation was updated 24 hours a day and produced a daily intelligence summary for military and civilian officials. Encrypted communications allowed a secure telephone link between Churchill and American President Franklin D Roosevelt in Washington DC (one of the secure telephone rooms was disguised as a locked toilet), and a complete BBC broadcasting studio allowed Churchill to make speeches to the nation from his underground shelter. Although Churchill and his family were provided full apartments in the bunker, he didn’t like sleeping underground and preferred to spend the night in another apartment in the Whitehall building or his official residence at No. 10 Downing Street. The bunker complex also contained apartments and dormitories for military chiefs and cabinet ministers, and all the necessary secretaries, typists, telephone operators, and other staff. A total of 115 War Cabinet meetings were held in the bunker throughout the war.

When Japan surrendered on August 15, 1945, the existence of the underground war rooms was still a closely-protected secret, and the entire complex was sealed off. Desks, phones, maps, radios, and papers stayed exactly as they were on the day the war ended. In 1948, recognizing its historical importance, the British Parliament decided to preserve and restore the bunker to its wartime condition. Although the complex was not open to the general public, visitors could request access from the British Ministry of Works–though only 5,000 visitors were actually admitted from 1948 to 1984.

In 1974, the Imperial War Museum was asked if it could take over the bunker and run it as a public museum, but the staff did not think they had the resources. It wasn’t until 1981 that Prime Minister Margaret Thatcher, an admirer of Churchill, provided the necessary funding, and 19 rooms inside the bunker, including the Map Room, the War Cabinet Room, the Communications Room and Churchill’s apartment, were opened to the public in 1984. In 2003, after a restoration effort funded mostly by private donations, the Courtyard Rooms, where staff were housed, were opened, and in 2005 a multimedia center focusing on Churchill’s life was opened, featuring taped interviews with people who knew him, and a digitized archive of documents.

Today, the War Rooms are one of the most popular tourist attractions in London, with over 300,000 visitors per year.. 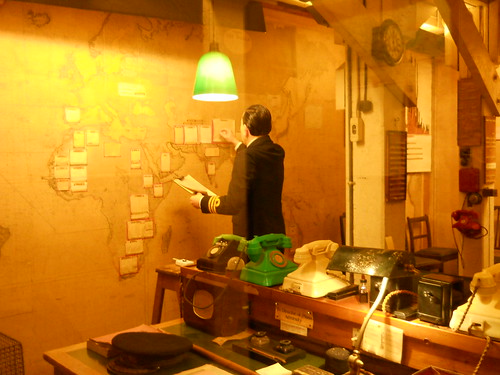