Everyone knows all about the 1960’s Space Race between the United States and the Soviet Union. But there was also a scientific “Earth Race” between the two superpowers, won by the Soviets, that is now largely forgotten…. 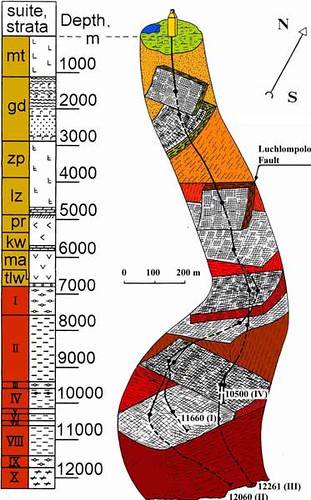 In the early 1960’s geologists knew very little about the Earth’s interior structure. The theory of plate tectonics had not yet changed the paradigm, and although geologists knew from seismic data and the study of volcanoes that the Earth was constructed in a series of concentric spheres, with a molten iron-nickel core, a liquified mantle, and the thin solid crust on the outer surface, they didn’t know much more than that.

From seismic readings measured during earthquakes and explosive testing, geologists knew that there was an abrupt change in the nature of the rocks roughly 2.5 miles below the surface. This became known as the “Conrad Discontinuity”, and it was postulated that it was caused by a transition from molten surface granite to deeper molten basalt. But the only way to know for sure was to obtain a sample.

Oil companies were already drilling deep into the earth’s crust, but drilling deep enough to examine the Discontinuity required technology and methods drastically different from any that existed. Both the United States and the Soviet Union took up the challenge, and the “Earth Race” began, as each tried to outdo the other by drilling what would be the deepest hole in the planet.

The Americans quickly took the lead. “Project Mohole” had already been contemplated back in 1958, and proposed to drill all the way down to the border between the mantle and the crust, known as the “Mohorovičić Discontinuity” or “Moho”. Project Mohole proposed to use offshore oil-drilling technology (which was then a closely-guarded technological secret jealously protected by each oil company) to drill through the ocean floor (where the crust was thinner) to the mantle. The drill would be mounted on an old navy barge that was named CUSS (after the Continental, Union, Shell and Superior oil companies who were providing the equipment). Drilling began in earnest in 1961, off the shore of Mexico. They reached a depth of 600 feet below the ocean floor, and laid plans for a bigger platform and better drilling equipment. But by 1966, the project proved to be more technically challenging than first thought, and the budget swelled from $14 million to over $150 million. Congress pulled the plug and ended its funding. Project Mohole ended.

That left the Soviets. In 1962, the Russian government formed the Interdepartmental Scientific Council for the Study of the Earth’s Interior and Superdeep Drilling. Their goal was less ambitious than the Americans–rather than drilling all the way to the mantle, they planned to go to a depth of 15,000 meters. In 1965, they selected a land site in the Kola Peninsula, next to Finland, and built a 200-foot tower to house the drilling equipment. Over the next five years, Soviet engineers developed an entirely new method of drilling to use at the site. In offshore oil drills, the hole in the seafloor is bored out by a drill bit at the end of a hollow pipe, which is rotated by engines on the surface. As the drill bit goes deeper, new sections of rotating pipe are added. The Soviets, however, found that this would not work for a really deep borehole. As the drill went deeper, the temperature rose, and it was necessary to pump a cold lubricant, known as “drilling mud”, down the shaft into the drill bit to keep it from overheating. To do this, the Russians developed a way to keep the pipe sections stationary and use the pressure of the drilling mud itself to spin the drill bit. They also fitted scientific instruments into the bit that were capable of taking direct measurements underground, rather than waiting for the cores to be pulled to the surface. This allowed for more accurate data, since the rocks would be altered by the change in pressure as they were brought up through the borehole. With this new apparatus, the Soviets began drilling at Kola in 1970. They would keep drilling for the next 24 years.

There were actually a number of different holes drilled at Kola, each of them branching away from a shallower central shaft. The deepest of these turned out to be the borehole labelled SG-3, known as the Superhole. Measuring just nine inches in diameter, the superhole was 12,261 meters deep (40,200 feet, or about 7.5 miles), roughly one-third of the way through the outer crust to the mantle.

The data obtained from the Superhole revealed a number of surprises.  The Conrad Discontinuity, it was found, did not actually exist. Rather than a change from granite to basalt, the surface granite itself underwent a phase change from the pressure and temperature, that altered its physical characteristics. Soviet researchers also found chemical traces of water at the bottom of the hole–since it was impossible for surface water to make its way this deep, it was postulated that the water resulted from stray atoms of hydrogen and oxygen that were forced out of the rocks by the pressure and then chemically combined to form water.

Most surprising of all, the Soviets, during their drilling, found a subterranean layer of marine deposits, almost 7,000 meters beneath the surface, that were dated at two billion years old, and which contained the fossil traces of life. Microfossils of 24 different species of plankton were discovered in the sediments: they had been coated with an organic compound that preserved them in the heat and pressure and left them remarkably intact. At the time, it was some of the oldest signs of life that had ever been discovered.

In 1994, the drill began to encounter problems.  The rate of temperature increase at depth was much higher than expected, and at 12,000 meters it was already 356 F, too much for the drill bit to handle. Also, the rock itself began to become less dense and more permeable, making it act like a plastic and therefore harder to drill (every time the drill bit was taken out for maintenance or replacement, the semi-solid rock would slowly flow in to fill up the hole and it had to be re-drilled again). In 1994, drilling was halted, and in 2005, when no solution to the problem could be found, the entire Kola project was ended. A steel plate was welded into place over the borehole and the site was abandoned. The core samples taken from the Superhole are stored at the nearby town of Zapolyarniy

The Kola Superdeep Borehole, as it is known today, remains the deepest hole ever made.

Today, from time to time, an odd story appears on various fundamentalist Christian websites and tabloid newspapers. According to this story, the Russians actually stopped drilling because their borehole had broken out into a huge underground chamber, from which frightening screams and wails could be heard. Yes, that’s right–the Kola Superdeep Borehole actually drilled its way into Hell, and the “godless communists” quickly abandoned the project and sealed it up to hide the secret.

Needless to say, that story is utter tommyrot.

2 thoughts on “The Kola Borehole: The Deepest Spot on Earth”