In our modern world, we take electricity for granted. It powers most of the conveniences of 21st century life. But the use of electricity, particularly in the home, is not much more than 100 years old. And in its beginning, home electric power was the subject of a bitter and long-running feud between two of the most brilliant and famous inventors in history–Thomas Edison and Nicola Tesla. 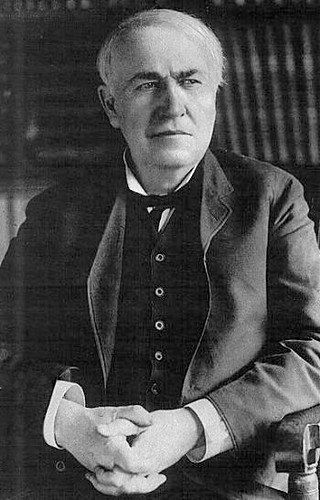 Contrary to what you probably learned in school, Thomas Edison did not invent the incandescent electric lightbulb. Others had already produced artificial light by passing an electric current through a filament inside a glass bulb. But Edison’s lightbulb, invented in 1879, was the first one that was really practical–it gave the best light, operated more efficiently, and could be manufactured cheaply and easily.

But even the best lightbulb is useless without electricity to run it, and in 1879, no house in the US had electric power–homes and streets were lit by gas lamps. Edison set out to change this. In 1882, Edison built his own power plant using six steam-powered generators, at Pearl Street Station in New York, in the middle of a commercial district. In a short time, he had 85 paying customers, who used his electricity to power a total of 400 electric lamps. Two years later, this had grown to 508 customers with over 10,000 lamps.

But there was a problem. Edison’s electric power system was based on DC–“direct current”–in which electricity is generated at a source and then sent around a wire circuit on a one-direction round trip. Because the strength of an electric current drops with distance, the DC system suffered a significant power loss if the wires stretched for any long distance (more than a mile or so), unless they were run at a very high voltage–which not only presented a serious danger to anyone who touched a live wire (the age of electricity had brought about an entirely new way of dying–“electrocution”), but also frequently melted the wires, shutting down the whole circuit. So Edison was forced to run his system at a relatively low voltage. This was a severe limit, and Edison realized the power-loss problem would be a crippling obstacle to any large-scale electric power grid.

To try to solve the problem, he turned to one of his employees–a Serbian immigrant named Nicola Tesla. Tesla, a brilliant mathematician and engineer, came up with an idea for a solution–instead of using DC direct current, he proposed using a system based on AC “alternating current”, in which the flow of electricity was switched back and forth in both directions many times a second. This allowed current to be carried at much higher voltages without melting the wires, thereby allowing the current to be carried in very long wires without significant loss of power. Edison, who was more an experimenter and tinkerer than a theorist, thought it was “impractical”. The two soon clashed, as much over personalities as ideas, and Tesla quit the Edison Company in 1885.

When an investor named AK Brown offered to finance the design of an AC power system, Tesla jumped at the chance, and quickly produced an AC generator and motor, and a “transformer” that was used to take the low-voltage electricity that was produced by the generator, and step it up to a much higher voltage so it could be transported by wire across considerable distance. Then the electricity entered another transformer to be stepped down to a much lower (and safer) voltage before entering the final destination and powering a lamp or other electrical device. By December 1887, Tesla had worked out the entire setup, and filed patents for his alternating current system. Shortly later, a Pittsburgh businessman named George Westinghouse, who had grown rich by inventing an air brake system for railroad locomotives, approached Tesla with an offer: he would give Tesla $5,000 in cash and $55,000 in Westinghouse Corporation stock, plus $2.50 for every horsepower of generating capacity sold, in exchange for full ownership of Tesla’s patents. Tesla took the deal–and promptly spent half the money building himself a new laboratory.

Westinghouse immediately began building generating plants using AC power. He was particularly successful in suburban and rural areas where Edison’s DC system could not transmit electricity for long distances but his high-voltage AC system could. By 1887, Westinghouse had almost one-third of the electric-generation market, and Edison was forced to defend his turf. The resulting conflict became known in the press as “The Current War”, and it was fought on the technological, political, and personal level.

Edison knew that the Tesla/Westinghouse AC system was technologically better than his DC system, so he fought back using the only real advantage he had–DC operated at much lower voltages and was therefore much safer than high-voltage AC. To demonstrate the dangers of high-voltage electricity (and thereby convince people to buy his low-voltage DC system instead), Edison began sponsoring a series of public demonstrations in which stray dogs were placed on metal plates on the floor and then zapped with high-voltage AC current–killing them spectacularly. Over time, the electrocution victims (Edison made a point of calling it “Westinghousing” them) grew to include pigs, then horses, cows, and once, in New York City, an Asian elephant named Topsy, who had killed three different keepers and was considered by the local circus to be too dangerous to work with. Topsy had copper electrodes fitted to her feet, was zapped with 6,000 volts of AC power, and fell over stone dead. Edison’s movie company filmed the whole thing, and Edison cinemas made sure everyone saw it.

During this time, Edison happened to receive a letter from a dentist in Buffalo who had an idea for a way of humanely executing criminals–by electrocuting them. Edison was personally against the death penalty, but he recognized the opportunity this gave to tie Westinghouse’s “dangerous” AC system to something that was unpleasant in the public’s mind. He began to quietly lobby state governments to use electricity to execute criminals–using high-voltage AC power. “The most effective of these,” he helpfully pointed out to the State of New York, “are known as ‘alternating machines,’ manufactured principally in this country by Mr. George Westinghouse, Pittsburgh.” New York took the bait–it constructed an electric chair powered by an AC generator, and on August 6, 1890, used it to execute convicted axe murderer William Kemmler. Kemmler flopped around like a doll when the current was applied, it took two bursts of electricity to kill him, and the stench of burned flesh permeated the room. Reporters were horrified. “An awful spectacle!” one newspaper headline screamed.

Westinghouse knew what Edison was trying to do, fought back in the press, and even went so far as to contribute $100,000 to Kemmler’s legal defense, hoping to avoid the execution. Tesla, meanwhile, was also speaking out to the press to defend his AC system, declaring it to be safe if it was used properly.

In the end, despite Edison’s propaganda campaign and his dirty tricks, Tesla and Westinghouse won the war. The AC system simply was technologically superior to Edison’s DC. When the World’s Fair was being planned for Chicago in 1893, the organizers decided they wanted a spectacular display of electric lighting, and, although Edison was invited to set up a demonstration area, it was Westinghouse they turned to for the most stunning display. On May 1, President Grover Cleveland himself ceremonially pushed a button, and thousands of electric bulbs flashed to life, powered by 12 Tesla AC generators. The “City of Light”, designed by Tesla, demonstrated the superiority of AC power; other demonstrations by Tesla, in which he lit up electric lamps by passing the current through his own body, demonstrated its safety. Three years later, in 1896, the Niagara Falls Power Company used hydroelectric power generated by the Falls to run an AC system for the city of Buffalo. Westinghouse’s AC generators soon captured 80% of all American power-producing capacity. Within a few years, Edison’s own company, General Electric, adopted AC and began producing its own systems (Edison’s objections were brushed aside by GE’s President and its Board of Directors). DC power systems disappeared, and the Current Wars were over.