OK, most people don’t like spiders.  Especially the big ones. But spiders play an important role in our ecosystem. Many of them have fascinating lifestyles and habits. And despite their large size, gigantic webs and fearsome appearance, Florida’s orb-weaving spiders are harmless to humans

Anyone who has ever spent some time roaming in Wild Florida has likely had the experience of walking along, minding your own business, and suddenly feeling a silken web pressing against your face like a volleyball net. Congratulations–you just met one of our orb-weaver spiders.

With its tropical climate and its abundance of insect life, Florida is spider heaven. We have hundreds of known species, and probably hundreds more that have not yet been studied and scientifically described. During the day, you are likely to see some of our Jumping Spiders–little metallic-looking things with two big eyes that watch you curiously. Jumpers are believed to be among the most intelligent of spiders. At night, you may also see some Wolf Spiders–big hairy things with green-glowing eyes. Like Jumping Spiders, Wolf Spiders don’t make webs, but wander around in search of prey. In springtime, male Wolf Spiders, looking for females, often wander inside houses, where they sometimes fall into the sink or the bathtub and can’t climb back out, scaring the bejesus out of the homeowner in the morning.

(One thing we do not have in Florida, despite the beliefs of some people, are tarantulas. Although there are a number of tropical tarantula species found in the Caribbean Islands, none of them occur naturally in Florida.)

By far the biggest and most conspicuous of our native spiders are the orb-weavers, which make enormous webs, some stretching as far as seven or eight feet, to catch insects. They are particularly partial to making their webs across pathways and trails, which is where most people encounter them.

There are two kinds of large orb-weaving spiders that you are likely to see in Florida. The first is the Golden-Silk Orb Weaver, Nephila clavipes. 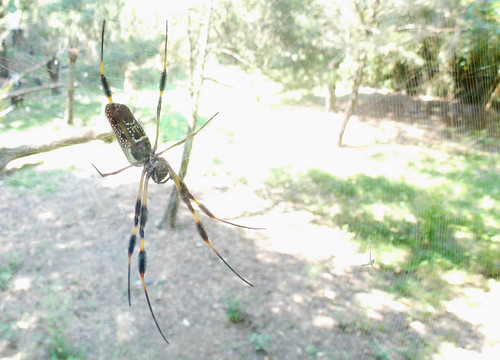 Nephila is a tropical genus with members found virtually around the world. The N. clavipes species is the only member of the genus found in the New World–it ranges from South America through Florida and Georgia and into the Carolinas.

In 2011, an exquisitely preserved fossil spider, encased in volcanic ash, was found in Mongolia belonging to this genus, dating back over 165 million years ago. Named Nephila jurassica, it had a legspan of six inches, making it one of the largest fossil spiders ever found.

Today’s Golden-Silk Orb Weaver measures around an inch and a half in body length, with a legspan of about three inches, making it one of the largest spiders in Florida. Some of the local names for them are “Wood Spider” and “Banana Spider”. The males have duller colors and are very much smaller–less than one-fifth as big as the female. It’s not uncommon to see three or four tiny males living on the female’s web, where they feed on her stashed prey and hope for a chance to mate. The female then produces an eggsac from silk, containing over 200 eggs, then dies. The eggs overwinter in the sac and hatch in spring.

The webs are huge. The central spiral orb can be three feet across, held in the air by guidelines that often stretch another two or three feet to a tree branch. The silk is a yellowish-white color–it is presumed that the yellow makes the web visible to birds so they don’t accidentally fly into it and destroy the web. Female spiders are often seen perched in the middle of their web, head down, waiting for prey. The silk is strong enough to catch butterflies, dragonflies, and wasps. Unlike other spiders, which take down their web each morning and make a new one each night, the Golden-Silk Orb Weaver leaves its web up, and makes periodic repairs whenever a break occurs.

The second kind of large orb-weaver you are likely to see is the Golden Orb Spider, Argiope aurantia.

The Argiope are another tropical genus with representatives around the world, at least four of them in Florida. The Golden Orb Spider is also known locally as the “Black and Yellow Orb Spider”, the “Garden Spider”, “Writing Spider” and, confusingly, the “Banana Spider”. It matches the Golden-Silk Orb Spider in size, but is heavier in the body and legs and therefore looks bigger.

Like the Nephila, the Golden Orb Spider makes a huge web that usually stretches across walkways or small streams, where insects are likely to fly into it. The web usually contains a conspicuous heavy zigzag, which both acts as a spring to absorb impacts without tearing the web, and serves as a visual signal for birds and mammals so they don’t blunder into the web and destroy it. The web is rebuilt every night. When disturbed, Argiope spiders will often shake their webs violently, turning it into a blur that may hide the spider from predators. Other times, the spider will respond to a threat by falling off its web and hiding among ground litter.