If you’ve been to Florida, then you’ve seen Laughing Gulls. The large raucous flocks with their distinctive high-pitched “laugh” are found virtually everywhere–at the beach, in parking lots, at the parks, wheeling around in the sky–begging for tidbits (and actively stealing food) from tourists. Toss a few french fries on the ground, and you’re likely to be mobbed by dozens. I refer to them affectionately as “sky rats”. 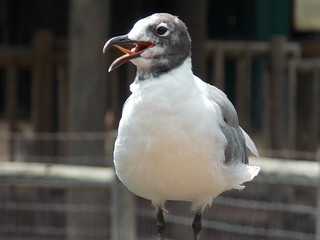 The Laughing Gull, Leucophaeus (formerly Larus) atricilla, can be found along the entire US east coast and Gulf coast, from Canada down to Florida and across to Texas, then down to Venezuela. In the north, the gulls are summer residents and migrate south for the winter; in the south, they stay year-round. They are one of the smaller gull species. Juveniles are various shades of brown and grey. The adult winter plumage includes slate-grey back and wings and a white body, black legs, and red or black beak; during summer breeding season they develop jet-black heads.

Laughing Gulls are colonial breeders and nest once a year, gathering on offshore islands by the hundreds, often in the company of other gulls and shorebirds (and they often raid the other nests to eat the eggs or hatchlings, even of their own species). Both females and males construct the nest on the ground, from grass and other plant materials, and care for the 3-4 nestlings. The eggs incubate for about three weeks, and the fledglings leave the nest after about a month. Juveniles take about three years to reach adulthood. Individual birds can live up to 20 years.

In the late 19th and early 20th centuries, Laughing Gulls were a prime target for egg collectors and were also hunted for their plumage, and the populations dropped in many areas. Their numbers were further reduced in the 1950’s by DDT, which made their eggshells brittle. Since then, they have rebounded and are very common throughout their range.

Like most Gulls, they are omnivorous scavengers and will eat virtually anything that is or once was alive. They can be very clever at stealing food. In Busch Gardens, in Tampa, the Laughing Gulls often wait outside the restaurants for unwary tourists–the birds have learned that when people come outside carrying food trays, they can swoop down, land on the tray, grab what they want and fly off, and because the humans have their hands full they can’t do anything about it. Laughing Gulls can often be seen harassing and annoying other birds, like Pelicans, until they give up their catch. I once saw a group of Laughing Gulls standing around a rolled-up fast food bag in a parking lot with no idea how to get inside it, then a crow came in, unrolled the bag with his beak and  pulled out a half-eaten hamburger–only to be promptly mobbed by the Gulls, who took his burger and flew off with it. Laughing Gulls are virtuoso fliers and are adept at hovering or swooping by to grab food on the wing.

Flocks are loud and raucous, and there are always lots of squabbling and dominance displays going on. The Gulls will often toss their head back while making a short sharp call, which is Gullspeak for “this is mine!”; another display is to hold the head and neck low while giving a loud laugh, which means “Stay away!” When a large food source is discovered, everything usually degenerates quickly into an anarchic free-for-all. But flocks will instantly fall silent and scatter if they see a hawk nearby.

While the tourists (especially the kids) usually love the birds and generously toss them french fries and hamburger rolls, most of the locals consider the Laughing Gull to be a pain in the ass. Large flocks produce large amounts of droppings, which must be scraped away daily. When regularly fed, the birds can also become extraordinarily bold and will take food right out of your hand–whether offered or not. Most outdoor restaurants bear prominent signs saying “Please do not feed the birds!”–others provide their customers with spray bottles full of water to drive the birds away.

One thing is for sure–whether you love the Laughing Gulls or hate them, you certainly can’t miss them.