Launched in June 2003, the Beagle 2 Mars probe was intended to put British science back onto the world’s scientific map, by searching Mars for signs of present or past life. But things didn’t quite turn out as planned . . . 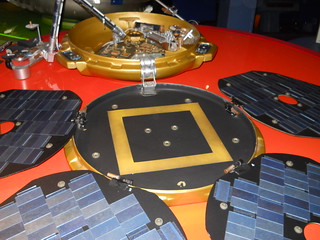 The Mars probe Beagle 2, in the London Museum of Science.

In August 1996, scientists working with NASA announced that they had found the chemical signatures of life in a Martian meteorite known as ALH84001. This finding was later rejected by most scientists, but it sparked an enormous interest in the prospect that life had once existed, and perhaps still does, on Mars.

To help answer that question, a British team of scientists known as the Exobiology Study Group declared that the UK, working with the European Space Agency, should send a probe to Mars to search for chemical signs of possible life. When the ESA reported in 1997 that it would be sending an orbital probe to Mars, called the “Mars Explorer”, Professor Colin Pillinger of the Open University in Britain announced that he would lead a team to design and build a lander that could be carried aboard the Explorer and launched to the surface. It would be named the Beagle 2, after the ship that took Charles Darwin to the Galapagos Islands where he developed his theory of evolution.

To design and build Beagle 2, a public/private consortium was formed, including the Open University, the University of Leicester, University of Wales Aberystwyth, the Astrium European space company, the Martin-Baker Company, and the British companies SciSys and Logica. The budget of 44 million pounds ($80 million) was shared between the British government and the private companies.

In its final design, Beagle 2 looked something like a pocket watch. It was a flattish round disc, about 26 inches in diameter and weighing about 73 pounds. It would be carried as an upper stage of the Mars Explorer, where it would be detached and fall to Mars to soft-land on the surface. A heat shield would protect it from the Martian atmosphere and slow its descent. Just before reaching the surface, a number of gas bags would be inflated, allowing the Beagle 2 to land on the surface, absorb the impact, and bounce to a stop. Once on the ground, the Beagle 2 would open up, allowing its four round solar panels to unfold like petals and begin powering the instruments.  Beagle 2 had an onboard gas chromatograph and mass spectrometer, and could collect samples with its robotic arm. The landing was planned for an area of Mars known as Isidis Planitia, a flat plain located near the Martian Highlands which exhibited features that may have been made by liquid water. Designed to operate for as long as a full Martian year (687 Earth days), Beagle 2 would serve as a link to a series of new orbiters that were planned as follow-ups to the Mars Explorer. Launch was planned for June 2003, using a Russian Soyuz FG rocket launched from Baikonur Cosmodrome. The landing on Mars was planned for Christmas Day.

The previous history of expeditions to Mars, alas, was not encouraging. About half of the various unmanned probes and landers sent to study Mars, could not complete their missions. The Soviet probes Phobos 1 and Phobos 2, both launched in 1988, ceased transmitting while in orbit. In 1992, NASA’s Mars Observer failed as it approached Mars Orbit, and four years later the Russian Mars 96 probe failed to enter orbit. While the NASA Mars Surveyor and Pathfinder missions were a success, other missions in 1998 and 1999 failed, including the Japanese Nozomi probe, and NASA’s Mars Climate Orbiter, Mars Polar Lander, and Deep Space 2. Space journalists began referring to the “Mars Curse” and the “Galactic Ghoul” that ate spacecraft approaching Mars.

When Mars Explorer/Beagle 2 launched on June 2, 2003, things went smoothly. The probe reached Mars in December, and on December 19, Beagle 2 successfully separated from the Explorer and coasted towards Mars, on course to enter the atmosphere on Christmas Morning. Upon reaching the ground and deploying her solar panels and antenna, Beagle 2 was supposed to make radio contact with NASA’s Mars Odyssey, then in orbit around Mars. But Beagle never made contact. Throughout January and February 2004, several attempts were made to contact Beagle both from the Odyssey orbiter and from Earth-based stations. All failed. Beagle 2 was declared lost on February 6. It was assumed that something had caused her to crash into the Martian surface and be destroyed.

In December 2005, the Beagle 2 team announced that photographs of the Martian surface taken by NASA’s Mars Global Surveyor appeared to show Beagle 2 intact on the surface at Isidis Planitia, inside a crater, with her solar panels deployed. Subsequent high-resolution photos of the area taken by the Mars Reconnaissance Orbiter, however, revealed this to be just a pattern of shadows. No trace of Beagle 2 has ever been found.

The Mars Express orbiter that carried Beagle to Mars, however, has been a great success, and is still transmitting photos and data from Martian orbit. Mars Express is expected to continue operating at least through 2014.

The duplicate test model of the Beagle 2 is now on display at the Museum of Science in London.

2 thoughts on “The Beagle Hasn’t Landed: The Story of the British Mars Probe “Beagle 2””