The Battle of Sekigahara was a central moment in the history of Japan, establishing the Tokugawa Shogunate that would rule for the next 250 years. 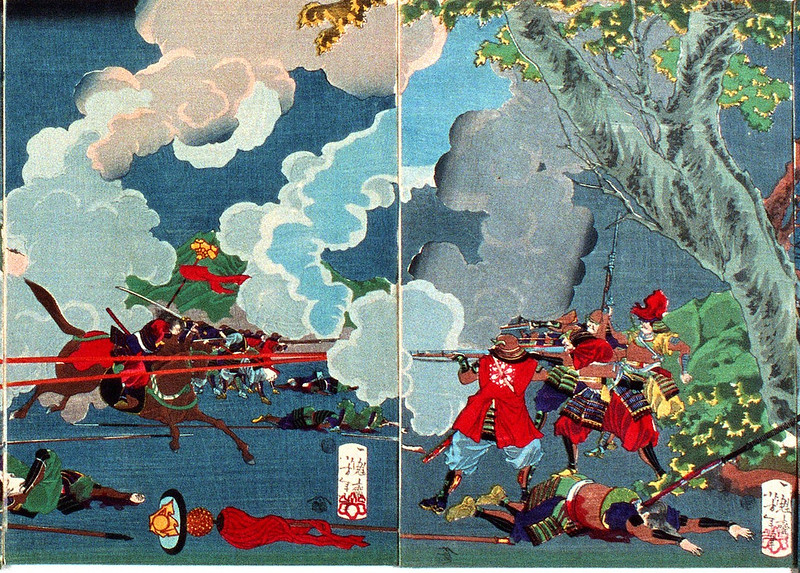 In the 15th and 16th Centuries, Japan was a feudal society, based on rice agriculture. While the titular head of state was the Emperor in Edo (modern-day Tokyo), actual political power rested with the various daimyo, or regional warlords who sent their samurai armies against each other, each hoping to become the predominant unchallenged power in the country. The period became known as the Sengoku, or “Country at War”.

In the midst of this period of unceasing civil war, the Europeans first arrived in Japan, in the form of Portuguese traders in 1543. At first the Portuguese were regarded by the Japanese as mere curiosities. But the Europeans did have one thing that the daimyo were extremely interested in—guns. The matchlock muskets carried by the Portuguese and Spanish represented an enormous leap in military power over the traditional Japanese samurai armies armed with spear and sword. Two daimyo in particular, Oda Nobunaga and Toyotomi Hideyoshi, were interested in obtaining this technology. Currying favor with the European Jesuits, they managed to buy a number of matchlock muskets and set their blacksmith retainers to work making duplicates of them. Soon the technology had spread throughout Japan.

Using their superior skill with these new weapons, as well as intelligent strategy and political maneuvering, Nobunaga managed to conquer or absorb most of the other feudal daimyo under his rule, a process that was then continued by his successor Hideyoshi after Nobunaga was killed by a rebellious general in 1582.

Then in 1598, Hideyoshi became sick. While on his deathbed, he gathered his most trusted daimyo generals and made them all swear an oath to support his five-year old son Hideyori as the ruler of Japan, and they were appointed to serve as regents until young Hideyori became old enough to rule on his own. Hideyoshi died a few months later.

His death sparked a new period of conflict. The daimyo quickly split into two factions. On one side was Ishida Mitsunari, and on the other was Ieyasu Tokugawa. Both claimed to be acting on behalf of the young Hideyori, and in many ways it was simply a conflict between two politically ambitious men, but there was also a political and ideological debate—supporters of Mitsunari were generally in favor of having the government run by civil service bureaucrats, while Tokugawa’s adherents wanted a government run by the military samurai class.

Tokugawa, however, had a reputation as a patient and careful politician who avoided conflict whenever possible and who built up his influence through diplomacy and deal-making. A Japanese fable illustrates the sharp political and personal differences between the “Three Great Unifiers”: Nobunaga, Hideyoshi and Tokugawa were in a room with a caged songbird that wouldn’t sing. Nobunaga threatened, “If the bird doesn’t sing, I will kill it.” Hideyoshi declared, “If the bird doesn’t sing, I will force it to sing.” And Tokugawa softly advised, “If we wait long enough, the bird will sing.”

The conflict between Tokugawa and Mitsunari became heated, however, when Tokugawa moved a samurai army into Osaka Castle, where  Hideyori lived, ostensibly in an effort to protect him. Mitsunari, in turn, launched an unsuccessful assassination attempt against Tokugawa, but Tokugawa, instead of retaliating, attempted to smooth things over with Mitsunari, partly to keep peace within the council of regents and partly because he was shrewd enough to see that Mitsunari was the most impulsive and least effective of the opposing daimyo, and Tokugawa preferred to have him as an opponent rather than someone else.

In 1600, however, another member of the council, Uesugi Kagekatsu, began concentrating a samurai army at Oyama Castle, which bordered Tokugawa’s own province. Tokugawa responded by moving his army to Edo (present-day Tokyo), where he consolidated his own supporters before marching on Oyama. And then the situation escalated. Mitsunari, supported by three of the regents, sent a diplomatic message to Tokugawa accusing him of attempting to usurp power, and first moved his own troops to occupy the Toyotomi castle at Osaka in order to “protect“ Hideyori, then attacked the Tokugawa stronghold at Fushimi. Tokugawa in turn captured Oyama castle on September 1, while Mitsunari advanced further to Ogaki Castle, placing him on the western edge of Tokugawa’s territory.

Mitsunari’s next step would be to take the castles at Gifu and Kiyosu, which would secure the major roadways and allow his samurai to advance against Tokugawa. By the end of September, however, Tokugawa’s forces had recaptured Gifu, and his main army (which became known as the Eastern Army), still at Oyama, split into two and advanced against Mitsunari’s forces (now known as the Western Army), with Tokugawa himself leading one column and his son Hidetada leading the other. After a brief clash at Ogaki, Mitsunari’s Western Army pulled back to a strong defensive position on a hilltop at the end of a valley, near a tiny village called Sekigahara. Tokugawa’s Eastern Army arrived shortly after, and although Hidetada’s column had not yet arrived, Tokugawa saw that he could not wait for it to get there before attacking. Both sides prepared for a battle.

The next morning, October 21, 1600, was foggy. As the two sides strained to see each other, though, they both noticed a third force on a nearby hill. This was Kobayakawa Hideaki, who was nominally an ally of Mitsunari, but who had already been approached by Tokugawa and offered a deal, and was in reality waiting to see how the battle developed so he could join the winning side. Mitsunari had around 120,000 men: Tokugawa had about 75,000.

Tokugawa advanced his samurai up the valley early in the morning, as soon as the fog cleared. The heaviest fighting was on the right side of Tokugawa’s line, where Mitsunari’s own camp was located. At first, the fight was a bloody stalemate, but after a time Mitsunari’s forces began to push the Tokugawas back.

Seeing his chance for victory, Mitsunari sent a messenger to Hideaki, who was still sitting atop his hill unmoving, ordering him to attack. Hideaki refused to move. Now Tokugawa dispatched a small group of men armed with matchlock guns to fire a single volley up the hill in the direction of Hideaki’s troops, which would force the bystanders into the battle on one side or the other. And, in the decisive moment that decided the battle, Hideaki’s samurai charged down the hill and attacked the exposed right side of Mitsunari’s lines. The Army of the West collapsed. Mitsunari fled the battlefield, and was later captured and executed by Tokugawa.

Ieyasu Tokugawa was now in undisputed control of all Japan. To maintain the polite fiction that the Japanese Emperor continued to rule by divine right, Tokugawa had himself awarded the old feudal title of Shogun (“Great Barbarian-Fighting General”) in an Imperial ceremony in Edo. When Ieyasu Tokugawa retired in 1605, his son Hidetada took over the office of Shogun, though Ieyasu remained the real power behind the scenes until his death in 1616. The Tokugawa Shoguns would continue to rule Japan for the next 250 years, until the Meiji Restoration in 1868 removed the dynasty from power and restored the Emperor as the ruler of Japan.

2 thoughts on “The Battle of Sekigahara”