The Duck was one of the most versatile unsung heroes of the Second World War. 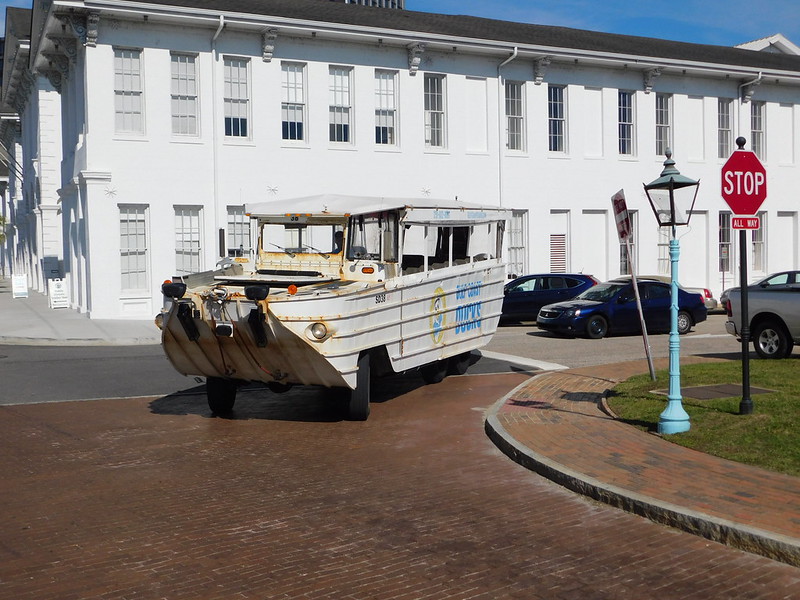 One of the most difficult of all modern military operations is an amphibious landing against a defended beach. But during World War Two, and especially in the island-hopping campaigns of the Pacific War, the Allies found themselves forced to carry out this hazardous task time after time. To deliver troops to the shore, the US developed the Higgins landing craft, which was able to drop a ramp and allow fully-equipped troops to rush onto the beach ready to fight. Larger versions known as LSTs (Landing Ship, Tank) were able to put tanks and other vehicles on shore.

But amphibious landings also required copious amounts of equipment like ammunition, fuel, uniforms, medical supplies, water, and rations. (On average, a single soldier needed at least 30 pounds of supplies each day.) At first, these were simply offloaded at the beach in boxes and laboriously carried inland where they were needed. It was slow and dangerous work. To find something better, in 1942 the US Marines turned to yacht designer Rod Stevens. Accustomed to designing watercraft that were sleek, graceful and fast, Stevens now produced plans for a vehicle that was anything but.

The Duck is basically a standard US Army 2 1/2 ton truck that has been modified to float. By this time, Detroit was already churning out “deuce and a halfs” at the rate of one every three minutes. Working with a team of four engineers from General Motors, Stevens based his idea for an amphibious cargo vehicle around the truck’s reliable engine and all-wheel drive train. The truck body was removed and a sheet-metal hull fitted around the chassis. The propeller was fitted to the drive shaft and a power takeoff mechanism added to allow the driver, using a lever, to switch from land wheels to aquatic propeller. Like its terrestrial cousin, the amphibian would carry two and a half tons of cargo, and would be capable of taking this directly from the supply ships up onto the beach and then inland to the ammunition or fuel dumps. Gauges, valves and an air hose allowed the tire pressure to be adjusted for better traction on loose beach sand as well as on paved roadways. (At first, this had to be done manually: later an internal system was added that fed air from the engine’s compressor.)

In just 38 days, a workable prototype had been produced. It was a boxy straight-sided and ugly-looking thing, and it was known only by its GM project code–DUKW, which indicated “1942 model front-wheel and rear-wheel drive amphibious vehicle”. Perhaps inevitably, it quickly became dubbed the “Duck”.

At first, however, the Army and Marines were skeptical of the odd-looking machine. Only 2000 were built, and none of them figured in the invasion plans then being drawn up. One problem was that the constant exposure to sand and salt water required scrupulous maintenance and lubrication to keep it running. A few Ducks were designated for use in secure rear areas, but they were thought to be too slow and vulnerable to be suitable under fire in actual combat zones. (Naturally, many wags dubbed it the “Sitting Duck”.)

General Motors got its chance to show off the Duck’s capabilities, however, when a Coast Guard ship was stranded during a storm off the New England Coast. When rowboats from shore proved unable to reach the ship in the rough seas, a Duck was sent out and successfully brought back the seven crew members. Now realizing the craft’s capabilities, the Marines formed “Quack Corps” of specially trained Duck units to deliver supplies to shore and then evacuate wounded casualties back to the offshore ships. GM began full production, and delivered Ducks to the American and British military.

The aquatic trucks got their baptism of fire during the July 1943 Allied landings in Sicily. This was a joint American-British effort to establish a base from which to invade Italy and to take Mussolini and his forces out of the war. Almost a thousand Ducks participated in the landing, often carrying squads of troops ashore in rough seas, and keeping them supplied with ammunition and fuel. General Eisenhower enthusiastically reported, “Amphibious truck, two and one-half ton, commonly called DUKW, has been invaluable. Suggest commendation for officer responsible for its development.”

The Duck went on to play a vital role in every major landing after that. At Normandy on D-Day, there were 2000 DUKWs. They carried almost half of all the cargo brought ashore, serving as a crucial supply bridge until the Allies could establish a makeshift port and begin docking supply ships at harbor. When Winston Churchill, Charles de Gaulle and King George VI all visited the newly-captured Normandy beach, they came by Duck.

In the Pacific, Ducks went ashore at Saipan, Iwo Jima and Okinawa. On the tiny Japanese-held islands, there were no harbor facilities, so virtually the entire supply chain was dependent on the Ducks. This was particularly difficult at Iwo Jima, where the island’s soft volcanic ash presented a challenge even to vehicles that had been designed to deal with it: to gain sufficient traction and avoid getting stuck on the soft beaches, Duck drivers had to lower their tire pressure to a mere five pounds. Losses were heavy.

Today, there are still a handful of World War II DUKWs in service, but not with the military. In several seaside resort towns, excursion companies now take tourists on jaunts in authentic war-surplus Ducks. After touring the sites of the city, these “Duck Tours” then enter the water and become boats, taking visitors on short pleasure cruises.

One of these “Duck Tours” is in Mobile AL. I had already seen tourist DUKWs in Pittsburgh but never got the chance to go out on one, so when the opportunity arose in Mobile I jumped at it. The tour lasted about an hour. It began at Fort Charlotte and went around downtown before splashing into Mobile Bay and sailing past the port, the naval shipyards, and the battleship USS Alabama.