The Boxer Rebellion was the last attempt by Imperial China to expel the European powers and establish an independent China free from Western rule. 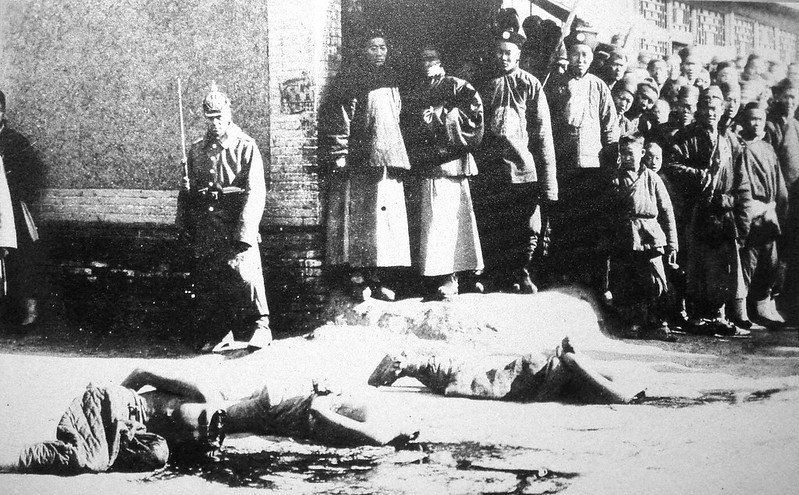 By the first decades of the 1800’s, the ancient kingdom of China had over 400 million inhabitants, making it the most populous country in the world. And to the nations of Europe, locked in a struggle of economic rivalry and commercial expansion (which often turned military), that made China the most desirable untapped market they had ever seen.

But the Chinese Emperors, who viewed themselves as the pinnacle of human technology and civilization (China referred to itself as “The Middle Kingdom”—halfway between Heaven and Earth), had little use for what they saw as uncivilized barbarians. So the Europeans were restricted to the single port city of Canton, where the Emperor could obtain the trade goods he wanted while limiting the inflow of Western influence.

The military might of the West, however, was overwhelming: beginning with the Opium Wars, the Europeans (shortly afterwards joined by Japan and then Americans) seized control of most of the port cities and forced a series of concessions from the Emperors. Now just a prostrate and helpless giant, China was carved up by foreigners eager to plunder the corpse. They were accompanied by Christian missionaries who brought Western religion, education, and political ideology to China. By the end of the 19th century, traditional Chinese society was very close to disappearing entirely.

In 1898, Shantung Province was wracked by two natural phenomena that had always plagued China: floods, followed by drought. Crops failed, and peasants starved. It was in this atmosphere of desperation that a new social movement appeared and quickly spread. Known as I-ho-ch’uan (“United Harmonious and Righteous Fists”), it had no real leaders, and consisted of a loosely organized mass of poor rural peasants who were suffering from the collapse of their local agricultural economy. Only their time-honored outlooks united them. In traditional Confucian religion, there was a bargain with the gods: the people of China honored the gods and followed the decrees of the divinely-appointed Son of Heaven (the Emperor), and in exchange the gods provided plentiful crops and prosperity.

But now, the peasantry concluded, that bargain had been broken. In China’s long history, this would usually provoke a peasant uprising which would overthrow the Imperial Court, which was viewed as having lost the Mandate of Heaven, and replace it with a new Dynasty. But at the end of the 19th century, this was made impossible by the iron grip that the foreign powers now held on China.

By allowing the Western barbarians to enter the Kingdom of Heaven and usurp the Emperor’s leadership, the peasantry concluded, China had angered the gods, provoking them into withdrawing their favor and protection. And there was, the Boxers preached, only one way to restore the goodwill of the gods—by removing the Westerners and all of their poisonous influence.

It was an explosive mix of religion, nationalist politics, and economics. Lacking weapons, the rebellious peasants armed themselves with farm tools, wooden sticks and staffs, or their own empty fists (taking the name “Boxers” from their training in kung fu). They recruited new members through complicated religious rituals which, they declared, allowed their bodies to be inhabited by the spirits of the gods and which made them divinely impervious to Western bullets.

By 1900, bands of Boxers were already active in the northern provinces, targeting Europeans and attacking Christian churches—burning them to the ground and killing both the Western missionaries and their Chinese converts. The movement quickly spread and grew, and made its way towards Beijing, expanding its targets to schools, shops, houses, railroad stations, and anything else that was owned by foreigners or by westernized Chinese. Although the Westerners in China, panicked by the violence leveled against them, screeched in the press that the Boxers were terrorists who killed indiscriminately, the reality was that the upheaval was targeted very specifically and deliberately, and had a specific goal in mind—to drive “foreign influence” out of China.

When Europeans turned to the regional Chinese governors for protection, they found instead that most of these were supporting the goals of the Boxers. In Beijing, the Empress Dowager Tsu Hzi, who ruled in the name of the young Emperor, had also concluded that China would never be independent again unless all of the foreigners in the country were expelled, and, though making no public statements concerning the rebellion, she pointedly refused to order her army against the Boxers.

By May 1900, most of the remaining Westerners in China had been driven to the capitol and were crowded into the “foreign quarter” of Beijing, behind stone walls and the 500 military embassy honor guards which could provide some protection. Once, these neighborhoods had been the site of opulent homes and gardens for Western diplomats (where signs reading “No dogs or Chinese allowed” were a common sight). Now they were the scene of terror and desperation as thousands of European and westernized Chinese refugees crowded in to escape the Boxer mobs. Consuls and ambassadors frantically sent messages home asking for military forces to protect and defend them. Troops and ships began arriving at the port of Tientsin, 100 miles from Beijing, from England, France, Russia, America and Japan. They were all placed under the unified command of British Admiral Edward Seymour.

Now the Empress Dowager decided to act. She considered the arrival of foreign troops as an invasion, and on June 19 she ordered her own army into action against them. China was now at war with most of the Western world. An immense army of 20,000 Boxers and Imperial troops surrounded the Foreign Quarter and laid siege. The Empress Dowager demanded that all of the foreigners in Beijing depart China by the next afternoon, but with all the city’s gates controlled by the Boxers, none of them could leave their compound without risking death from the mob. They all gathered inside the walls of the British Legate, which was the most defensible building. The Chinese opened fire with cannon.

Meanwhile, a force of Boxers and Imperial troops went out to meet the Western military forces under Admiral Seymour, now approaching from Tientsin, and drove them back to the port city. Upon hearing the news, the Empress Dowager was said to have remarked, “The foreigners are now like fish in a cooking pan”. It looked like the Boxers were on the brink of victory.

In mid-July, news reports began appearing in European capitols that Beijing’s diplomatic buildings had been taken by the Boxers and all of the occupants executed. As it turned out, the report was false, but it goaded the West into action. The German Kaiser Wilhelm mobilized 30,000 troops to go to China; in the US, President McKinley sent troops from the Philippines, under General Adna Chaffee. In all, over 20,000 troops from eight countries gathered at the port of Tientsin. Originally, they thought they were on a mission to simply retake the compound and recover the massacred bodies, and they dawdled for three weeks getting organized and receiving supplies. But when word came in August that the previous reports were incorrect and that some 3000 people were still besieged inside the British Legation, they set out for Beijing.

After a ten-day running battle with the Boxers, the Western troops reached Beijing on the night of August 12. Although the Chinese troops outnumbered them by at least three to one, the poorly-equipped Chinese were unable to stand against the heavily-armed Westerners, and after a brief combat which killed thousands, the Boxers melted away. The rebellion died with them, and European troops entered the city.

In a desperate attempt to save herself, the Empress Dowager ordered her troops to join with the Westerners and to round up the Boxers, while she herself fled to the countryside. Thousands of Boxers were arrested and executed. The Emperor’s Palace in the Forbidden City became the headquarters of the German commander, and the rest of the city was looted and burned. In all, at least 30,000 Chinese had been killed in the six-month uprising.

China was forced to sign a treaty which placed the country’s capitol under virtual occupation. A payment of over $300 million in silver was extracted to cover the costs of the war.

Two years later, the Empress Dowager Tsu Hzi returned to Beijing, but she was now only a powerless figurehead. China was firmly ruled by the foreigners. Europeans and Americans would finance the westernization of the country, as traders and missionaries once again flooded into the port cities. In 1912, a revolution led by Sun Yat-Sen overthrew the remaining residue of the Imperial Government, China became a Republic, and the Chinese Empire came to an inglorious end.

One thought on “The Boxer Rebellion”