There is a good possibility that Mancala is the oldest-known board game ever played by humans. 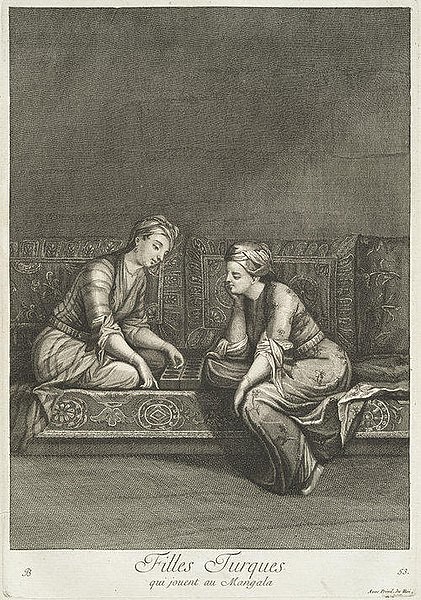 Mancala is a board game from Africa. Its suspected history stretches back several thousand years, but because of the game’s simple construction—it can be played using nothing more than some beans and some holes scooped in the ground—it is possible that some version of this game was being played by people thousands of years before the first “cities” or “civilizations” ever appeared, and no trace of it would ever appear in the archaeological record. Since the premise of the game is based on planting seeds in a garden or field, it is plausible that Mancala may have appeared at roughly the same time as human agriculture itself, at least 12,000 years ago and perhaps as long as 20,000 years.

The earliest actual evidence for Mancala, however, is sketchy, which is not surprising given the ephemeral nature of the game material. A row of pits chiseled into a stone slab in western Iran, dating to around 6300 BCE, may have been part of a Mancala board (or they may have just been a series of holes).  Similar pits have been found in Beidha in Jordan, dated to 5900 BCE, and in Ain Ghazal at 5800 BCE, which have also been interpreted as Mancala gameboards. Recognizable double rows of Mancala pits have been found carved into Egyptian temples, but while the temple may be old it is not clear that the carved gameboard is—it could easily have been done by a visitor from the Roman Era or even later. In Phoenicia, archaeologists found two rows of five holes carved into a piece of marble from the back of a broken statue from the 6th century BCE, which has been attributed as a Mancala board—though this was found inside a 2nd century CE Roman house as part of a plumbing system and may have been carved much later. Other researchers who were excavating a Roman bathhouse in the Judean city of Gedera, also dating to the 2nd century CE, found what they have concluded are Mancala boards, molded into a glazed ceramic or carved into stone slabs. There is a brief mention in a 9th century CE Arabic manuscript of a game which might be Mancala, but it is rather ambiguous.

But despite the game’s potential antiquity, the earliest unmistakable evidence that we have of the game’s existence comes from the 15th century CE, when the Orthodox Christian monk Giyorgis of Segla, living in Ethiopia, mentions (in a book titled Mysteries of Heaven and Earth) a local game he calls “Qarqis” which sounds like a version of Mancala. By this time the game had likely already spread to most of Africa, and Muslim Arab traders (who called it “Naqala”, from which we get the modern name “Mancala”) in particular adopted the game and spread it overseas to India and Southeast Asia. Finally, West Africans who were taken to the New World as slaves after 1492 carried the game along with them.

Unlike other African and Arab derived games such as Alquerque (Al Quirqut), there are no clear records of Mancala being taken from the Holy Land to Europe during the Crusades, or being introduced by Islamic Moors into Spain. This has been taken by some to indicate that Mancala had not actually reached the Arab world by this time and was still confined to Africa. Mancala had certainly reached Europe by the 17th century though and there are some records of it in England and Germany, but for some reason it never gained popularity in that continent. Renaissance Europeans seemed to prefer Chess and Backgammon instead.

Mancala has been fashionable in the rest of the world for centuries, though, under a bewildering variety of versions and names. In eastern Africa, Mancala is known as “Bao”; in west Africa it is “Oware” (the name means “married”, and comes from the legend of a man and woman who played many games together, and eventually were married so they could finish their games). In Ethiopia it gained the name “Gebeta”, and “Tchouba” in Mozambique. In the central Asian Muslim regions it is known as “Toguz”, and in Islamic areas of India it is “Ali Guli Mane”. There are many versions in Asia: in Malaysia it is “Congkak”, in Indonesia the game is called “Dakon”, and in the Philippines it is “Sungka”. In the Muslim areas of Bosnia, Mancala is known as “Ban-Ban”. In all, at least 800 named forms of Mancala are found worldwide. All of these use the same basic rules, but may differ in the number of pieces and in the layout of the board.

In 1940, the game’s popularity in the English-speaking world received a boost when William Julius Champion Jr took the variation of Mancala being played by African-American and Caribbean-American communities in Louisiana, known locally as “Warra”, modified it a bit, and published it commercially under the name “Kalah”. Champion’s version of 12 holes and 72 seeds is now accepted as the “standard” (at least in the US), and most English-language references to “Mancala” are to this variation.

If you would like to try out the oldest game in the world(?), here is a rule set for a smaller version of Mancala. All you need are six small bowls or shallow cups and a handful of beads, beans, buttons, pebbles, or any other small objects. It does not matter what color(s) the objects are.

There are endless variations of Mancala, with widely-ranging numbers of pits, seeds, and even the number of rows. The version here is a simple edition using just 6 pits and 24 seeds.

Four seed markers are placed in each of the six pits on the game board. (For a shorter game, you can use three seeds in each pit instead.) The pits are arranged in two rows of three, like this:

Player One selects one of the three pits on his side of the board (you may not move pieces located on your Opponent’s side of the board) and removes all of the seeds from it. He then places one seed into each succeeding pit sequentially, moving towards the right (counterclockwise). If he reaches his storage bank off the end of the board at his right, he deposits one seed there and counts that as a space, then continues counterclockwise along his Opponent’s row of pits. If he reaches his opponent’s storage bank at the other end of the board, however, he skips over it, does not deposit a seed, and does not count it as a space, but continues down along his own row of pits.

Once the player has deposited all the seeds in his hand sequentially into as many pits as he can, his turn is over. If the Player deposits the last seed from a hand into his own storage bank by an exact count, however, he gets to move again.

If on the other hand a Player deposits his last seed into an empty pit within his own row, he captures any seeds in the pit directly opposite this one in the Opponent’s row. Captured seeds are placed into the Player’s storage bank.

The winner is the one with the most seeds in his storage bank.

One thought on “Mancala: The World’s Oldest Boardgame?”