One of the oddest experiments carried out by the US Army was the short-lived Camel Corps. 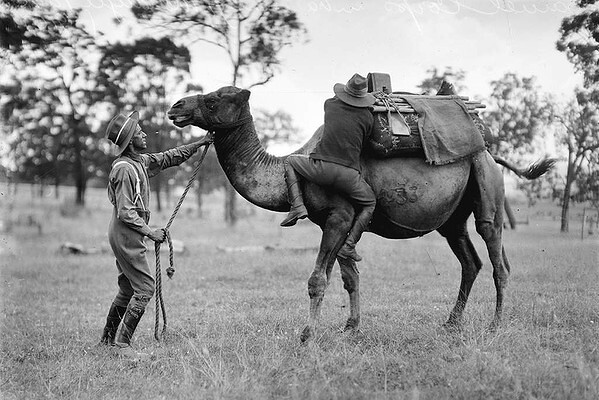 By 1836, the United States was already expanding across the continent. The Louisiana Purchase in 1803 had doubled the size of the US and removed France from most of North America, but now the relentless move westward was bumping up against the Spanish possessions of the southwest, in what is now Texas. This was inhospitable desert land, inhabited by Native Americans and Mexicans who both resented American intrusion. If the US were to ever impose its authority in this area, it might require a sizable military force, but the blazing sun, arid sand, and lack of water or fodder made it impossible for infantry or even cavalry to move around.

In 1836, Major George Crosman suggested what he thought was a good idea to deal with the difficulties—camels. If camels could be used to transport men and materials in the deep Sahara Desert, Crosman reasoned, why would they not work just as well in the deserts of the North American Southwest? “For strength in carrying burdens,” he wrote in his pitch to the War Department, “for patient endurance of labor, and privation of food, water and rest, and in some respects speed also, the camel and dromedary (as the Arabian camel is called) are unrivaled among animals.  The ordinary loads for camels are from seven to nine hundred pounds each, and with these they can travel from thirty to forty miles a day, for many days in succession.  They will go without water, and with but little food, for six or eight days, or it is said even longer.  Their feet are alike well suited for traversing grassy or sandy plains, or rough, rocky hills and paths, and they require no shoeing.” But although Crosman’s proposal traveled up the chain of command, nobody seemed to like the idea, and it was never acted upon.

But it turned up again later.

One of the people that Crosman had written to was then-Senator from Mississippi, Jefferson Davis, who had been on the Senate Committee on Military Affairs. In 1852, Davis was appointed as Secretary of War to President Franklin Pierce. Just a few years before, the United States had fought a long and hard military campaign in Mexico, and although the desert Southwest had been surrendered to the US, the Army was still embroiled in conflict with the Native American nations in the area, especially the Apache. Once again, difficulties with logistics presented themselves: while the lightly-equipped Apache could move around at will, the US Army was dependent on long and vulnerable supply wagons to keep its men and cavalry horses fed and watered.

Secretary of War Davis now recalled the proposal that had been sent to him years earlier to use camels, and revived the idea. “I again invite attention,” he declared, “to the advantages to be anticipated from the use of camels and dromedaries for military and other purposes, and for reasons set forth in my last annual report, recommend that an appropriation be made to introduce a small number of the several varieties of this animal, to test their adaptation to our country.” After three years of wrangling and arguing, Congress finally agreed in 1855 to set aside the sum of $30,000 “in the purchase and importation of camels and dromedaries to be employed for military purposes.”

There was just one problem: nobody in the US Army knew anything about camels. So it was decided that the Army would send Major Henry Wayne of the Quartermaster Department to Europe to talk with zookeepers and military officers who had experience with them (French in northern Africa and British in the Crimea), while Navy Lieutenant David Porter would be dispatched to the Middle East to obtain some camels. Porter turned his ship, the USS Supply, into a virtual floating stable, with stalls for the camels, storage areas for fodder, and a special hoist for bringing the animals aboard. In total, Porter was able to obtain 33 camels and 5 Arab and Turkish caretakers.

After a three-month return voyage, the camels arrived in Texas in May 1856. Another trip in 1857 returned to California with 41 more camels. Once they recovered from their ocean voyage (one camel died en route, but two more were born), the United States Camel Corps was established (unofficially—it was never actually designated as an Army unit) and based at Camp Verde about 60 miles outside of San Antonio TX. At first, things were rough. Camels are at best uncooperative creatures, and with inexperienced handlers they can be stubborn, surly and downright dangerous. They also scared the horses and mules. But over time the Army learned how to handle them.

The Corps’ first assignment came almost immediately: as a test run, the Army sent three mule wagons along with six of its new camels into San Antonio to pick up a load of oats. The mule teams took five days to make the trip and returned with 1800 pounds of oats per cart: the camels on the other hand took only two days and carried a total of 3600 pounds. The War Department considered it a rousing success, and Secretary of War Davis enthusiastically reported to Congress, “These tests fully realize the anticipation entertained of their usefulness in the transportation of military supplies…. Thus far the result is as favorable as the most sanguine could have hoped.”

In March 1857, James Buchanan took office as President, and Jefferson Davis was replaced as Secretary of War by John Floyd. To give the Camel Corps a realistic field test, Floyd assigned it the task of surveying an overland route through the desert for a wagon road that would connect Fort Defiance, in the New Mexico Territory, with the Colorado River in California. The expedition would be led by General Edward Fitzgerald Beale from the California militia—who had no experience with camels. He left in June 1857, with 44 troops, 25 camels, two handlers, and several dozen horses and mules. While the camels were slow at first (they had not been regularly exercised), they were soon outpacing and out-carrying the horses and mules. Beale reported, “It gives me great pleasure to report the entire success of the expedition with the camels so far as I have tried it.  Laboring under all the disadvantages ….we have arrived here without an accident and although we have used the camels every day with heavy packs, have fewer sore backs and disabled ones by far than would have been the case traveling with pack mules.  On starting I packed nearly seven hundred pounds on each camel, which I fear was too heavy a burden for the commencement of so long a journey; they, however, packed it daily until that weight was reduced by our diurnal use of it as forage for our mules.” When the party reached California four months later, Beale was still enthusiastic: “I believe at this time I may speak for every man in our party, when I say that there is not one of them who would not prefer the most indifferent of our camels to four of our best mules.”

The mission was an unqualified success. And in 1858 another camel expedition successfully scouted another wagon trail from Arkansas to California, in a mission that lasted over a year. Floyd made a recommendation to Congress that the Camel Corps be expanded to 1,000 animals.

But with the Civil War looming, Congress never took the matter up. When war broke out in 1861, the Union Army had about half of the camels in California, and the Confederates held the other half in Camp Verde. Despite the fact that Jefferson Davis was now the President of the Confederacy, neither side made any use of the animals, though one of them, named “Douglas” somehow ended up in Vicksburg, where he was killed by a Federal sniper during the siege.

When the war ended, the Army decided to disband the Corps and sell all the surviving camels. Some went to zoos, some became circus performers, some became children’s rides in fairs and carnivals, and some were simply released into the desert. One was reportedly run over by a train in Arizona in 1901. According to local lore, the last of the Army camels lived in Griffith Park, in Los Angeles, until it died in 1934, though there are still occasional reports even today of wild camels living in the remote desert—perhaps descendants of the Army’s abandoned experiment.

5 thoughts on “The US Army Camel Corps”