The first African-American military unit to be organized in the Civil War was on the side of the Confederacy. But they were not slaves—they were free volunteers. 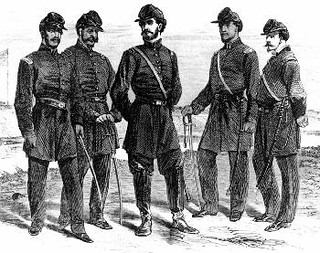 When the state of Louisiana seceded in January 1961, it found itself in an important and strategic position. Once the Federal Government realized that the war would not be a quick and easy one, Union commanders formulated a grand strategy to choke off the South, cut off its trade and supply lines, and starve it into submission. Called “The Anaconda Plan”, it involved the blockade of every major Confederate seaport on the Atlantic and Caribbean coasts and the capture of the Mississippi River ports—and the most important of these was New Orleans.

With a population of 167,000, New Orleans was the sixth-largest city in the US, the biggest in the South, and the Confederacy’s most important port. Everyone knew that it would be one of the first places targeted by the Federal blockade.

But New Orleans was fundamentally different than the rest of the South. Here the economy was based on trade, particularly in sugar—of which over three-fourths was sold to the Northern cities.  These close economic ties to the North meant that New Orleans had been largely anti-secessionist in its views, and although the city was staunchly pro-slavery, its representatives had also voted against leaving the Union.

The local French culture was also much more racially tolerant than the rest of the Confederacy, and though the sugar plantations depended upon slave labor just as the Southern cotton plantations did, French Cajun masters who produced mixed-race offspring with their slaves would often free them and accept them as their own. Thus, while about 15% of the city’s population was African-American, almost 11,000 of these were “free people of color”. Although they did not enjoy full citizenship rights—they could not vote and could not serve on juries—they were not slaves, but were free to run their own businesses and to buy, sell and own property. Indeed, while many of these free people of color were artisans and skilled craftsmen, some were themselves slave-owners who made their living by running cane plantations which supplied the sugar trade. They were also free to marry into the French Cajun community, and around three-fourths of the free African-Americans in the entire state were legally classified as mixed-race “mulatto” rather than “Black”.

Another important difference was that Louisiana was the only state in the Confederacy (or the Union, for that matter) to allow free people of color to serve in the state militia. This tradition went all the way back to the War of 1812, when local African-Americans had been recruited as part of General Andrew Jackson’s hodge-podge collection of soldiers and citizens who had successfully beaten off the British when they attacked the city in 1815.

Once Louisiana seceded and joined the Confederacy, there was not much question that Federal troops and naval forces would soon be on the way, and so on April 17, 1861, Louisiana’s Confederate Governor Thomas Overton Moore called for local militias to be organized and armed in order to defend against a probable Union invasion.

In response, the social elite amongst the city’s free people of color met at the New Orleans Catholic Institute and organized a regiment of their own, the 1st Louisiana Native Guard, with 1100 volunteers. The Native Guard promptly offered its services to the Governor, swearing an oath to defend the city against “the pollution of a ruthless invader”. Governor Moore accepted them into the state militia and on May 29, in accordance with Louisiana law, he appointed three local white men as the senior regimental officers, although all of the troops and junior officers were French-speaking Creole people of color. Like all of the other volunteer militia units, the Guards supplied their own weapons and uniforms at their own expense, but it was the state government’s responsibility to provide them with supplies and rations while in service. In November 1861, when the city held a grand military parade, the African-Americans of the Louisiana Native Guards marched proudly alongside the white militia units.

The rest of the Confederacy, meanwhile, looked on with unalloyed horror. Not only was the entire idea of the secession based on notions of white supremacy, but in a nation where Black slaves outnumbered their white masters by a huge margin and the threat of an armed slave uprising was ever-present, nothing terrified the government more than the sight of African-Americans, even “free” ones, with guns in their hands.

As Louisiana came under increasing pressure from the other Confederate states, the Louisiana Native Guards found themselves sitting on their hands, doing nothing. When a group of Union prisoners that had been captured during the Battle of Bull Run reached the state, the Guards helpfully offered to take custody of them and escort them on their way, but while Governor Moore politely thanked them for the “promptness of their answer to the call”, he declined their services, and they once again sat idly in camp.

In January 1862, the Louisiana legislature amended the requirements for membership in the state militia by adding a single word—“white”. Overnight, the Black 1st Louisiana Native Guards became illegal, and were ordered disbanded. They had never faced an enemy or fired a shot.

By that March, however, the Union had gathered a force of over 10,000 troops under General Benjamin Butler and a naval force under Admiral David Farragut on Ship Island, in the Gulf of Mexico. There was no doubt who they were intended for. So on March 24, 1862, the 1st Louisiana Native Guards were once again reorganized and reactivated in a desperate bid to defend the city. But when Farragut’s ships destroyed the cannon batteries on the Mississippi River and Butler’s troops approached New Orleans, the Confederates were vastly outnumbered. The Army troops under General Mansfield Lovell withdrew from the city without a fight, and the local militias, including the Native Guards, once again disbanded. Butler’s Federals entered the city unopposed on May 1. By the end of the summer, the Union had also captured the state capitol in Baton Rouge.

In 1863, the Federals began moving troops out of Louisiana and deploying them for other campaigns—especially the move against Vicksburg on the Mississippi River. In response, General Butler began to recruit new Union regiments from local supporters—and he found an enthusiastic response among the newly-freed African-American slaves. Eventually Butler would form four regiments—the 1st, 2nd, 3rd and 4th Louisiana Native Guards—from local African-Americans. About ten percent of the original members of the Confederate Native Guards now joined the new versions to fight for the Federals.

At first the Union Army was no more supportive of Black units than the Confederates had been. Some of this was plain ole racial bigotry, while some centered on practical concerns about the ability of poorly-prepared people to fight. In May 1863, Butler sent his African-American regiments to their baptism of fire, as they participated in an assault on Port Hudson as part of the Vicksburg campaign. Like all the previous Union attacks on this Confederate stronghold, this one failed. But with the Black regiments now having demonstrated that they could and would fight, the Union Army began recruiting large numbers of freed slaves. By the end of the war, some 180,000 African-American men would serve in the “United States Colored Troops”, including the pivotal battles of Petersburg, Fort Fisher, and Appomattox.

2 thoughts on “The Black Soldiers of the Confederacy”