One of the first truly global industries was whaling—and it was dominated by the young United States of America. 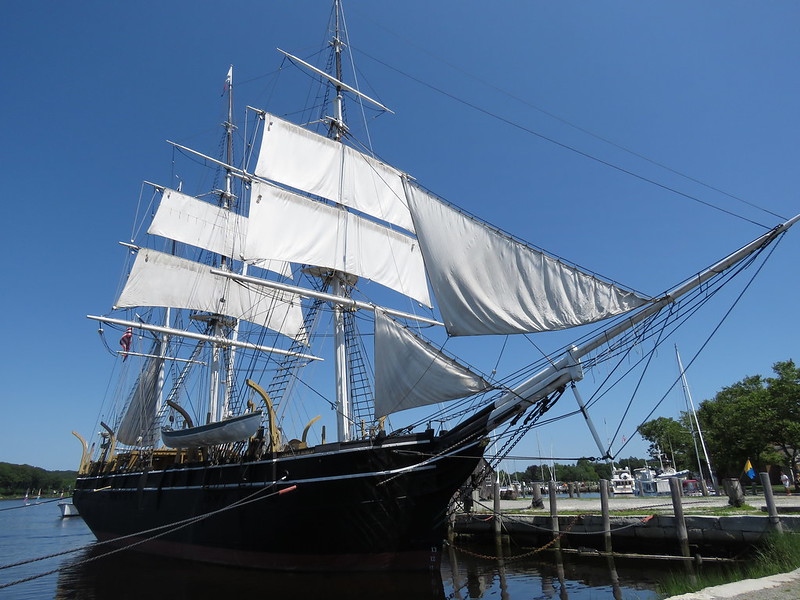 The English colonies in North America had been founded as agricultural resources, and their primary products were tobacco, rice and cotton. But in the northeast, the soil was not well-suited for agriculture, and the economy there was turned towards the sea. Maritime trade with Europe topped the list, followed by fishing.

By the beginning of the 19th century, however, a new industry was beginning to take off. In an age before electricity, most homes were lit by oil lamps, and the best fuel for lamps came from whales. Fortunately for the colonists, the seas off the shores of New York, Connecticut and Massachusetts had plenty of whales. To catch them, wooden towers were constructed along the shore, manned by lookouts. When a whale was spotted, a long rowboat (known as a “whaleboat”) was launched from shore. Armed with iron harpoons and wooden floats, the men would paddle out and drive as many harpoons as they could before the whale could dive away. When the huge animal became exhausted from dragging around the wooden floats, it would surface, and the whalers could kill it with lances, then tow the huge carcass back to shore to be processed.

A dead whale was enormously valuable. Ladies’ fashion of the time required hoop skirts, corsets, and umbrella parasols, and these were made with strips of “whalebone”, fringes of cartilaginous material found in the whale’s mouth which were carefully trimmed out. The thick layer of blubber was cut off in large strips (a process called “flensing”), then sliced into smaller pieces which could be boiled in large iron kettles (known as “try pots”) to render many barrels of whale oil. Finally, if the whalers were lucky enough to catch a Sperm Whale, the large cavity in the whale’s head was filled with a thick waxy substance called “spermaceti”, which could be used to make odorless and bright-burning candles which were far superior to ordinary tallow candles. Every typical household had several different items, from shirt-collar stiffeners to horse buggy whips, that were made from whale products. A single whale could bring in a fortune and keep the entire town supplied for months.

By the 1820s, whale oil became even more important, as the early machinery of the nascent industrial age found a new use for it. Delicate machinery such as lathes, looms or steam engines needed constant lubrication, and whale oil was perfect for the purpose. As the demand for whale products grew, the industry expanded to meet it. And it was the Americans who were in the best position for this. With its rich timber resources and its communities of experienced merchant seamen, New England could build bigger ships and man them more easily than any other country, and soon American whaling vessels were dominating the trade. The enterprising Yankees found a way to take their “try pots” along with them to sea, perched atop large brick furnaces. By allowing the crew to extract whale oil right there aboard ship, the try pots freed them from their dependency on shore, allowing the larger American ships to stay at sea for three years or more at a time, traveling as far as the South Pacific in search of whales and returning with their entire hold stuffed full of barrels containing valuable whale oil. By the 1840s, there were over 700 vessels in the American whaling fleet—and over half came from just one port town: New Bedford CT. It became known as “The City That Lit The World”. As whalers spent more and more time in the Pacific, the new port at San Francisco also became an important commercial center.

The whaling industry was also a source of social innovation. It was a dangerous and risky job, and it bred a feeling of camaraderie and fraternity that was seldom seen in other professions. A significant number of whaling crews—and several captains—were escaped or freed African-American slaves. And since the risks were shared by everyone in the crew, so were the rewards: most whalers were not paid a set wage, but instead contracted for a fixed percentage of the voyage’s proceeds.

When the Civil War broke out, then, whaling was the fourth largest industry in North America, and nearly the entire whaling fleet was based in the North. Whaling ships were, therefore, one of the primary targets for Confederate commerce raiders during the war, and many dozens were sunk or captured.

By the time the Civil War ended in 1865, however, the Yankee whaling industry was already declining. A new and superior product—kerosene—was replacing whale oil as the lamp fuel of choice, while petroleum oil took its place as the best available machine lubricant. New technological innovations were also being made in Norway which gave their whaling fleet the edge in hunting down the already-dwindling supply of whales, including exploding-head harpoons and large iron-hulled “factory ships” that could process slaughtered whales more efficiently than the old wooden ships with their try-pots. By 1895 the American whaling fleet had virtually disappeared, though New Bedford continued to send out a small number of whalers until 1927.

Today, the history of the Yankee whaling industry is celebrated at the Mystic Seaport Museum in Mystic CT. The museum’s centerpiece is the Charles W Morgan, the only remaining wooden whale-ship from the golden age of whaling.

Built in New Bedford and launched in 1841, the Morgan measured 137 feet long and carried a crew of 35. In her eight decades of service she made 37 whaling voyages, most lasting three or four years and taking her to nearly every ocean of the world.

After her last voyage in 1921, the Morgan was purchased as a museum ship by a company called Whaling Enshrined, Inc., which put her on display in Massachusetts. In 1941, the ship was moved to Mystic Seaport. She has been refurbished several times since. In 2014, the Morgan made a goodwill tour of several eastern port cities. She is now on permanent display at the Museum, where she gives educational tours aboard ship and runs a daily whaleboat demonstration.

One thought on “The Yankee Whalers”