Based on a futuristic Nazi design, Dyna-Soar was a failed military attempt to build a space-plane bomber, which ultimately led to the Space Shuttle. 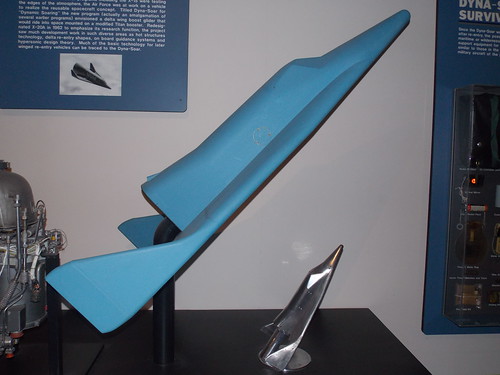 Wind-tunnel test models of Dyna-Soar, on display at the US Air Force Museum, Dayton OH

In the 1930s, the leaders in rocket research were in Germany. The terms of the Treaty of Versailles that had ended the First World War specified that the defeated nation was forbidden from building a military air force, but the treaty terms had overlooked the nascent technology of rocket engines, and when the Nazi regime took power in 1932, they were quick to take advantage. The German Army began sponsoring a team led by Wernher von Braun at a research center called Peenemunde, which would eventually produce the V-2 rocket.

But von Braun was not the only rocket engineer at work in Germany. Eugen Sanger had also been doing theoretical design work in rocketry, but his concept of space travel was different than von Braun’s. The V-2 was a purely ballistic missile: after a brief period of acceleration at liftoff, the space vehicle followed a simple parabolic path that was determined by gravity. Sanger, on the other hand, developed a new concept: he would use a rocket booster to propel his vehicle into space, but his “space plane” would be maneuverable. Using a flat-bottomed shape, the Sanger vehicle would be able to “bounce” off the atmosphere to prolong its flight, much in the same way that a flat stone can skip across the surface of water. And once it re-entered the atmosphere, the space plane could use ordinary flight surfaces to control its descent and fly to a landing point. It became known as the “boost-glide” concept.

At first, Sanger intended his space plane (which he dubbed the “Silverbird”) as a rapid means of global travel—from its launching point, the craft would be able to reach anywhere else on earth within an hour and land there. But when he realized that the Nazi regime had no interest in a civilian transportation system, Sanger modified his scheme to carry weapons. He then submitted a proposal for his “antipodal bomber” to the Wehrmacht.

The German Army rejected the proposal, partly because it already had von Braun working on rocket weapons, and partly because Sanger’s plan required technology that was far out of reach at the time. When Sanger then took his plan to the Luftwaffe, they also turned it down. Sanger’s antipodal bomber design never went anywhere.

At the end of the war, the United States and Britain each tried to obtain as much of the German rocket technology and scientists as they could. Von Braun and his best designers surrendered to the US and were promptly shipped off to New Mexico to continue their research using captured V-2 rockets.

Von Braun’s commanding officer, Walter Dornberger, was captured by the British, but they did not want him for his rocketry skills—they intended to charge him with war crimes for using slave labor from concentration camps to build his V-2’s. After two years in a prison camp, Dornberger was finally released without charges, and went to the US. Here, he approached the US Army with an offer to work on an obscure design he had seen while working at Peenemunde—Sanger’s antipodal bomber.

The Americans were interested in the concept, both as a military weapon to deliver nuclear weapons and as a way to achieve manned space travel (as booster rockets became more powerful, it was realized, eventually it would become possible to send the space plane into orbit and then beyond). By 1954, the Air Force was test-flying the X-15, an experimental rocket-powered airplane that was carried aloft by a heavy bomber and then released to fly to the very edge of space before maneuvering for a landing.

Once the X-15 demonstrated that a manned aircraft could indeed fly into orbit and then re-enter the atmosphere to land under its own control, new projects were begun to expand the concept. These included Bomi (for “Bomber Missile”), Robo (for “Rocket Bomber”) and Hywards (for “Hypersonic Weapon And Research And Development System”). In 1957, these were all consolidated into a single program to develop a hypersonic space plane, which was designated the X-20 Dyna-Soar (for “Dynamic Soaring”).

From the beginning, however, the program had issues—most of them bureaucratic. For starters, nobody seemed quite sure what the Dyna-Soar was supposed to actually do. Some schemes envisioned it as a pure research vehicle, intended solely to help learn about the materials and processes necessary for a returnable space plane. Others wanted to focus the program on producing a space bomber, a space transport, or a space reconnaissance platform.

Dyna-Soar also had competitors, both military and civilian. When NASA was formed, its plan for getting humans into space was Project Mercury, which was a purely ballistic vehicle. The Air Force quickly adapted the follow-up Gemini program for itself, and came up with a concept called the Manned Orbiting Laboratory, which would use modified Gemini spacecraft to perform surveillance (and perhaps bombardment) from space.

The Dyna-Soar plans, meanwhile, were ambitious. The program would be carried out in three phases. In Dyna-Soar I, the mission would be pure research, largely a continuation of the X-15. Wind-tunnel testing had produced a configuration consisting of a delta-winged space plane 35 feet long with a wingspan of 20 feet, with sharply upturned wingtips. By November 1959, Boeing produced a full-scale mockup and had begun work on a prototype (using already-existing rocket engines), and a number of astronauts (including one named Neil Armstrong) had been recruited to fly the Dyna-Soar and were beginning their training in a modified F-5D Stingray fighter, which had flight characteristics similar to those expected in the finished space plane. Once the Dyna-Soar concept had been successfully tested, Phase II would produce a reconnaissance version and Phase III would be a nuclear bomber version. The final version would be Dyna-Soar-MOWS (“Manned Orbital Weapon System”), which would be capable of everything from earth-bombing to reaching orbital space stations to secretly examining Soviet space satellites in orbit.

In the military sense, Dyna-Soar seemed to offer several advantages over both ICBMs and spy satellites. As a bomber, it could reach any point on earth in less than an hour, and unlike a ballistic missile it could be redirected in flight to a new target or even called back entirely. Once it re-entered atmosphere, the Dyna-Soar could approach its target at low altitude, giving it virtually no warning time. And as a reconnaissance platform, the space plane could approach any target from any direction at any time—unlike surveillance satellites with their fixed orbital paths.

The initial test flights would be carried aloft by a B-52 and dropped, and Dyna-Soar’s rocket engines would take it into space. Although the craft was capable of orbital flight, all the missions would be suborbital: the space plane would fly partway around the world, then re-enter the atmosphere and fly to a normal landing on three skids. In later tests, Dyna-Soar would be boosted into space by a series of increasingly more powerful rockets—first the Titan I, then the Titan II. In its final configuration, the system would use the Titan IIIC booster—the space plane would remain attached to the rocket’s third stage and would use this restartable engine to change orbits before detaching for re-entry.

The Phase I Dyna-Soar manned tests were scheduled to begin in March 1964, and a deployable MOWS was scheduled for 1975. But then the hammer fell.

In December 1963, Defense Secretary Robert McNamara cancelled the entire project, concluding that it was an unnecessary duplication of effort by the Manned Orbiting Laboratory. (Ironically, the MOL would itself be cancelled a few years later.)

For the next ten years, the Air Force carried out other projects to test various aspects of the space plane concept. But when NASA began to develop the idea for a reusable Space Shuttle (based partly on the Dyna-Soar research) that would enter earth atmosphere and land as an ordinary glider, the USAF programs were all ended and the Air Force committed to utilizing the Shuttle as its primary method of space access.