The US Federal Interstate Highway System has been called “the greatest public works project in history”. But when the plan was passed in the 1950s, it was promoted as a military contingency program in case of nuclear war. 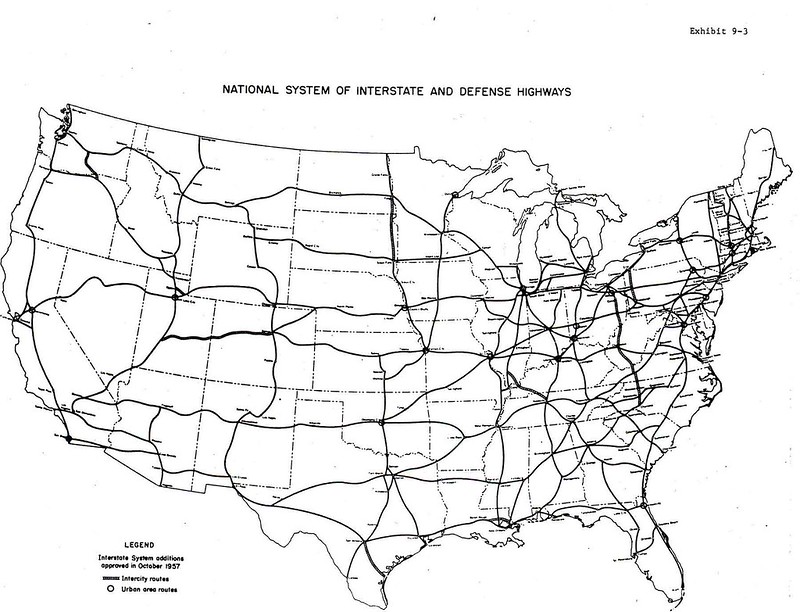 By the end of the 19th century, the United States was still a largely rural nation with an agricultural economy. But in the first years of the 1900s, that changed drastically. Manufacturing industries sprouted in cities along both coasts, and masses of immigrants began to arrive, eager to work in them. A series of railroads crisscrossed the country, carrying freight, consumer products and long-range passengers from city to city. But for most people, “transportation” still consisted of the old-fashioned horse and buggy, riding along unpaved dirt roads. In urban areas, factory workers rode to work on trams or streetcars or, in wealthy cities, subway trains.

Then in 1908, Henry Ford changed the face of America by introducing the Model T automobile. Simple, reliable and so cheap that virtually anyone could afford it, the “Tin Lizzy” made the horse-drawn carriage obsolete virtually overnight. In just 20 years, over 15 million Model T’s had been sold, and America became a nation of car owners.

But the nation’s road system, which had sprung up piecemeal in the horse and buggy age, was not suited for the new reality. Automobiles were faster and heavier than horse carriages, and their rubber tires chewed deep ruts into the dirt roads, and sank axle-deep into the mud if it rained. If the automobile were to be successful as a means of long-distance travel, an entire new network of paved roads had to be constructed.

And that brought up the problem of “who would pay for it?” In the cities, nearly all of the transportation systems were privately-owned, built with invested capital and run for profit. But these streetcar and trolley systems were limited in geographic area; a national road network, by contrast, would need to stretch for thousands of miles, from New York to San Francisco. It was more than any private company (even the biggest and richest like the railroad corporations) could afford. There was only one entity in the US that had the money and resources to carry out such a project—the Federal government.

In 1916, then, Congress passed the Federal Aid Road Act, which earmarked $75 million to be used as matching funds over the next five years towards state-administered efforts to construct a network of paved roads. Shortly afterwards, the US joined the First World War, and the Road Act fell by the wayside. But the Lincoln Highway, which crossed the US, was finished in 1919—the first Federal interstate highway.

But in the “War to End All Wars”, combat and transport became mechanized, and the mechanical truck, tank and ambulance were vital parts of the war effort. And not only at the frontlines: the US war economy was pressed to move huge amounts of war materials from the factories where they were made to the ports where they were shipped to Europe. It demonstrated to everyone that a modern system of paved roads was an urgent necessity.

The Bureau of Public Roads therefore asked the War Department to draw up a map of cross-country routes where new roads were needed to facilitate the movement of military men, equipment, and supplies. The task was delegated to General John “Blackjack” Pershing, who had commanded the US Army in France. The “Pershing Map” plotted out some 20,000 miles, with individual routes connecting cities from north to south as well as east to west. In 1921, Congress passed a new Federal Aid Highway Act, known as the Phipps Act, which allocated $75 million a year for the next five years. Once again, this was used as matching funds for state governments who constructed paved highways.

During the Great Depression, President Franklin Roosevelt used Federal funding to repair roads and build new bridges as part of his Works Progress Administration program, and at the outbreak of the Second World War plans were drawn up for eight federally-funded interstate roads to help with transport of war materials, but for the most part road construction came to a standstill. Congress did pass the Federal-Aid Highway Act of 1944 which authorized the construction of 40,000 miles of highway for wartime use, but did not appropriate any money to pay for it.

World War Two had barely ended when the Cold War began with the Soviet Union, and both sides began stockpiling enough nuclear weapons to blow the entire planet into oblivion. In 1953, Dwight Eisenhower, who had commanded the Allied forces in Europe, took office as President. As a young Army Lieutenant, Eisenhower had taken part in a military convoy that crossed the US along the Lincoln Highway, and as commander in Europe he had seen firsthand the impressive “autobahn” system that the Nazi regime had built in Germany. Recognizing both the military and civilian potential of such a highway network, he proposed a plan to construct a similar interstate grid in the US; not only would it allow efficient movement of people and material from city to city, he argued, but it would serve a vital role in the Cold War by permitting rapid movement of troops and armor during an invasion, and would also allow the quick and effective evacuation of American cities in case of a Soviet nuclear attack. In 1956, Congress passed the Federal-Aid Highway Act authorizing construction of what would become known as the “Dwight D. Eisenhower National System of Interstate and Defense Highways”.

The previous systems of using Federal money to match state budgets for highway construction had proven to be too slow, and so this time Congress decided that the entire network would be paid for by raising the gasoline tax by one cent—from two cents a gallon to three—which would provide $26 billion over the lifetime of the project. The effort would be entirely overseen by the Federal Government, and was mapped out by the Secretary of Defense, former General Motors president Charles Wilson. Original plans called for the completion of 41,000 miles of high-speed four-lane highways running both north/south and east/west, to be finished by 1968. In the end, the project lasted until 1991, and it cost $114 billion. Almost immediately work began on extensions and additions, which tacked on another 7,000 miles, lasted until 2006, and cost another $310 billion.

In 1966, the US Interstate Highway System was designated as a portion of the Pan-American Highway System, a series of highways that were intended to run from Canada through the US and down into Mexico.

The first of the Interstate Highways to be finished was I-80, which ran from Teaneck NJ to San Francisco CA and was completed in August 1986. It was at the time the longest continuous highway in the world, running 3,020 miles. In October 1992, a section of tunnels and bridges for I-70 was completed at Glenwood Canyon in Colorado, marking the finish of all the originally-planned highway network.

But the project was not without controversy. In many cities, the proposed highway routes went right through the poorer sections of town—a deliberate move to enable knocking down “slums” and “depressed areas” and replacing them with newer (and more expensive) neighborhoods. Called “urban renewal”, it quickly became dubbed “Black removal”, and protests broke out all over the country. In some cities, including Memphis, Washington DC, Baltimore, New York and San Francisco, the protesters won: on I-95, I-69, I-70, I-80 and I-83, some sections were re-routed, and some proposed stretches of I-70, I-66 and I-78 were cancelled and remain unbuilt today.

2 thoughts on “The Interstate Highway System”