It is often said that the last invasion of the British Isles was at Hastings in 1066. But that is not quite true. 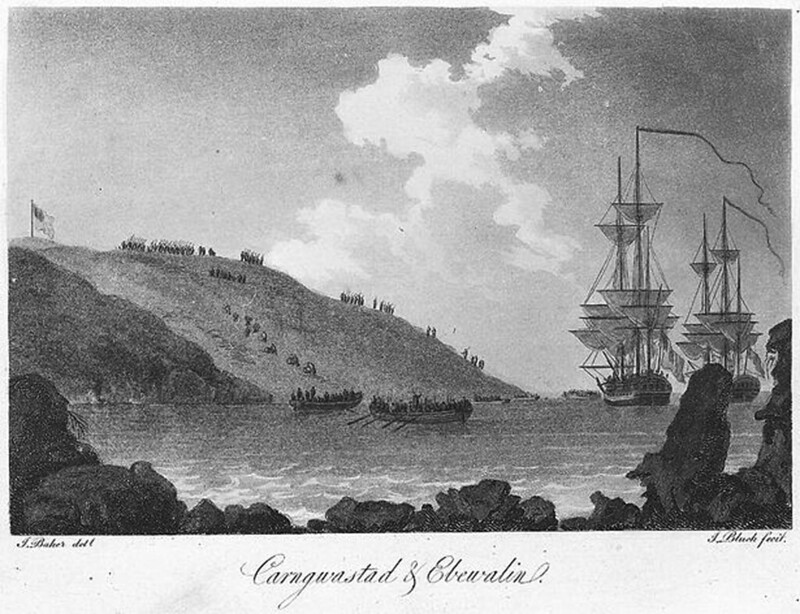 When revolutionaries overthrew King Louis XVI and seized control of France in 1789, the remaining monarchies in Europe looked on with horror. Afraid that the revolutionary fever would spread and infect them too, the royal governments of Britain, Prussia, Austria, and Russia all contemplated directly intervening to halt the French Revolution and restore the King to his throne. The French Republic, led by a committee known as The Directorate, responded with declarations of war. The resulting series of military conflicts became known as the War of the First Coalition.

By 1795, the French Republic’s forces, led by its premiere general Napoleon Bonaparte, had gained control of Spain and Holland, and this opened up a beguiling possibility. After absorbing the Dutch and Spanish fleets, the French Navy had, for one of the few times in its history, gained a numerical advantage over the British Royal Navy and had, for at least the moment, superiority on the sea. And that made it practical to think about crossing the English Channel and invading the British Isles—something that had not been done since the time of William the Conqueror.

The French decided on a three-pronged plan which, they hoped, would take advantage of political divisions within the United Kingdom by recruiting nationalist rebels as allies. The primary thrust would be made by a force of 40,000 troops commanded by General Louis Lazare Hoch that would land in Bantry Bay on the south coast of Ireland. Here, the invaders would be joined by Irish fighters from the Society of United Irishmen group of revolutionary separatists, led by Theobald Wolf Tone. Together, the French troops and the Irish rebels would spark an anti-British rebellion that would capture the island. Ireland could then be used as a base from which to attack England itself.

As a diversion during the operation, two more French forces would be landed in Britain. One of these would place troops led by General Pierre Quantin on shore at Newcastle, and a second would land a force at Bristol, commanded by Colonel William Tate (an American expat). Quantin’s forces were to cause as much havoc as possible in England, while Tate’s troops were intended to make their way to Wales, spark a popular uprising there against English rule, then meet up with Quantin’s troops. Because these operations were only intended to be diversions to draw the Royal Navy away from the real action in Ireland, the Directorate decided not to waste veteran troops on them, and instead they emptied the military prisons and recruited a motley group of discipline problems, thieves, deserters, and criminals who were offered their freedom if they participated in the action. It was known as the Black Legion.

The “invasion” was launched in December 1796. It immediately ran into difficulties. Hoch’s troops, aboard 43 French, Spanish and Dutch ships, sailed from the French port at Brest. But when they entered the English Channel they became separated, and when the rest of the fleet reached Bantry Bay they decided to wait offshore for the rest of the fleet to catch up to them. It was a fatal delay: a furious storm swept in, many of the ships were damaged, and on December 30, after the lost ships finally limped into view, the entire French fleet pulled anchor and retreated to France.

The two diversionary forces, meanwhile, fared no better. Quantin’s force had already left Dunkirk for Newcastle in the last week of November, but ran into the same storms, and turned back. Quantin’s own ship was wrecked, and he had to swim to shore.

Tate’s force, meanwhile, consisting of four ships and 1400 troops from the Black Legion, left Brest on February 16, 1797 and made it through the Channel, but bad weather then prevented them from landing at Bristol. Tate decided instead to make his way straight to Wales, at the town of Fishguard near Cardigan Bay.

On February 22, Tate’s fleet entered the harbor at Fishguard, and were met by the sound of a single cannon shot from shore. This was just a warning intended to alert the local home defense militia (known as the “Fencibles”), but Tate feared for the safety of his ships and directed them to sail to the other side of the bay, where he landed his troops.

The British quickly gathered a force of 190 Fencibles under the command of Lieutenant Colonel Thomas Knox, but when they realized how outnumbered they were, they withdrew. Tate and his 1400 Black Legions swarmed into the town of Fishguard.

Perhaps not unexpectedly, discipline among the motley bunch of Frenchmen broke down quickly. For an entire day, French troops spent their time looting and pillaging, and by that afternoon nearly all of them were rip-roaring drunk. In one incident that is still celebrated today in Fishguard, a local cobbler named Jemima Nicholas, armed only with a pitchfork, rounded up a dozen drunken troopers and confined them in the local church. She became known in local lore as “The Welsh Heroine” and “Jemima the Great”.

It soon became apparent to Tate that his “army” was utterly useless, and so, with rumors of an approaching British militia group hinting at a possible fight (according to one later story, probably untrue, the locals dressed a large number of women in red clothing and marched them in formation in the distance so the French would think they were British redcoats), he abruptly surrendered to town authorities on the afternoon of February 24. It was an ignominious end to the “invasion”.

In 1997, to commemorate the 200th anniversary of the French attempt at conquest, the town of Fishguard commissioned the creation of a “Last Invasion Tapestry”. At one hundred feet long and embroidered in the style of the famous Bayeux Tapestry depicting the invasion of William the Conqueror, the Fishguard textile illustrates the history of the failed invasion. It is on permanent public display at the Fishguard City Hall.