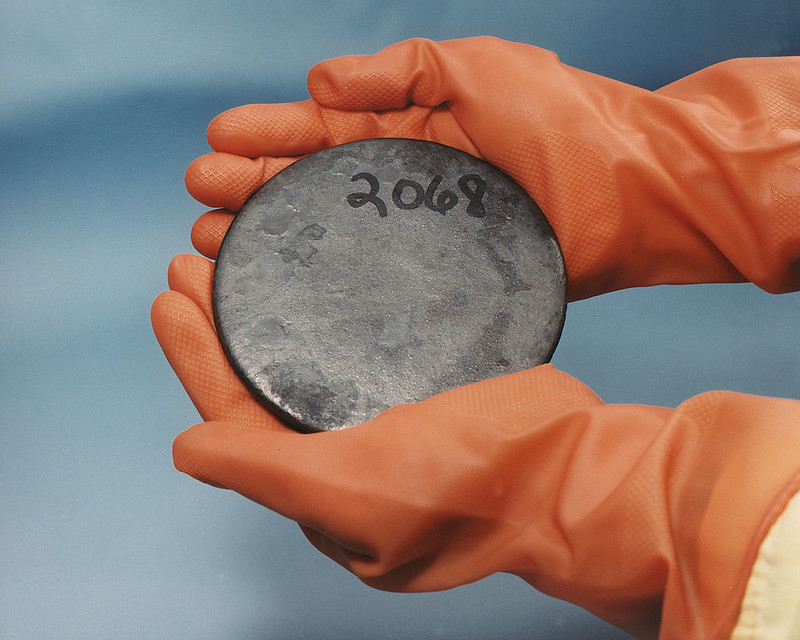 In the 1950s and 1960s, the world fell in love with nuclear energy. While the Cold War raged and threatened humankind with thermonuclear destruction, the “peaceful atom” promised an era of futuristic science where electric power generated by nuclear fission reactors would be plentiful and cheap.

One of the nations that went all-in for nuclear power was France. Dozens of reactors popped up, and soon most of the French population were using electricity that was generated in a nuclear plant. All of these plants operated in basically the same way: when struck by a neutron, an atom of uranium splits in two, or “fissions”, releasing a huge amount of energy. The split uranium atom also releases more neutrons, and if these particles are slowed down by a “moderator” such as graphite or water, they can go on to hit other uranium atoms and split them too, allowing the chain reaction to be self-sustaining. This releases tremendous amounts of heat energy—which can then be tapped to produce steam, and in turn is directed through turbines to generate electricity.

The process of converting natural uranium ore into nuclear reactor fuel is long and complex. Since France had no uranium deposits of its own, all of its uranium fuel was made from ore that had been imported from overseas. And a portion of this came from the African nation of Gabon, which had once been a French colony.

But in May 1970, lab workers in France noticed something odd about some ore samples they were examining. Natural uranium is composed of three “isotopes”, different forms of atoms that all have the same number of protons but differ from each other in the number of neutrons. Uranium-238, with 238 protons and neutrons, is the most abundant form, making up over 99% of all natural uranium, while Uranium-234, with 234 protons and neutrons, is the rarest. But the most important is the isotope Uranium-235, which is used to make nuclear weapons. In ordinary ore, about 0.72 percent of all the uranium will be U-235: in the sample that these lab workers were measuring, however, there was only 0.717 percent. When workers checked other samples that had also come from the same place—in an area of Gabon known as Oklo—they found the same odd discrepancy. Somehow, the U-235 isotope in this particular ore had become very slightly depleted.

The discrepancy was very tiny, but enormously important. As the active component in nuclear weapons, Uranium-235 was one of the most tightly-monitored materials on the planet, and even the most minuscule amounts of it had to be tracked and accounted for to insure that none of it was being diverted for clandestine bomb-making. So the Atomic Energy Commission in Paris, known by its French initials CEA, began an intense investigation to solve the mystery.

At first, they were baffled. Although the various uranium isotopes have different numbers of neutrons, they all have the same number of electrons—and therefore all have the same chemistry. There is no chemical process that can selectively remove U-235 from the ore and change the naturally-occurring ratio.  In order to produce the 90 percent pure U-235 needed for nuclear weapons, bomb-makers had to use a process known as “enrichment” to selectively concentrate the isotope, and that was an enormously complex and expensive process involving centrifuges and magnetic fields. Yet something seemed to have altered the isotope ratios in this ore, ever so slightly, without any human intervention. Further testing demonstrated a similar discrepancy in ore from another mine about 25 miles away from Oklo, known as Bangombe.

Then the mystery deepened even further. Examination revealed the presence of tiny amounts of other elements trapped inside the ore—elements that were produced only as the result of a nuclear fission reaction. There seemed to be no way to explain how this could have occurred naturally in the ore.

The mystery was finally cracked in 1972 when the French found two nearly-forgotten scientific papers that had been published almost two decades before. In 1953, physicists George Wetherill from the University of California and Mark Inghram from the University of Chicago had written a short note that speculated on the possibility that a large natural deposit of uranium ore might, under some very specific conditions, be capable of starting up a fission reaction for at least a short time. Later Paul Kuroda, a chemist at the University of Arkansas, expanded on this idea, concluding that it was theoretically possible if the deposit contained enough U-235 isotope, if it were physically large enough to allow a neutron to impact another U-235 atom before escaping into the surrounding rock, and if there were some moderating material available—such as water—to slow the neutrons. Because it was thought that such a coincidence of circumstances would be impossibly unlikely, these papers were quickly forgotten and dropped into obscurity. But, the French realized, this idea provided the key to explain the odd isotope discrepancy they were now seeing.

The conclusion reached by the CEA was fantastic, and left nuclear physicists with their jaws agape. Roughly two billion years ago, the large uranium-oxide deposits at Oklo and Bangombe had been brought close to the surface by erosion, and lay at a shallow depth underground. (At this time, life on Earth consisted solely of single-celled organisms which lived in the sea.) This allowed groundwater to seep into the cracks and spaces between the rocks, where it acted like a moderator in a nuclear power plant, slowing down the neutrons that passed through it and allowing them to hit the U-235 nuclei around them. Modern uranium ores, with a concentration of U-235 of 0.72 percent, are not able to support such a chain reaction because there is not enough U-235. But, scientists realized, radioactive U-235 decays at a much faster rate than U-238, so it has disappeared more rapidly in the millennia since that time and was, therefore, present at a higher percentage 2 billion years ago—likely around 3%. And that was enough to support a chain reaction. In addition, the abundant U-238 atoms were able to capture some of these neutrons too, which transformed them into the element Plutonium-239. Plutonium also undergoes fission (and is also used to make atomic bombs), and added its own distinct fission products to the mix.

The result was a naturally-occurring uranium-fueled water-moderated nuclear reactor, which produced energy at the very low level of around one hundred kilowatts. Over the next twenty years, until mining at Oklo was ended, 16 different sites were found that demonstrated the signatures of nuclear fission, plus the site at Bangombe. (All of the Oklo sites were mined out and destroyed; only the Bangombe site remains intact.) These are, so far, the only known examples of a spontaneous natural fission reaction.

Then in 2005, further studies gave a clearer picture of how the “Gabon reactor” had operated. A new team of physicists and chemists examined samples from the site and focused on the element xenon, a gas that is produced during nuclear fission and which was trapped inside the ore. By carefully studying the relative levels of the various isotopes of xenon, the team was able to conclude that the fission reaction had lasted for at least two or three hundred thousand years.

But the details were even more interesting. When the first amounts of groundwater entered the uranium ore vein, it was enough to spark off a fission reaction. The water also acted as a coolant, and prevented the uranium in the surrounding rocks from melting. After about half an hour, though, the heat produced by this process (calculated to be about 300 degrees) boiled most of the water away, and without its water moderator, the “reactor” was no longer able to sustain its fissions and therefore shut itself off. After about two and a half hours, though, as more groundwater continued to seep in, the reaction was able to start itself again—only to boil away its moderator after another half-hour and shut down again. And this process continued for perhaps a quarter of a million years, as the reactor periodically shut itself off and then started back up again every three hours, until eventually the combination of  radioactive decay and fissions reduced the level of U-235 below that needed to sustain the reaction. The nuclear furnace then shut down for good, and nearly all of its radioactive by-products decayed away over the next two billion years. Today, all that remains are its tiny remnant of still-decaying long-lived fission products, and the unusually-depleted level of U-235.