Hanukkah, the “Festival of Lights”, has its origin in a Jewish rebellion against the Greeks, centuries before the Roman conquest. 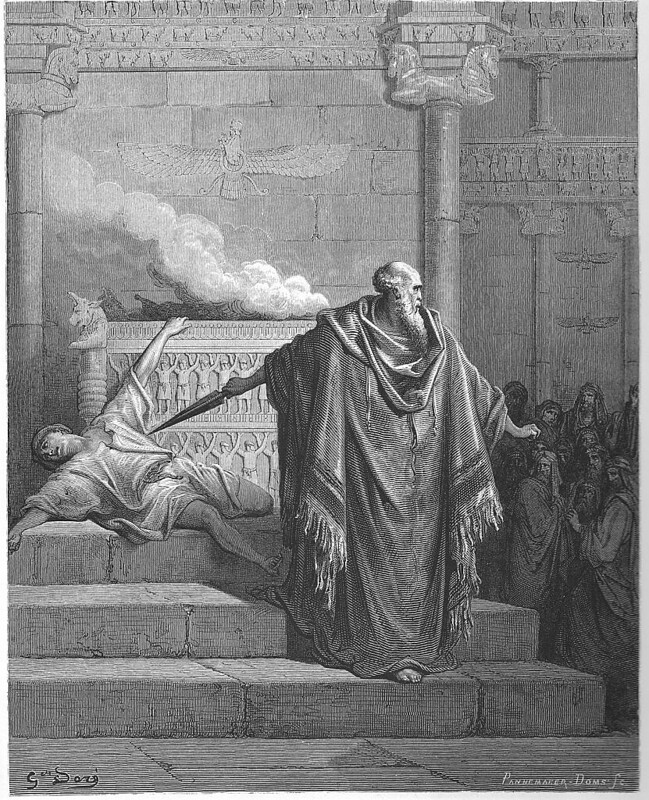 Mattathias in the temple

There are two primary sources for the story of the Maccabean Revolt. The biblical accounts in the 1 and 2 Books of Maccabee are Apocryphal, and focus on the religious aspects of the rebellion. The account given by the Romanized Jew Josephus is more secular, but it also contradicts many of the biblical accounts. And there is precious little in the way of archaeological evidence. So, there is much debate and disagreement over exactly what happened.

What is known is that in 323 BCE Alexander the Great, who ruled an empire stretching from Europe to India, died without an heir, and his realm was subsequently divided into four separate kingdoms, each ruled by one of his generals. In the area that is now Syria, General Seleucus became king. In Egypt, General Ptolemy installed himself as the new Pharaoh.

Between them was Palestine, which contained a small area known as Judea. This was a strategic crossroads, and although the province originally belonged to the Ptolemeic kingdom in Egypt, the Seleucid kings made constant attempts to take it. In 198 BCE, Antiochus III succeeded in conquering Judea and making it a part of the Seleucid kingdom.

In his policies of conquest, Alexander the Great had always practiced a degree of religious and cultural tolerance that was remarkable for the time: subdued people were allowed to keep their native religion and culture, and were often overseen by their own native rules—as long as they gave proper deference to Alexander. For the most part, this course of action was continued by all of Alexander’s successors. But Antiochus III had suffered a military defeat at the hands of the Romans, and now decided that he needed a unified nation behind him. His policy became that of “Hellenization”, requiring all of the different peoples in his empire to adopt Greek culture and religion.

This brought about a sharp rebellion within Judea, where the local Jewish people refused to give up their traditional religion. In the end, Antiochus decided that he could not risk an internal civil war, so he exempted the Jews from his “Hellenization” policy.

But in 176 BCE, Antiochus IV assumed the throne, and he now decided that the best way to resist the growing power of the Romans was to unify Syria and Egypt, and to do that he needed a secure population at home. So once again, the Judeans became the target of “Hellenization”. Many Jewish religious rituals were outlawed, and a statue of Zeus was placed inside the most sacred site in all of Judea—the Temple in Jerusalem.

The biblical account depicts this as mere religious persecution, but it was much more complex than that. Although the Judeans had been exempted from Hellenization, many Jews, especially the educated elite, had voluntarily adopted Greek culture anyway. The majority of people in Judea, however, were rural herders and farmers, and they kept their ancient traditions and refused to assimilate. The resulting tension was almost like a class war, with the poor in the countryside remaining traditionalist, and the wealthy urban elites becoming integrated into the Greek state. It was a recipe for conflict.

The explosion happened in 167 BCE, when a delegation of royal officials arrived in the village of Modiin. The local Jewish leader here was Mattathias, a traditionalist. When the king’s officers demanded that he perform a Greek animal sacrifice in the local Jewish temple, Mattathias refused, and when a Hellenized Jew stepped forward to do it instead, Mattathias killed him, then killed one of the king’s emissaries. Turning to the crowds, Mattathias shouted, “Let everyone who is zealous for the law and who stands by the covenant follow me!”

Retreating to the hills with his followers, Mattathias and his five sons became the leaders of a guerrilla war, which attacked not only the Greek Seleucid officials, but Hellenized Jews who did not follow the traditional religion. Antiochus sent a few army units in to quash the rebellion, but Mattathias, who knew the terrain, was able to ambush them. He earned the moniker “Maccabee” (the Hammer).

When Mattathias died a year later, leadership of the revolt fell to his son Judah (sometimes Romanized as “Judas”). Judah proved to be as adept at guerrilla warfare as his father had been, and the Maccabees soon controlled much of the Judean countryside, and had assembled an army that was equipped and trained on the Greek model. Antiochus now sent 60,000 troops under his best general, Lysias, to crush the rebellion, but, though outnumbered, Judah was able to defeat him with skillful use of terrain.

Then foreign events came to the aid of the Maccabees. The Parthian king Mithridates I invaded Syria, and Antiochus was forced to withdraw his troops to defend his homeland. By 165 BCE, the Maccabees were strong enough to capture Jerusalem. The first thing they did was re-dedicate the Temple, which was partially in ruins. After eight months of rebuilding and ritual cleansing, the Temple was re-opened in December.

According to the Biblical account, the Maccabees could only find one unbroken container of sacred oil for the lamps, enough for just one day. But by divine miracle, the lights burned for eight days until a new supply could be found, and this event is the basis for the modern festival of Hanukkah. But this story is not mentioned in any of the secular accounts and did not appear in rabbinical texts until many years later.

It took another 20 years of revolt and fighting before the Seleucids, now ruled by Lysias who had succeeded Antiochus, finally withdrew from Judea, leaving it in a state of independence.

But the Jewish religion had survived. If Antiochus had been successful in his efforts at Hellenization, it is likely that Judaism would have died out, the history of world religions would be entirely different, and neither Christianity nor Islam would exist today.

8 thoughts on “The Maccabean Revolt”