In 1909, Frenchman Louis Blériot, in his homemade single-wing design, proved the long-range capabilities of the airplane. 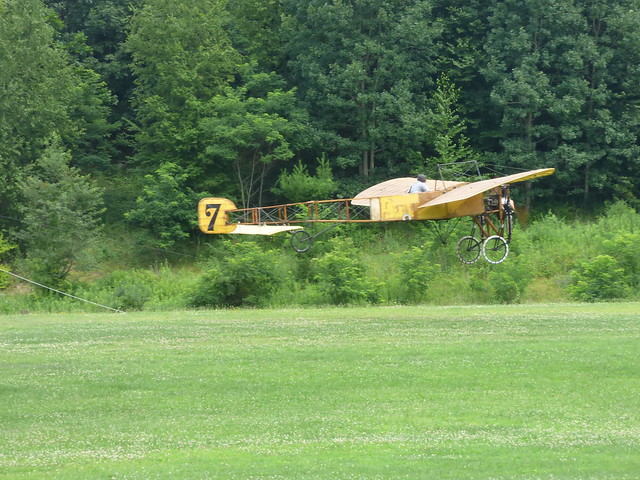 In 1901, a French engineer named Louis Blériot was making a comfortable living manufacturing automobile headlights when he became interested in the challenges of heavier-than-air flight and decided to try his hand at it. His first design had moveable wings that were supposed to flap like those of a bird (a model known as an “ornithopter”). It was an unworkable concept.

By the time the Wright Brothers flew at the end of 1903, France was an active center of aeronautical research, and the news that somebody in America had made a successful flight spurred them to catch up. The first European to successfully fly was Albert Santos-Dumont, whose “14-bis” aeroplane made a 200-foot flight in October 1906. Blériot, in the meantime, had produced a number of designs, each more sophisticated than the last, but had no success until 1908, when his Model VIII got into the air.

Each success was celebrated in the press, but when the Wrights arrived in Paris in 1908 to make a series of demonstration flights, the Europeans were dumbstruck by how far behind they actually were. Over the next year, French designers struggled frantically to produce better and more capable aircraft.

And one of these was Blériot. Working together with Raymond Saulnier, Blériot began work on an improved version of his newest Model X. Dubbed the Model XI, it was, like its predecessor, a mono-wing with the engine mounted at the front and a box-like fuselage made from a canvas-covered wooden frame. The 7-cylinder engine produced 35-horsepower. The Blériot XI made its first flight in January 1909.

Then Blériot made three improvements which were crucial. Inspired by the Wright’s successful ability to maneuver in the air, Blériot fitted the Model XI with his own version of “wing-warping”, using a series of control cables that attached above the cockpit. He also abandoned the flat wooden paddle propeller blades that were being used in Europe and adopted an aerodynamic two-bladed propeller made by Chauvière Intégrale. Although not as efficient as the Wright’s, the new propeller allowed Blériot to get by with a smaller and much more reliable 3-cylinder 25-horsepower engine designed by motorcycle racer Alessandro Azani. By the summer of 1909 Blériot’s Model XI was making flights lasting over half an hour and covering distances of almost 30 miles.

When the London Daily Mail newspaper announced in July a prize of £1,000 for the first successful flight across the English Channel, Blériot found himself one of three pilots who gathered at Calais, on the French coast, vying for the honor: Hubert Latham had brought an Antoinette mono-plane, and the Count de Lambert was equipped with two Wright Model B’s. For several days, bad weather prevented everyone from flying. When the rain finally cleared on the early morning of July 25, Blériot was the first into the air.

Without a compass, Blériot simply pointed his aeroplane towards England, 25 miles away, and set off. Fighting against rough winds, he was blown steadily off-course, but after 36 minutes he came into sight of the chalk cliffs. He landed hard and broke a propeller blade, but he had made it.

Several others had already made longer and further flights, but Blériot’s Channel crossing caught the imagination of the public and became a sensation. His Model XI aeroplane was placed on display in London, then in Paris, and finally found a home in the Paris Museum of Arts and Science, where it remains on exhibit today.

The military implications of Blériot’s flight were also not unnoticed. For centuries England had depended upon her Royal Navy for protection. Now, Blériot had demonstrated that a potential enemy did not need to go through the seas: he could go over them. “Britain”, concluded one newspaper headline, “is no longer an island.”

With the success of the cross-Channel flight, the Model XI became the most widely-produced airplane of the time. Before the end of 1909 Blériot had already sold over 100 copies, and opened up a chain of flight schools across Europe and America (flight lessons were free with the purchase of a Model XI).

New versions were produced. The outdated wing-warping system was replaced by ailerons. The “trainer” version had shortened wings to specifically prevent it from taking off. Student pilots would begin their instruction by running the aeroplanes across the grass without leaving the ground. Once they had mastered the ability to control the aircraft with the rudder pedals and keep it in a straight line, they moved to the full-powered flight version and learned how to perform controlled turns. It typically took between two and six weeks to learn how to fly a Model XI.

The military also took an interest, and was provided with an enlarged two-seat version for a pilot and observer. The French Army began using Blériots in 1910 as artillery spotters and scouts, and a few Model XIs found their way to Mexico. In 1911 Italian pilots in North Africa began dropping grenades out of the cockpits of their Blériot spotters, in what may be the first examples of aerial bombardment. In Britain, the Royal Flying Corps purchased several Model XIs in 1912. A naval seaplane version known as the Blériot XI-2 followed. As more powerful engines like the 70-horsepower Gnome became available, they were fitted to the Model XI airframe. When the stresses caused by the bigger engines and faster speeds proved to be too much, causing a number of fatal accidents, Blériot modified the design by strengthening the wing spars and adding stronger bracing wires.

The Blériot factory produced and sold Model XI’s right up to the start of the First World War, and several hundred more were produced from factory plans by amateur builders. Today, over a dozen original Blériot XIs survive in museums in the US, France, England, Canada, Sweden, Argentina, and Spain. The aeroplane exhibited in the Smithsonian Air and Space Museum was flown in air shows by John Domenjoz, an instructor at one of Blériot’s flight schools. It was built in 1914 and has a 50-horsepower engine. In England a Model XI, built in 1909 with a 3-cylinder Azani engine, is believed to be the oldest-known aircraft still in flyable condition. In New York, the Old Rhinebeck Aerodrome has two Model XIs, both flyable, one of which was built just a couple weeks after the one in England. One of the Rhinebeck Blériots still makes regular demonstration flights.